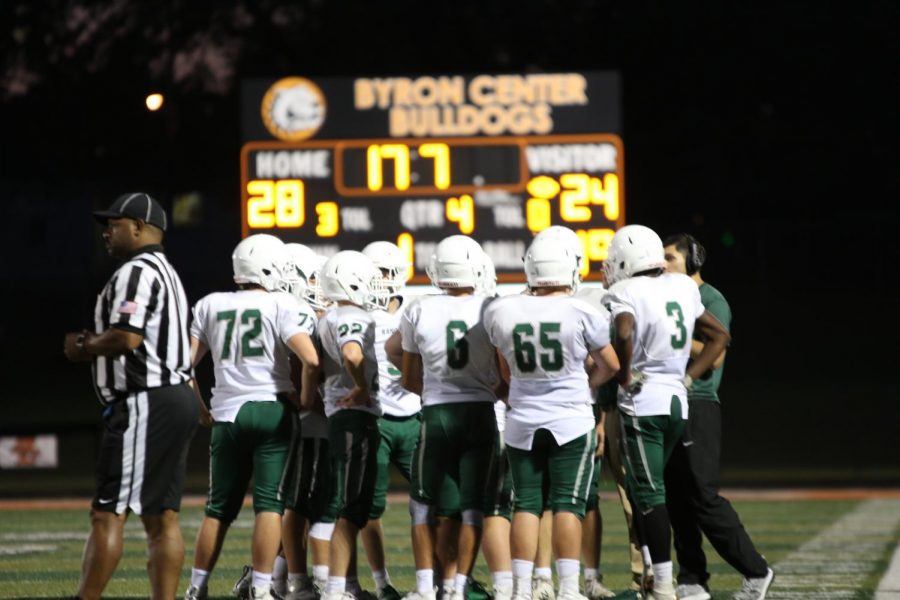 As the buzzer sounded ending the JV football season, the team could be nothing but proud of the improvements they made throughout the season.

Entering the season, the Rangers knew they had a very difficult test in their non-conference opponents. In the first two games against Jenison and Byron Center, missed opportunities and simple mistakes cost the Rangers two wins against opponents they could have beat.

“[The first two games] really sucked because we knew we should have won,” sophomore Sam Tuori said. “The losses really made us hungry for wins, but it was also upsetting knowing that if we had played to our best abilities we could have won.”

Facing Grandville in week three, the Rangers were aware they had a grueling opponent in the Bulldogs. From the beginning, FHC was absolutely dominated everywhere from the line of scrimmage to the passing game. The 48-0 loss was unacceptable for these players, even against a very good opponent. For the Rangers’ season to turn around, something needed to change.

“After the loss to Grandville we realized we needed to step things up,” sophomore Maguire Mahacek said. “We knew we were not nearly as bad as our record showed.”

The following game would end up being a season-defining game. With a loss to rival Forest Hills Northern, confidence would surely have decreased among the team members.

The game against the Huskies ended up being anything but that. From the get-go, the Ranger offense looked strong everywhere. Not only was the 34-26 win a momentum-building game for the team, but it also held breakout performances from sophomore star offensive weapons, quarterback Carson Mocherman and running back Sawyer Bosch. Carson had 3 total touchdowns, with 2 coming in the air and 1 on the ground. Sawyer also showed his value with his 2 running touchdowns.

Even though FHC gave up plenty of points, the Ranger secondary made up of sophomores Evan Van Artsen, Luke Matelic, Maguire Mahacek, and George Cobb showed they can lock down the opponents’ wide receivers. Evan even added himself to the box score with a pick-six.

After the Northern game, spirits were high among everyone. The locker room was filled with joy, as a win against off-field friends and cross-town rivals is always motivating.

Building on the momentum from the Northern game, the Rangers returned home for another huge game. In the 35-17 win, Carson ran for 3 touchdowns, with 1 coming off a huge 67-yard breakaway. In this game, Carson really established his role as a key part of the offense with his stellar run and pass games. Most defenses don’t come in expecting a dual-threat guy in the shotgun, but Carson was exactly that all year.

“[All my success] was without a doubt because of the offensive line,” Carson said. “They had great blocking all year, and without that there would have been nowhere for me to run.”

Following the shoulder injury of starting varsity quarterback Luke Majick, Carson got his chance on varsity. With Carson being pulled up, Maguire stepped in ready to take over right where Carson left off. Luckily, Maguire was ready for the opportunity and stepped up with confidence.

“It wasn’t difficult for me to adjust to my new role,” Maguire said. “We rotated in practice constantly, so I knew what to do.”

In his first start, things didn’t go to plan. Facing Cedar Springs, who runs the same style offense as Grandville, the game was full of big runs from the Red Hawks and turnovers from the Rangers. This rough game resulted in a 44-7 loss.

In the next game against the Ottawa Hills Bengals, Sawyer had his best game of the season, as he ran for 3 touchdowns. The running game made its return to stardom, as 2 touchdowns also came from the ground, ran in by sophomores Isaac Gurley and Cam Roth. The offensive line blocked very well, comprised of sophomores Sam Tuori, Aidan Paciorek, Jason Downey, and freshman Parker Vredenburg.

“The offensive line’s ability to communicate with each other was huge to provide holes for the running backs,” Sam said.

Once again, this time in week eight against Lowell, the Ranger offensive line and running game shined. In the 33-8 win, Sawyer had an even better game than against Ottawa Hills that included 3 touchdowns and a huge 47-yard run.

“The offensive line blocked so well for me,” Sawyer said. “We really had a lot of chemistry, especially later in the season and that really showed against Lowell.”

The Rangers looked exceptional on both sides of the ball, giving up only a touchdown to the Red Arrows. The defensive line of sophomores Mason Wiltz, Aidan, and Jason shut down the run game and put quick pressure on the Red Arrow quarterback. All around, the line of scrimmage was dominated by the Rangers.

In the season finale, FHC consisted of both the JV and freshman football teams. With some of the stars from JV being pulled up to varsity for the week, this game provided  a chance for some other players to shine, especially some of the freshmen. The combined teams would end up winning 48-20 over Greenville, closing the season off with a dominant win.

The team improved constantly throughout the year, finishing with an overall 5-4 record, winning five of the last six games.

“The season as a whole was a good one for us,” Head coach Ty Hallock said. “We improved tremendously as a team and individually. The guys worked very hard on the end goal of becoming the best person on and off the field.”

Going into next year, most of the guys on this team will be moving up to the varsity level. Even though they had a successful end of the season, there still is plenty of work to be done. To adjust to the higher level of play, there are things to do in the offseason for players that are beneficial, such as the weight lifting, conditioning, and participating in other sports.

However, Hallock is more concerned on the men these players are going to become.

“My hope is that [the players] realize it is not just about football,” Hallock said. “Rather, [it’s about] making a difference in the classroom, in the community, and lastly on the field.”