Beyonce and Bruno Steal The Show at Super Bowl 50 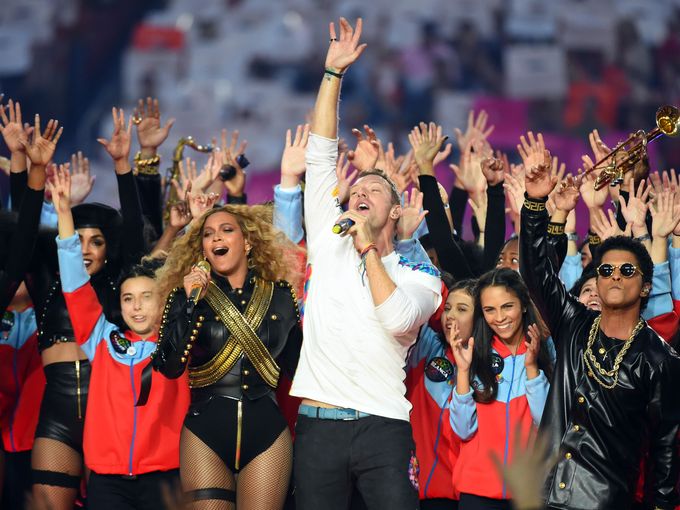 There’s no question in my mind that Beyonce stole Super Bowl 50’s halftime show from its headline act, Coldplay. Coldplay started out with their big hit, Viva La Vida, and the crowd noise drowned them out. Their lead singer Martin is an energetic performer, though an awful lot of his energy went into jumping. But he, and his song’s lyrics, just seemed overwhelmed by the stadium and the event. The marching band that accompanied him reminded everyone of a high school marching band. The idea to incorporate the youth was admirable but failed to impress.

The colors throughout the whole performance might have confused many people; some people have said that Chris Martin’s shirt looked like it came from Mexico City. Many other people commented about the colors and flowers that engulfed the field as Coldplay played. Most Super Bowl performances have a theme that they follow and goes with the music but this had many people confused. The end of the performance answered everyone’s questions, but the influence could have been much greater had they shared the message in the beginning.

The headline act only played parts of two songs before the real entertainment arrived. Bruno Mars, a Super Bowl halftime veteran, a performer who seemed to know how to make best use of the stage he was given. In other words: dance, because no one in the crowd is going to be paying much attention to the singing. Singing his hit Uptown Funk with his posse instantly changed the mood of the crowd and saved the sinking ship.

As the cameras panned across the stage to left field, Beyonce emerged. Backed by a her usual dancers, the singer stomped across the stadium grass as she delivered her new song Formation along with the song’s intense message of radical black positivity. She moved onto the stage and slipped but casually continued on so much so most people didn’t even notice in real time. Bruno and her met on stage and the two sang back and forth, giving immediate pleasure to those that were watching.

The whole performance came alive when Beyoncé and Bruno Mars arrived. Then Chris Martin came back again. Once again the singing couldn’t be heard and there was no more choreographed dancing. The final part featuring Coldplay’s Fix You showed past Super Bowl performances which distracted those watching at home from the jumping that was occurring on stage.

Then Beyonce and Bruno Mars came back on stage once more to end the show. Overall, Coldplay’s performance was nothing special but got the job done. If Beyonce and Bruno Mars had not performed it would have been a failure. The final shot of the show featured the fans in the stands spelling out “Believe in Love” in many different colors, obviously an ode to the steps our country made in the past year. Despite the powerful message behind the performance, nothing could outshine Beyonce. And as if her performance wasn’t enough to excite her fans, her “Formation” world tour was announced via Twitter just seconds after the screen cut to black.