Varsity football battles through adversity to end season at 5-5 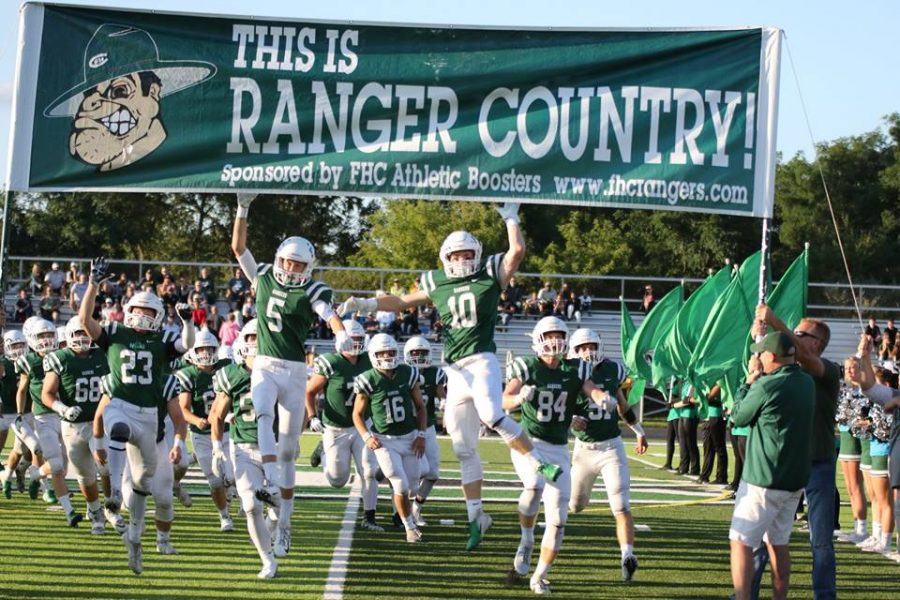 High expectations, lack of experience, and talented opponents created a tough road for the varsity football team at the beginning of the 2018 season. After a historic 12-1 and State Semi-Final finish last year, in addition to big-name returning seniors Cam Deines, Tate Hallock, and Luke Majick, the Rangers were ranked #1 in the area and were a top pick to make it to Ford Field this year. Some heartbreaking losses and injured starters left FHC with a 5-5 (4-2) record and third place in the OK White at the end of the season.

“The goal ever since we lost last year was to get to Ford Field [for the State Championship],” said Luke, who was one of four captains this year. “We have put FHC football back on the map, so [we are used to] the high expectations and handled them pretty well.”

FHC’s season-opener came on the road against a very talented Jenison team. Overall inconsistent and sloppy play from the Rangers was salvaged by a couple big plays throughout the game. An impressive game from Luke at quarterback, a blocked extra point to prevent a tied game, and an interception from senior Evan Metaj in the final seconds were the highlight-reel plays that allowed the Rangers to squeak by with the 21-19 win over the Wildcats in a very underwhelming first performance.

The next two games consisted of back-to-back heartbreaking losses on FHC’s home turf.

A well-played game on both sides of the ball from the Rangers – that began with a Tate Hallock touchdown on the opening kickoff – came down to one play in double overtime. FHC faked an extra point attempt and came up just short of the two-point conversion to lose 42-41 against West Ottawa.

The next week against Grandville was like deja vu for the Ranger faithful. A touchdown was scored on the opening kickoff once again, this time by junior Jackson Clay, and the Rangers went for a two-point conversion late in the fourth quarter but, again, came up short and lost by one point, this time 37-36 to the Bulldogs.

“I think [those two losses] increased our fortitude,” head coach Tim Rogers said. “We were kind of bitter over it rather than feeling sorry for ourselves, and I think it galvanized us to work even harder to not let that happen again.”

FHC was able to bounce back and lights-out performances from Luke, with 241 passing yards, and Tate, with 3 touchdowns and 173 receiving yards, propelled the Rangers to a 49-21 rivalry win against Forest Hills Northern.

Luke suffered a shoulder injury on the first drive of the game the following week against Northview, and a depleted Ranger team suffered a 33-0 loss to the Wildcats.

“Luke was one of the best quarterbacks in our area this year because of the fact he could run the ball just as well as he could pass the ball,” said Tate, another captain this year. “He was a very athletic quarterback who could do anything. Losing him was huge for our offense because he was hot and on a roll, playing some of his best football.”

The following week left FHC in a tough situation; the team’s starting quarterback was out, it was the Homecoming game, and the Rangers were facing a very talented Cedar Springs team with a deceptive offensive. The defense stepped up to contain a typically high-scoring Red Hawk offense, and backup quarterback junior Jimmy Scholler gave a solid performance; given the circumstances the Rangers did all they could do. The 24-14 loss to the Red Hawks put FHC at 2-4 over halfway through the season.

“We knew we were playing without Luke and that was a tough situation to put Jimmy in,” Rogers said, “and I thought [Jimmy] did his best and gave us an opportunity to win, but we didn’t have enough ammunition to win a tough game like that.”

At this point, the mindset of the players shifted and they were focused on one thing: winning the next three games. With three easier opponents lined up and a playoff berth on the line, the Ranger offense put up big numbers for the remainder of the regular season.

“We really just took [the losses] personally and knew we had to change something the last three games so we could make the playoffs,” Tate said. “That Sunday after the [Cedar Springs] game we had a captains meetings and changed our mindset right away.”

FHC walked away with a 55-20 win over Ottawa Hills thanks to outstanding quarterback play from Jimmy and sophomore Carson Mocherman, with 3 touchdowns apiece that night.

The next week the Rangers went on the road to Lowell Stadium and made history. A 4-touchdown game from Jimmy conducting the offense led FHC to a 35-10 road-win over the Red Arrows for the first time since 1999.

“Jimmy did awesome while I was out with my injury,” said Luke about his quarterback counterpart. “For playing receiver up until that point and just stepping into that role with barely any reps showed how great of a player he is.”

An all-around great team performance, capped off by a 93-yard touchdown run from senior Logan Wedder, gave FHC a 55-0 win over Greenville and a shot at the playoffs with a 5-4 record.

For what would be the last game of the season, Luke returned to conduct the offense on the road at Mona Shores for a do-or-die game. The Rangers played solid football for three quarters of this game, and while the effort never lacked, FHC made some fatal mistakes that resulted in a down-to-the-wire 34-28 loss.

“We made too many mistakes,” Rogers said. “You can’t make that many mistakes against a good football team. We had our opportunities to win and we didn’t capitalize; that’s the reason we lost. We’re going to look at some of the things that went wrong in the offseason and it’s going to make us a better program.”

This 2018 roster was senior-heavy and many players were key on both sides of the ball. Seniors Kyle Collar, Kyle Wojczynski, and Justin Hoving were two-way players that were especially important at stuffing opponents’ run games on defense. Even with missing four weeks out of the season, Luke put up big numbers in each game he played since he took over at quarterback early on in his junior year. Tate was a go-to receiver all year, while Cam got the job done at running back. Tate and Cam were both lock-down defenders as well.

“The seniors showed great work ethic and great commitment to football,” Rogers said. “I think they were a shining example of what it’s going to take for us to win a State Championship around here in terms of their effort in the offseason.”

While the football program graduates 15 seniors, the future looks bright for seasons to come. Jimmy and Carson Mocherman are standouts at quarterback that will give FHC a productive offense next season, and there are multiple talented quarterbacks at the freshman and JV level that will be coming up. Jackson has already made a name for himself and will be a key receiver next year, and sophomore running back Joey Wise has had his own solid runs already this season at the varsity level. Linemen juniors Brandon Weiskopf and Wyatt Engler and sophomore Carson Deines all started this year and will provide a solid base to rebuild the line next season.

“The juniors did a great job this year, especially the ones that really stepped up,” Tate said. “Now that they are comfortable playing on varsity, they just need to bring the same energy next year.”

Despite not finishing the season as successfully as hoped, the 2018 varsity football team battled through heartbreak, injury, and adversity and never let up an ounce of effort all season. The future is bright for the football program and next year’s roster will look to go deeper into the playoffs and hopefully make a run to Ford Field.

“Next year we’re going to do a better job of hopefully contending for the league championship,” Rogers said. “In order to do that we’re going to have to come out of the season with a better record than 5-4, which then will set us up for some playoff games.”