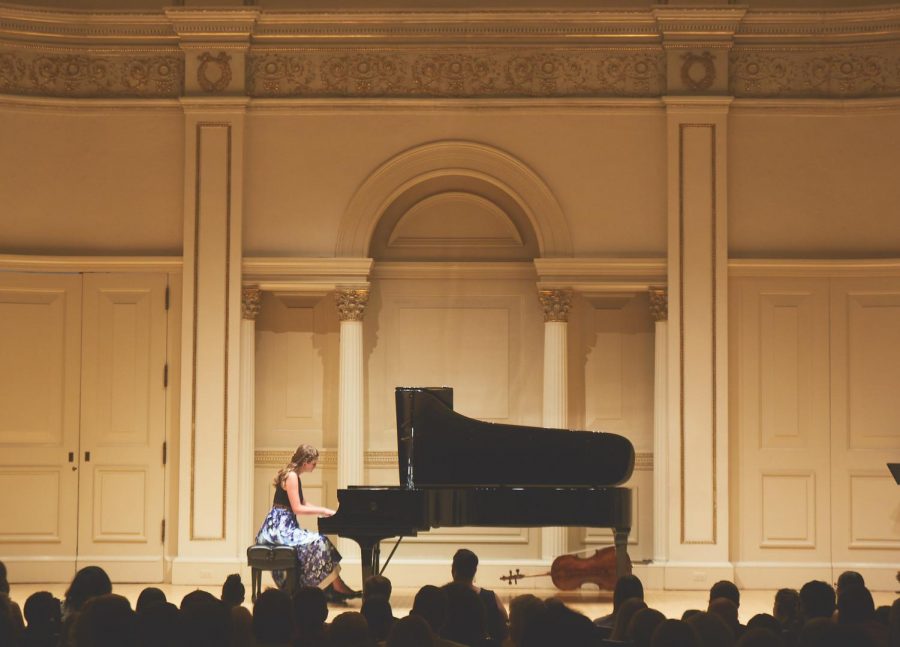 This summer, with her dream of performing at Carnegie Hall just a week away and her ideal piece perfected after over a year of practice, sophomore Katie Ritzema was ready for her shining performance. The tendonitis that quickly emerged in her wrists, however, disordered her plans and abruptly terminated her vision in the blink of an eye.

“It just hurt so bad,” Katie said. “It felt like someone was sticking a knife in and twisting it, and then my arm was all tense. I tried playing the whole song, and I was like, ‘No, my arms are about to fall off.'”

Katie made an executive decision and decided to play a much slower, less technical piece for her performance at Carnegie Hall. While at the time, it seemed like the year of tireless effort had gone to waste, in the long run, it was the right decision for her. Had she performed her complicated Beethoven piece, the tendons in arms might have been tightened to the point of bursting, bringing her seven-year piano career to a staggering halt.

This seven-year journey began on February 1st, 2012, a date that is forever ingrained within Katie’s mind.

“February 1st, 2018,” Katie said reminiscently. “It’s really hard to forget. In third grade, a bunch of my friends [and I] started playing the piano; but I think it was different for me. Their parents made them do it, and I was the one that really wanted to do it. All my friends ended up quitting, but I stayed with it.”

Since that life-changing day, Katie has spent thousands of hours at her piano fine-tuning her craft. Surrounded by bookshelves full of music, she’s progressed from simply starting lessons at eight-years-old to fully grasping music theory and tackling the most complicated of harmonies.

The culmination of Katie’s efforts was her aforementioned performance at Carnegie Hall in New York City this summer. While her tendonitis inhibited her from presenting her first-choice song, the open performance event was a critical turning point in her musical career.

“I feel like I’m not scared to perform now,” Katie said. “I’m playing the national anthem at the [Ranger Strong] assembly, and I just found out I’m doing this. [It’s] very short notice, but I’m really not nervous at all. That’s weird because I thought I would be, but now, after performing at a really important place, I’m not that scared.”

Since her performance this summer, Katie’s confidence has flourished, and she’s routing her passion into sharing her love for music with others. Each week, she teaches fourteen little kids how to play piano, complete with playing time, lesson plans, and music theory. Her unique job, full of responsibility, allows her to transfer her vast knowledge to smaller children who want to explore piano.

“It’s really fun because it’s like I try to not be like the stereotypical, like old lady piano teacher,” Katie said. “Like, I made a ‘Composer of the Month,’ so our composer this month is Beethoven, and that’s really cool. I’ve tried to make it more fun for the kids, so it’s not just boring.”

However, Katie’s passion for music stretches farther than just one instrument. In fact, she’s successfully conquered the three components of the musical discipline: percussion, wind, and string instruments. Her interest in percussion is fueled by her love of piano, and to complete the trio, she also began to play the flute and the violin.

Within the realm of FHC though, Katie’s focuses almost entirely on the flute, as she is a member of the concert and marching bands. Following her mother’s footsteps as a flutist in her high school band, Katie’s affinity for music has emerged through her participation in the Ranger marching band.

“I really loved the community, being a part of the band, and doing all the cool traditions that we do,” Katie said. “Especially freshman year, it was really nice to know people before you even went in, and it was a really good way to get to know upperclassmen, like [junior] Lindsey Cool. She’s like my favorite person, and we’re the last two chairs in wind ensemble.”

The band program has undoubtedly developed Katie’s skills as a member of an ensemble, but her heart stays rooted in the piano. Since eighth grade, she’s known that her future will unequivocally involve the instrument in some way.

Particularly, Katie was fascinated by a tour of the infamous Julliard music school in New York, a music enthusiast’s dream. However, she also perceives the importance of keeping her options open.

“There’s also a lot of other good music schools, mostly on the East coast,” Katie said. “So I would want to go [somewhere] there and hopefully get a degree in performance. Then, I would just be like a concert performer. But, that’s like hard to make a living off of, so I could also continue teaching.”

Katie is determined to return to Carnegie Hall in the near future and perform the song that her tendonitis abruptly inhibited her from exhibiting. In the meantime, the 88 black and white keys that constitute her piano will continue to fascinate her and keep her deeply rooted in her passion.

“When I’m playing, I’m just like in my own little world,” Katie said. “I’m thinking about nothing. It’s just about the music. It’s just around my head, and I don’t have to worry about anything. It’s just me playing and enjoying myself. And then, I really love performing because you’ve worked so hard, and I feel that people appreciate the music”