Caroline Bell strengthens relationships and finds joy in the pool 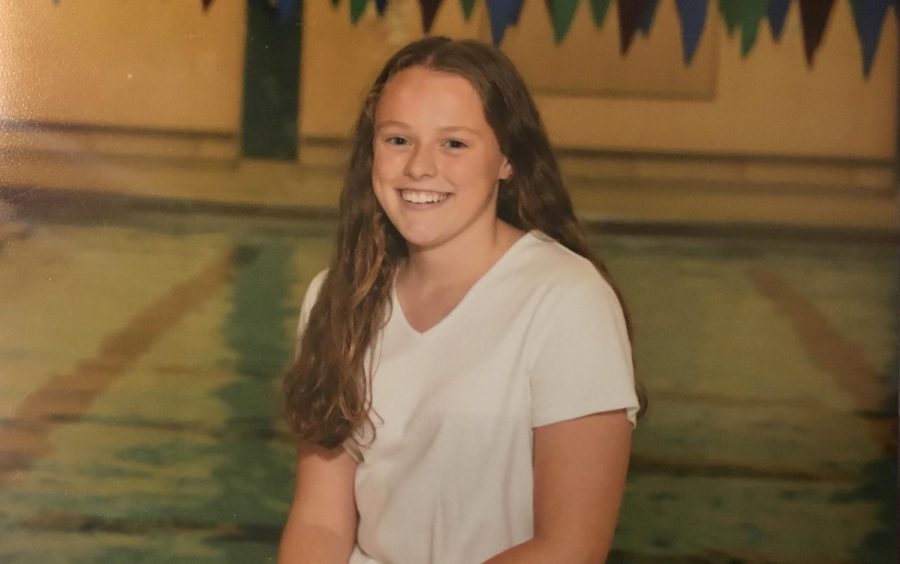 Amidst all of the fear and angst before a race, freshman Caroline Bell finds joy near the water and alongside her sister. Together, they replace fear with glee as they dance at the end of the pool lanes to hype themselves up before diving into the water below.

This expression of enjoyment is one example of many that fall into Caroline’s favorite moments of the swim season.

“It’s been really fun this year getting to know the team and everything,” Caroline said. “My best moments are probably with my sister.”

Although high school is a new element in Caroline’s life, swimming has been a lasting regularity in her world. She has been involved in the sport for ten years, and it all began with her sister, senior Katherine Bell. From the introduction to swimming as a young child, to dancing and singing on the pool deck together, Caroline finds that her most memorable moments from swimming are with her sister.

“[My sister and I] have had a lot of fun this year, and we got to know each other even more than we did,” Caroline said. “I really enjoyed swimming with her.”

She has not only become closer with her sister because of swim, but the enjoyment that comes along with swimming and being a part of the team has also continuously sprouted within Caroline throughout the season.

“It just makes me feel really good inside knowing that I’m [swimming] and have such a great team,” Caroline said.

However, the connections formed with Caroline and her teammates were only possible because of the swim team, which has also brought on a whole new set of responsibilities this year. It is a sport that demands a myriad of hours out of one’s day, which may be difficult for many students. Caroline, though, understands this and manages it the best she can.

“I really just take one day at a time,” Caroline said. “What keeps me motivated is that all of the upperclassmen that have already gone through it multiple times [often] help younger classmen. [Being on the swim team] is really time-consuming, but in the end, it’s all worth it.”

As the season is coming to a close, swimming has not only acted as the glue that has brought Caroline closer to the people in her life, but it has also taught her a life lesson: never fear something new.

This message shone through clearly during the conference meet on Nov. 9. Because she didn’t fear trying new things, her race brought her further into the competition, and that was an impressive accomplishment for her.

“I was very proud [after swimming at the conference meet],” Caroline said. “I was nervous for the 500 freestyle. I gave it all I had, and I qualified for the second day of conference with my 500 freestyle. I was very shocked because I did not train for that race, but in the end, it was all worth it.”

Outside of swimming, Caroline continues to stay connected to the pool; in the spring, she will return to the pool for the water polo season. She has been playing water polo since seventh grade, and she plans on joining the high school team when the time comes.

“I am over the moon excited for water polo to start,” Caroline said. “I get to see all of my old friends from FHN and FHE, as well [as the people] on [our] team.”

Although there is a considerable amount of hard work and time needed to play the sports that she does, Caroline’s excitement for her participation overrides all of the difficulties. In her point of view, the value that comes along with forming new friendships, deepening old relationships, and doing what she enjoys is what makes the sports what they are.

“It’s all worth it because you make so many new friends, and you get to see them every day in the pool and at school,” Caroline said. “You also get to do all of that while doing a sport you really enjoy.”