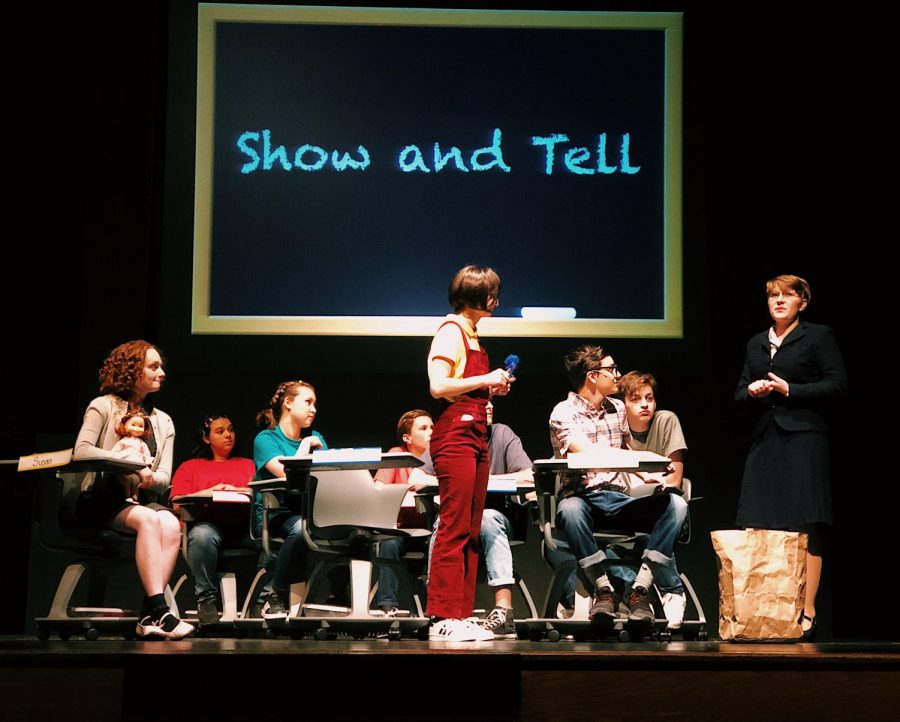 When the show Ramona and Beezus was announced as this year’s fall play, students and teachers alike were filled a whirlwind of emotions and of varying levels of excitement.

However, while the show will be a trip down memory lane for those who read the Ramona Quimby books, Ramona and Beezus will take director Robbin Demeester back to her earlier days of doing children’s theater.

“I segued away from teaching when I had kids, and I started my own children’s theater,” Demeester said. “To be back doing theater for children and envisioning scene-by-scene how it’s going to be seen through the lens of a child’s eyes [is incredible].”

Based off of the book series, Ramona and Beezus centers around rambunctious third-grader Ramona and her organized pre-teen sister Beezus. As the play continues, the audience is swept up in their lives, experiencing both their hardships and their happiest moments. Senior Gretchen Shull, who plays Ramona, especially found the plot to be heartwarming and family-friendly.

“It has a very nice message to it,” Gretchen said, “which is that all families are a little bit dysfunctional. The Quimby family goes through a financial crisis, and [even after] going through that, we’re all still a family and will still love each other in the end.”

Despite the target audience being mainly younger kids, as it is technically a children’s production, the show is still one for people of all ages, and many may find Ramona and her family to be relatable characters.

As the play is aimed at elementary audiences, it is neither too complex nor too long, making it easier for every cast member to focus their energies towards fully immersing themselves into their characters. While everyone is making an extra effort to exemplify their roles, members of the Quimby family have especially done well in personifying who they are playing, earning the respect of the directors and their castmates.

“The biggest change is watching the Quimby family gel together as a real family,” Demeester said with a sense of pride. “The actors gelling together cohesively in that family and, consequently, the characters they play has been cool. They’ve worked hard for that, and that’s been fun to see.”

This year’s student director senior Hannah Derwent also commented on the surprising diversity of the cast and the way they all fit together well.

“Obviously, it’s a big cast, and that’s unusual for a play, but we also have such a wide range of personalities,” Hannah said. “For so many of them, this is their first fall play or even their first FHC show. Watching them come together to form such a loving family has been incredible.”

Another unique aspect of the show is the usage of a projector to convey parts of a scene and even display six episodes of a filmed soap opera which features cast members. The directors spared no effort in creating these filmed shorts, pulling out all the stops to make sure they were perfect and primed to make the audience laugh.

“When Mrs. DeMeester said this show involved projection, I thought it’d be something tiny, not a huge screen in the middle of the stage [depicting] all different backgrounds,” Hannah said. “I [also] read the script and saw the commercials and the mention of a soap opera. I thought it’d just be something small, but no, we went all out for it.”

In terms of going above and beyond with creativity and technicalities with the show, booster parents and other adults involved have worked hard to uniquely advertise at the elementary schools and spread the word about the production.

One way they’ve promoted it has been through supplying every third grader at each of the FHC elementary schools with a copy of the Ramona and Beezus chapter book using donated money. In addition to getting the chapter books, a bookmark with show dates and information was also included, pushing the promoting even further.

Hopefully, because of how hard they promoted the play, the turnout out of children will be high, as their presence will elevate the show experience.

“I just love the sea of noise,” Demeester said. “Little kids are asking a lot of questions of their parents, or they’re pointing, commenting, and noticing. I love that because [that way], I know that they’re super engaged with what’s going on on stage.”

Demeester’s hope is that by attracting and targeting the younger audience members, the program will inspire them to do theater when they get the chance, a tactic that has been essential over the years in building up the program.

“I did this show so we could promote our program for the little kids in our district,” Demeester said. “I like doing a children’s show every four or five years because that’s how we get our next generation of actors here. It’s kind of our way of catching them with the ‘bug’ [of doing theater].”

After several weeks and countless hours poured into the show, the cast and crew are well-deserving of a full auditorium. As a show for all ages, Ramona and Beezus will shine this upcoming weekend and hopefully inspire all who watch it.

“It’s very humbling to even have anyone show up and enjoy a show because they’re taking time out of their schedule, paying money to come watch us, and maybe applauding because they’re enjoying what they see,” Demeester said. “That, to me, is super cool to be a part of that.”