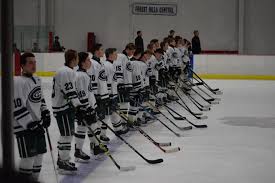 A Ranger hockey team loaded with experience will look to take the OK White conference crown this year after a great comeback to end last year. Last year, FHC got off to a rough 0-7 start. But they managed to pull through and finish with a conference record of 7-4-1, and an overall record of 12-11-1. Even though the Rangers lost a lot of senior leadership last year, they definitely have the talent to make up for the loss.

There are returning junior-powerhouses, such as Cole Beaufait, Peter Bardelli, Ryan Jeffreys, and Hayden Sarjeant. Cole was one of the top scorers on the team last year and became a starter as the season progressed. Hayden really helped the defense and overall team chemistry grow over the course of the season by stepping up in big moments. Ryan and Peter helped add depth to the team, adding talent to the second and third lines.

Although the juniors had some pretty big roles on the team last year, their role this year will be even bigger.

“We did lose some key seniors,” Peter said. “But we all need to step up now and play our role.“

The defense will also be important for the Rangers, as they look to rely on a more experienced goalie in Carl Mielock. As a junior, Carl had an 89.7 save percentage and really improved throughout the season. A defense is what the Rangers just might need to go far in the playoffs.

“This year’s defense is more experienced and stronger than last years,” Carl said. “Last year we struggled a little defensively because of inexperience, so this year should be much better.“

Carl leads another great class of seniors for Ranger hockey. Returning seniors such as Josh Koets and Cooper Morton will be critical in order for the Rangers to succeed this season, as these two were big contributors on offense last year.

FHC also gains a lot of new talent to go on with their experience, which includes sophomores Collin Ward and Xavier Ott along with freshmen Jacob Munger and Lucas Jeffreys. In order to help the team, these new players are going to need to contribute the same amount as the new players did last year, and also help fill a big hole from the seniors that left last year.

Last year, FHC opened up with a tough schedule of 7 very good teams including Grand Rapids Christian, East Grand Rapids, FHNE, and St. Ignatius from Ohio. The Rangers start out with an easier start, easing into tough opponents such as EGR and Grandville who will come later in the season.

Tough matches for FHC comes late in the season, where they will have to face Catholic Central, EGR, and FHNE all in less than a month. The Rangers were 1-4-1 facing these teams last year, but look to win these marquee games with the talent on the roster.

The Rangers open up on the road against Lowell-Caledonia. FHC defeated LC last year 2-1 in overtime. With a more experienced team this year, the Rangers should be more composed out on the ice.

Opening night for hockey is just a few nights away and seniors like Carl are excited for their last season as a Ranger.

“Our team looks ready to go,” Carl said. “We are excited for our first game next week.“