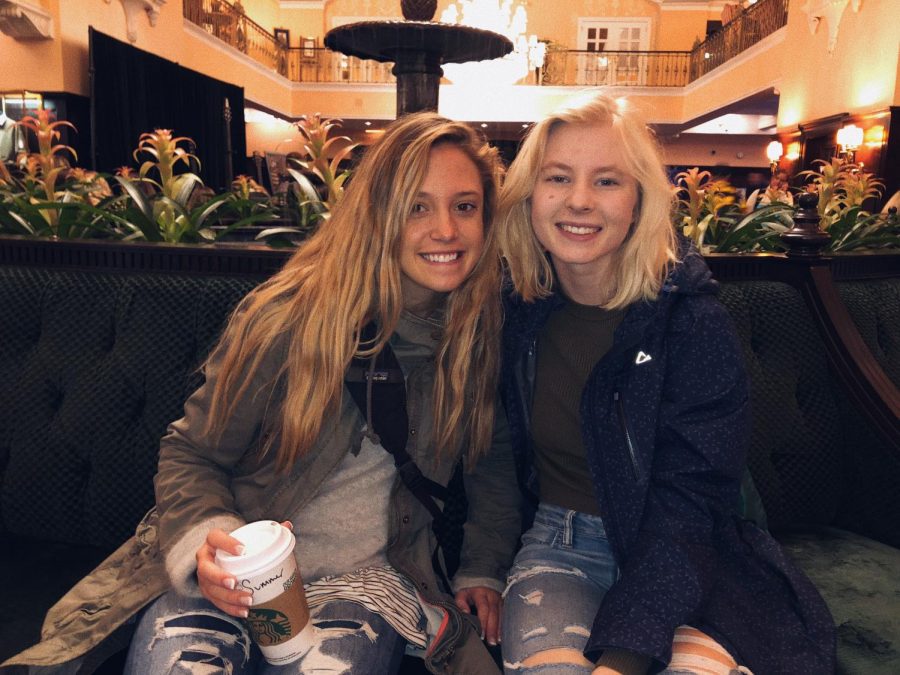 Senior Adrianna Donald has been gifted with one constant in her life: art. It’s something that has always just been there for her; it’s a passion that has fueled her academic life so much so that she is now taking a few art classes downtown at Kendall College.

“I grew up drawing and painting, and it became apart of my life,” Adrianna said. “[Art is] a creative outlet. I do it when I’m bored, on assignments, when I’m stressed, and for a way to express myself.”

One of the reasons why art has been so prevalent in Adrianna’s life is the flexibility in her schedule and the room that it has given her to pursue her interests. However, not every other student has been as lucky.

For many, the pressure of AP courses, two-hour blocks, and filling graduation requirements have been paramount to taking more, for lack of a better term, fun classes. Seeing this, Adrianna and her friend, and fellow senior, Summer Wetherbee decided to create a way for other students to experience art.

“We’ve always had the same mutual love for art,” Summer said. “We were just talking about how not enough people are in art at our school, and it’s because of how people don’t have enough time in their schedule to fit it in with the rest of their curriculum. So, we’re talking about how cool it would be to do an art club.”

The school’s new art teacher, Tyler Fewell, overheard the two girls discussing the potential club and immediately expressed his approval of it. Fewell sent them to the principal’s office, and after a short bit of paperwork, the art club was born.

“Summer and Adrianna are excellent individuals to start such a club,” Fewell said. “They both bring a robust portfolio of experiences in the art realm while remaining grounded enough to discuss creative ideas. I expect them to do an exemplary job of balancing an art club that needs to be accessible enough for students of any background while also crafting appropriate goals that push the group to succeed to their collective potential.”

For both of these girls enrolled in AP art, the decision to start an art club was not an arbitrary one; however, they didn’t always know it would play out this way.

“In some ways, [the decision to start the art club] was very spontaneous,” Adrianna said. “I had been thinking about starting up an art club a lot during summer. I didn’t think it could possibly work out, but Summer mentioned something about starting one up, and it went on from there.”

Yet, no matter what the group eventually chooses to focus on, the main focus of the club has already been chosen. The art club’s goal is simply to inspire students to be more creative and to engender this creativity around similarly wired people.

“Art club is focused on creativity, and that can be expressed in many different ways, such as drawing, film, photography, and so many more,” Adrianna said. “The club is about being around like-minded individuals in an environment that is supportive and encouraging.”

Indeed, both girls have a like-minded, deeply rooted love for art that has fueled their journey to bring the art club into fruition.

“I have always liked art to be an expression of my feelings,” Summer said. “I think that it’s just like that some people have stress relievers and mechanisms that help them [to get] through things. I always used to turn to art, but now I just find it a passion.”

Her passion, along with that of Adrianna’s, will hopefully transfer into the hearts of other students. The need for an artistic opportunity that is available for all students is increasing. Fewell wholeheartedly agrees with that sentiment.

“I believe FHC needs an art club in order to provide a more open-ended artmaking atmosphere for students interested in a creative field,” Fewell said. “[Also], to connect those artistically-inclined students with like-minded peers that they might otherwise not get an opportunity to engage with. Art club has the unique potential to serve a duality of students: those already heavily involved in the art department and are looking for more excuses to be creative and those who have not yet been able to enroll in an art class, but are interested in a more casual experience.”

At the core of the entire club, the most important theme is spreading the power of art. In both Adrianna and Summer’s eyes, the school may not have put in as much effort into art as it has to other activities, but they believe they can do something about that.

“I’m hoping, with starting this club, that art can reach more students,” Adrianna said. “There’s not a lot of focus on arts, and I feel that it’s about time that changed.”