Even having been legally dead won’t stop Abbey Stone 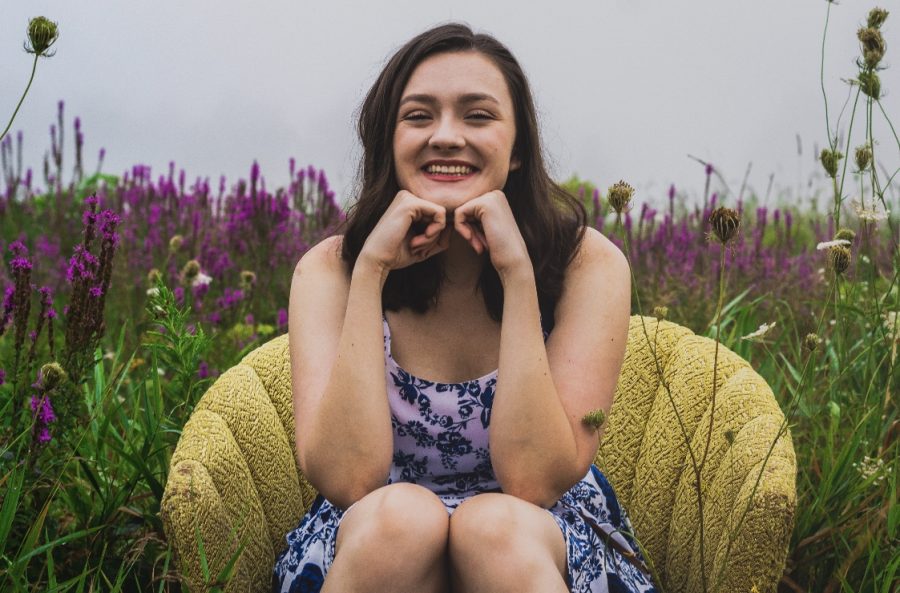 With a flat-lining heartbeat, senior Abbey Stone was legally dead for seventeen minutes.

Instead of partying, laboring over textbooks, or spending the beginning of school going to grab food with friends, Abbey spent the first two months of her junior year as a recurrent patient at the hospital that left her drained.

“I don’t like playing the ‘Why me?’ card,” Abbey said, “because there’s always someone worse off than you, but it was a lot.”

On a day just like any other—except for the added stress of it being the first day of the infamous junior year—Abbey woke up with a pounding headache.

Before this fateful morning, these kinds of headaches were a common occurrence leading up to the start of the school year; however, instead of digging deeper into the cause, Abbey chalked it off as migraines.

“Migraines run in my family,” Abbey explained, “so I was like, ‘It’s no big deal.’ But on the first day of junior year, I threw up all over my room.”

To anyone who saw her, Abbey seemingly had the flu. In order to rest, she took the first and second day of school off in hopes of beating this sickness.

Yet, just one day later, everything changed for her.

“On the second day of school,” Abbey said, “it [was] terrible headaches; [I was] constantly just throwing up and everything. Then I couldn’t respond to basic commands, like [I] couldn’t walk.”

Losing control over her body, Abbey was subsequently ambulated to the children’s hospital. Full of shock, trepidation, and fear of the unknown, she then received her diagnosis.

Abbey had a cyst on her brain.

To prevent any further ailments, she was rushed into surgery. While under anesthesia, Abbey’s life became endangered. Her blood pressure and heart rate rocketed through the roof.

Unbeknownst to her, as she had blacked out on the way to the hospital, Abbey legally died during this surgery. She had no recollection that she had even gone under. Waking up to a panicked scene in the ICU with a shunt in her head felt unreal, but having the support of friends and family kept her grounded.

“I don’t want to say I felt okay because I remember the [good] things more than the bad things,” Abbey said, “but really, I could still talk to my family and people were coming to visit me. I was pretty positive through it all.”

“The whole time I was just really positive about it and everything,” Abbey said. “Honestly, that’s what really [helped] me through [it]. Watching TLC and the Food Network and having my family around; you can’t get yourself weighed down.”

One week later, Abbey was back in surgery, this time remembering all that happened. Unlike the previous one, everything was going perfectly. With a speedy recovery, Abbey returned home.

Once home, she faced another hardship just under a week after her arrival: her incisions were leaking spinal fluid.

Upon the request of her neurologist, she was later admitted to the hospital that day, and she was once again experiencing excruciating migraines. On that day, her bad fortune struck again, and she was told she had bacterial meningitis.

“It was just this entire cycle of the worst headaches, nausea, throwing up, and then these bed-rattling fever shivers,” Abbey said. “[I] was shaking. It was nuts. It was this constant cycle.”

Bacterial meningitis is a rare disease only affecting around 200,000 people a year. Usually caused by a kind of infection, this illness causes an inflammation of the brain and spinal cords.

Back to where she once was on the second day of school, Abbey was due to spend another period in the hospital while receiving antibiotics and treatments for bacterial meningitis.

“I had pictures of me where I [look annoyed] because it’s like, ‘Why am I here [again]?’ ” Abigail said. “I feel like I’m pretty go-with-the-flow and lighthearted, so at the same time, I was kind of like, ‘It’s whatever. I can skip school and watch TLC now. It’s fine.’ ”

Taking it all with a grain of salt, Abbey used that additional week in yet another hospital bed to take it all in. Being out of school, the routine that she had been trained to be used to since kindergarten left her feeling out of touch.

“It was kind of upsetting because all of the Homecoming festivities like lip syncs happened,” Abbey said, “and I was watching people’s [Snapchat] stories, and I’m like, ‘Wow, I’m really missing out on a lot here.’ That’s what made me really sad. It’s school, yeah, but it’s also your friends and really your tie to the outside world when you’re a teenager. It was kind of upsetting at first.”

Being trapped in a pristine room would have destroyed Abbey’s hopes; however, she had a supportive group that kept her going. Comprised of her family and close friends, the steady stream of companions consistently visited to help combat loneliness.

And even if she was feeling isolated—which she was after being deemed a producer of a form of bacteria—her upbeat attitude kept her trudging along through these challenging months. Whether it was having friends check in on her or simply learning to adapt, Abigail kept her chin up as high as her incisions would let her.

“It was a different location, but I was still the same person,” Abbey said. “I just knew that I had to get through it, and nothing was going to stop me [from doing] that. Whatever happens, happens. I just kind of stuck with that.”

Persevering at this testing time allowed for lessons that she could have never learned from a school textbook. What was supposed to be a stressful year academics-wise morphed into what appeared to be a battle against unfavorable odds.

Every day spent in the hospital room or easing back into the swing of life through receiving antibiotic infusions demonstrated just how strange and fragile life can be, and Abbey is determined to enjoy every high and low that comes with her final year of high school.

“I’ve really found myself living more,” Abbey said. “I’m still very Type-A, but before everything, I was just like, ‘Everything has to be a certain way, and you can’t take any risks.’ Now I’m much less afraid. I used to never like cheesy movies and books; I used to never cry, and now I get emotional and feel more connected to other people. It’s almost like a fresh start.”