Senior tiles add color and personality to the halls 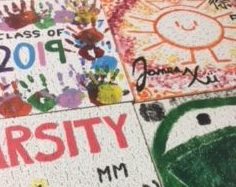 “Varsity dance” is painted in bold red and green letters that stand out against the crumbly white background. A girl leaps in the center of a circle, composed of the initials LL, RN, MM, and AZ. Neat brush strokes that spell out “#dropdown” and “#bounce” encase the sides.

FHC seniors have added color to the halls by painting ceiling tiles for four years now. No tile out of the 125 tiles painted this year is the same. They each have their own meaning and significance.

For Lindsey, her simple tile represents her long-lasting friendship with some of the other dance team members.

“I did my tile with three of my best friends,” Lindsey said. “All of us are on the dance team together, so it’s the four seniors. We have been through [a lot] together, and that was meaningful for us.”

Ever since freshman year, she has seen the variety of personalities depicted on every tile, each one bringing joy to the halls.

It didn’t take long for her and her friends to get hooked on the idea of making one together in the future.

“I looked at them every time I went to Spanish or something, and I just thought the seniors were so cool,” Lindsey said. “I was excited that I would have [my] turn one day too.”

His tile consists of many things, ranging from multi-colored handprints to a large pokemon-like creature.

“I think it really spoke to [who] I am as a person and what life is in general,” Breezy said. “You might start off with a plan and go somewhere, but then it kind of transforms over time, and it changes.”

Not only is his tile spontaneous and diverse, but it allows those who pass by to be creative.

Social studies teacher Laura Stiles showed her Ranger pride by helping out with the senior tile preparation. She also helped the students during the process of painting them in the gym. It took a lot of time and hard work, but for her, it was worth it.

“When I sit there and watch those kids do the tiles, it’s really neat,” Stiles said. “You can just tell they’re doing something for themselves but at the same time, something for the school.”

Senior tiles create a way for everyone to be a part of the school community in their own way. They provide an opportunity for seniors to put themselves out there.

“It’s just a neat last chance for seniors to have a little spot in the school to show what makes them special,” Stiles said.

Leaving a mark on the school, even if it is for less than a year, is important to the seniors. It is a way of saying goodbye to the whole school. The tiles help the upcoming graduates have a memorable last year of high school.

“I think it’s going to be a fun thing to reminisce on and to look at when I’m going down that hallway,” Lindsey said.

Not only are the tiles themselves priceless, but the experience is as well.

“It was almost like a High School Musical kind of moment, where it [doesn’t feel real], but it’s actually happening,” Breezy said.

The senior tiles are a great activity to create memories. It’s something that the seniors can have fun with and the underclassman can look forward to.

“Let me be honest; it’s 2019, and we all talk about [how] high school’s going to be over soon,” Breezy said. “We’re going to forget about this, so we might as well enjoy it, while we have it, before it’s gone.”