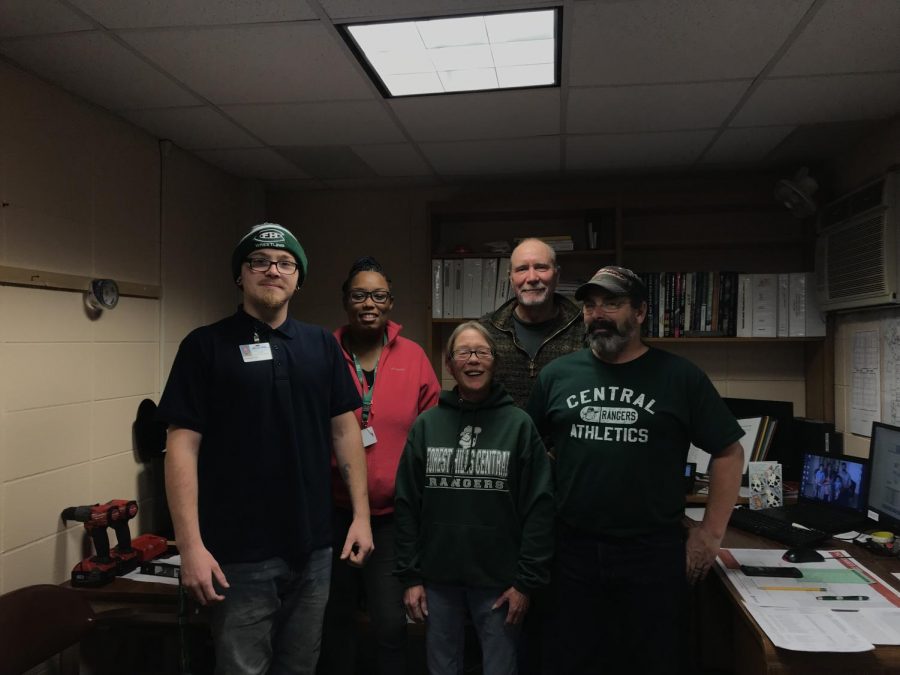 Each custodian contributes to the successfulness of the school, including Jeff Tolar, Vickie Miller, Ray Gaiser, Joe Merriman, Bryan Chaterdon, Jon Sarb, Janice Miller, and Chris Hall. Although their work is often done behind the scenes, the staff and students are very thankful for everything they do.

“I think it’s important to get to know [the custodians] personally and for them to feel appreciated for what they do,” Passinault said, “because what they do often times goes unnoticed or unrecognized. They’re a major part of what helps [FHC] be successful, [and] they’re invaluable as far as employees here.”

For the past 23 years, custodian Vickie Miller has abided as the school’s personal underdog. As the head of the 2nd shift crew, Miller’s entrance into the school every day runs simultaneously with the end of the students’ school day. Thus, this makes her an obscurity to many; however, her job acts as a critical foundation for the wellbeing of the school.

Miller finds it important to try to help people in the best way that she can. She said that she consistently tries to keep the environment of the school clean and pleasant for the people around her in order for them to not feel any stress, and she enjoys doing it. But, for her, this feeling of enjoyment hasn’t always been there while working. In the beginning, it was just another job.

“When I first started, it was just [to] come in and clean,” Miller said. “I also worked third shift, so you don’t really see anyone very often. Now, [I like to] come in and see what’s going on and what I can do [to] clean up.”

As the years went by since Miller began working at the school, a familiarity grew between her and the people who roamed the hallways.

Her perspective on her job changed, and coming to work became more than just cleaning; her job evolved into a place where she could spend time with other people and a place where the people around her transitioned from coworkers to family members.

“I enjoy going to work because it’s also like a social experience [where I can] see people,” Miller said. “I love to work. It’s cool to watch [everybody] grow, and to me, it’s almost family here.”

Her coworkers are her family, and being around these people is Miller’s favorite aspect of her job. This is her favorite part about working because, over the years, Miller has found happiness from simply talking to the students and the staff.

“[My favorite part about working] is just talking to the kids and the activities [in the school], and the staff is fantastic,” Miller said. “A lot of these people, I’ve known a long time, and they’re really great. Fun stuff like last week was great, all of the Ranger Strong things. I love those activities; everybody cares for each other.”

Helping people is a fundamental notion in Miller’s life that justifies many of her actions, and it is also another reason why she looks forward to coming to work. She has drawn from her own life experiences, which has only deepened her appetency for helping.

“I believe in helping any way you can because it all comes back,” Miller said. “What goes around comes around. I’ve been in tough situations in my life over the years, and a lot of people have helped me. There are angels out there, I believe, and everybody should help if they’re able.”

Miller continues to express her belief in the value of helping other people by volunteering at shelters as well, such as a women’s shelter near her home. In this way, her helpfulness and aid spill into the greater community.

Despite Miller’s often unnoticed and hidden help, she enjoys giving back. Working second shift, she finds enlightenment while connecting with the staff and students. Miller encounters both of these aspects in her job. Overall, it contributes to why she does what she does.

“[The custodians] love to help; we really do,” Miller said. “It’s nice to see everyone smiling and happy and to help them accomplish something. [It’s nice] seeing the kids take pride in themselves and the school. It’s really great because that’s how the world goes around, everyone helping everybody else.”

It all began in Pine Ridge, where he landed his first job. In his professional career, Tolar continued to work in a plethora of different schools that are scattered in the Forest Hills area. Last spring marked the beginning of his story at FHC, and Toler has been nestling into his position as the head custodian since.

Due to his past, moving from different schools has given him an opportunity to meet a vast number of people and gain a unique perspective on his job.

“[Changing work environments] is nice because you get to know more people, different types of people, [and] different cultures,” Tolar said. “Because [with] each building, I can sense there’s a little something different about them. They’re all great.”

With his job in the school, Tolar oversees the entire operation of the school. This includes everything from heating and cooling to mechanical problems.

However, Tolar often finds himself enjoying branching away from his defined position. With his experience working in an abundance of places, Tolar realized that his favorite part of working is the people around him. He often reaches out a friendly hand by connecting with the staff and students. He’s, simply put, companionable.

“The staff and students [are my favorite part about my job],” he said. “They’re awesome; you meet them in the hallway, and they said ‘hi.’ I like to think I’m kind of a ‘people person.’ I like to get to know someone and make friends; making new friends is the best part. [Working at FHC] is becoming more of a family feel versus a work feel.”

Tolar continues to connect with people in a similar way by helping and guiding kids in a youth group in Cedar Springs. He loves his time spent helping the youth, and it’s something that brings him happiness and gives him value.

“It’s a huge feeling of accomplishment to be able to help youth with a problem,” Tolar said. “It’s hard to explain the feeling that you get from helping someone learn to do something for themselves that they didn’t think they can do before, [but] I’ve always been the kind of person that wants to help.”

His personal devotion to helping kids deal with problems that range from trivial matters to deeper issues often runs parallel with his experience while working as a custodian. Although its occurrence at FHC has been whittled down to a small number, due to the fact that he hasn’t been working at the school for very long, it has been apparent in his old positions at different schools.

“Over at [FHN], there were all kinds of times where a kid in the hallway would tell me he has something going on,” Tolar said. “I’d tell him how to fix it, or I’d tell him how to go about taking care of it. So, every once in a while [when] it pops up, it’s awesome.”

Working as a custodian, Tolar often finds opportunities to help others when needed. Whether it is through mechanical issues or helping a student, he is there.

Tolar also served in the military for a part of his life and helped his country; however, for him, his experience in the Army centered around who he helped while there. Humility overrides his experience through it all.

“I’m not that kind of guy that likes to boast about what I can or can’t do,” Tolar said. “It’s not about me; it’s about who I helped when I did it.”

Learning from all of his past experiences, Tolar contributes to the school by bringing his companionship, his helpfulness, his humility, and many more characteristics into the building. Due to his kindness and hard work, the staff and students radiate similar kindness by welcoming him into a larger family.

“In our line of work, we always feel like we’re the outcast in the job world,” Tolar said, “but when we come [to FHC], you don’t necessarily have that feeling. You feel like you’re involved; you’re one of the family. I firmly believe that if you love your job, it makes the day go along a lot easier. It doesn’t feel like work, and with the welcoming I’ve gotten from the students and staff here, it’s not totally like work.”

With each sunrise, Miller is greeted by a kind and welcoming staff.

This welcoming feeling is something that has made her feel comfortable as she has been settling into her position since May, and it has also contributed to the enjoyable experience she finds herself in as she helps the school in unmeasurable ways.

“The teachers and the staff are very nice people; they made me feel welcomed as I started and got going,” Miller said. “The kids have been very respectful and mannerable, and so that’s also welcoming by itself. The staff’s communication has been great too.”

Her favorite aspect of her job traces itself to the staff of the school. According to Miller, the staff is wonderful because they’re easy to talk to. She said she loves coming to work due to the kindness that radiates from the people inside of the school.

At work, her job mainly focuses itself in the cafeteria. Her tasks range from cleaning the lunch room, arranging the tables, and taking care of the trash. While working, Miller has one overriding factor that motivates her to come to her job every day: her son. Her seven-year-old son is the main reason that drives Miller.

“What motivates me to come to work is my child,” Miller said. “I know I can’t live without working, so I have to get here in some type of way. But, overall, I like working here.”

Despite the fact that work is a necessity in Miller’s life, she finds working as a custodian likable because she is greeted by wonderful people on a daily basis.

With the kind people around her, she is glad to help out the school, and for her, the 22-minute drive every day is worth it.

“It’s worth the ride because I enjoy working around nice people, people that treat you equal to whichever position they have,” Miller said. “[The staff] doesn’t treat you bad, no matter what type of position you have here.”