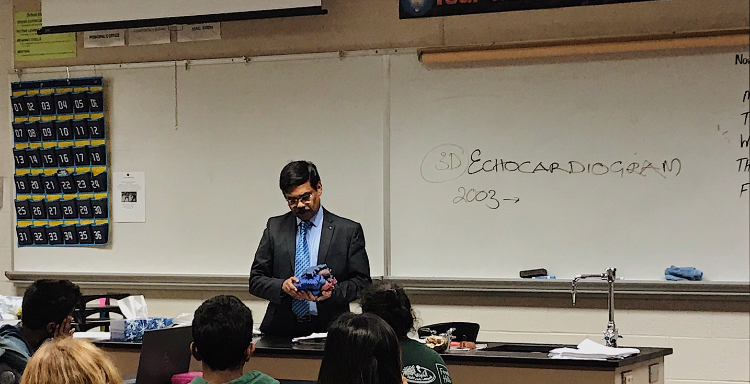 On a daily basis, he performs 2-3 life-saving cardiac catheterizations, mostly on pediatric patients, reinfusing life into several young children suffering from congenital heart defects. And that’s just in one day.

“It was really inspiring how he worked in such a variety of fields but pursued excellence in all of them,” Andy said. “He was obviously very passionate about his work. For him, there really wasn’t a difference between work and fun. He used that to become the best that he could be.”

Through recounting his numerous tales regarding his medical experience, Vettukattil relayed the story of his life to HOSA members. From growing up in Kerala, India to succeeding in his medical residency, Vettukattil spent the first nineteen years of his career developing his skills in the UK.

In 2013, his life took a drastic change, as he was personally invited by the DeVos family to pioneer the cardiology sector of Helen DeVos Children’s hospital. Since, he has made it his mission, and as a result of his work, the division has grown to sixty cardiologists, who together, can perform any heart procedure known to modern medicine.

“The community here in Grand Rapids gets world-class service if you have been born with congenital heart disease,” Vettukattil said. “The industry is very specialized here, but for me, I have a more general area of expertise. There’s no limit to the imagination that I can have.”

However, HOSA students also learned that Vettukattil’s influence extends far beyond borders. Throughout his career, he was invited to Egypt, where he performed open heart surgery to save the life of the chief of police’s daughter. He’s attended conferences all over the world, most notably in Nepal, where he headlined a national cardiology event.

Evidently, the story of his life and his resultant accomplishments inspired his listeners. Thirty-five eager, intent HOSA members had their eyes fastened on their exhilarating speaker, as dozens of hands continually popped up to ask questions.

“I thought it was really interesting how he has practiced in so many different countries, but he pioneered something in each country,” Andy said. “He really helped me cement my interest in medicine just because of his passion and everything we can still learn. Before, cardiology was just on the edge of my radar. But now, it’s really come into focus.”

The vast field of cardiology is ever-changing and more STEM-based than other fields, as Vettukattil recounted. For aspiring HOSA members, absorbing the real-life applications of science in the field of cardiology from a worldwide expert was invigorating.

“For me, when you’re dealing with human life, I don’t like to take chances,” Vettukattil said. “Cardiology is more pure science. For example, with pressure and change, there is real science and physics there, if you are intelligent enough to understand the meaning behind it. Cardiologists are proper scientists, and that’s what lured me to it.”

Along with discussing the scientology behind cardiology, Vettukattil also analyzed the innovation aspect of his job. As a trailblazer of his field, students learned that breakthroughs and discoveries are made a priority.

Amongst his many accomplishments in this facet are successful open heart surgery on one of the smallest babies ever recorded at 1.98 pounds, pioneering 3D echocardiogram technology to control pressure in the heart, and developing new techniques to perform cardiac surgery.

“I learned a lot about perseverance,” sophomore HOSA member Ayesha Jeddy said. “[Vettukattil] talked about how he faced immensely complex conditions which were thought to be untreatable. In some cases, the tools or procedures needed seemed to be nonexistent, [but] through hard work and problem solving, he was able to understand the problem [to] invent the specific tools.”

Vettukattil was just one of several guest speakers that the HOSA leadership team has lined up for its members this year. Past guests included a physical therapist and a pediatrician, as well as an EMT paramedic team lined up for the future.

As a club that hopes to instill medical experience and application in its aspiring professionals, this variety in guest speakers is aimed to make students aware of the vast diversity of medicine.

“I learned about the huge variety of topics that people can pursue in even just one section of medicine,” Andy said. “There’s still so much that we’re learning and so much we can innovate. Medicine is always growing, and it’s something we can build on.”

In the end, the lessons that Vettukattil relayed were ingrained into passionate HOSA members. Along with a sparked interest in cardiology and an increased understanding of the depths of the medical field, ultimately, students left more aware of the profound impact that a medical professional can have on the community.

“We’re exploring so many different places like space and the oceans, but we still just don’t understand what we really are,” Andy said. “I think that everyone pursues medicine for their own reasons. But in [HOSA], one of the most common ones is helping others and being fascinated by everything you can learn about yourself.”