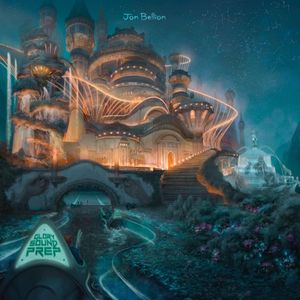 I’m sure we’ve all jammed to and kept on repeat “All Time Low” when it was released in 2016, and if you’re anything like me, you’ve only kept loose tabs on Jon Bellion. Now, he’s back with his latest album Glory Sound Prep, and there is no more flying under the radar. Bellion shows us why he should still be that artist whose music you can’t seem to rid your mind of.

Glory Sound Prep opens up with a song dedicated to his wife. In typical Bellion fashion, he sings about personal matters disguised in upbeat tunes. “Conversations with my Wife” discusses not wanting to live over the phone but in person and not be “some digital Jesus.” Bellion uses repetition to begin the track in contrast to the heightening beat that shadows him. Another classic that is present in this song is the high-keyed, autotuned voices that accompany his own. While this isn’t a completely original idea, it is very Bellion. The sentimental tune still keeps with the upbeat feel he has and is still a song that can be blasted over the radio.

The next track can be described as nothing less than funky. While most typical songs have a beat that listeners can clap to, this is not one of those, and I’m not really sure what’s going on here. It seems very techno and just about everything else. I was hesitant on my feelings about this song when I first heard it, but my worries were quickly put to ease after the pre-chorus broke, and I heard the upbeat tunes of “JT,” which stands for John Travolta. The songs appear to capture what Bellion’s journey to fame encompassed and what he hopes to gain from life later on. Overall, it’s simply a happy tune that is perfect for max-volume car rides.

All of Bellion’s music–not just on this album– seems to contain, on some level or another, a dissection of what the true meaning of life is to him. While also mentioning his faith in about every track, he also never fails to hold the same positive outlook on life, which is often refreshing. Even songs such as “Stupid Deep,” a more melancholy song about Bellion questioning what if everything he was looking for he already holds in his hands, has the same take on life. To elevate the song above what your typical sad song sounds like, he put his signature twist on it by adding unusual instrumentals to the melody.

I think one of my favorite songs on the album would have to be “Blu.” Not only do the words fit like designer pants to the song, but they in themselves are poetry. The thing I like most about it is the world tour of tunes it takes you on, from rising and falling, and all-time lows and Mount Everest peaks, it really has everything. With the way he remixes people’s voices, the sounds spin like records through your speakers and bounce back and forth through your headphones like tennis balls on a court.

Finally, the track that stands out from the others solely for its difference in comparison is “Adult Swim,” which features Tuamie. It opens to a news reporter telling the news of Tuamie developing a time chamber, but it only gets more unique from there. Tuamie follows this report up by rapping about how the industry and fame are all facades, only to have the track switch up completely and add in background harmonizers. As if it couldn’t get any more complicated, there is also a “narrator voice” in the background describing Tuamieś actions. The song only progresses onto more levels from there.

Overall, Bellion’s album holds his same traditional mayhem but is nothing less than unique. With the clever mid-track switches and angelic voices that accompany his, Glory Sound Prep is certainly an experience, to put it lightly. If you’re looking to be taken on a cruise to all the different approaches to music, this is the album for you. There is definitely a new song for everyone on this album.