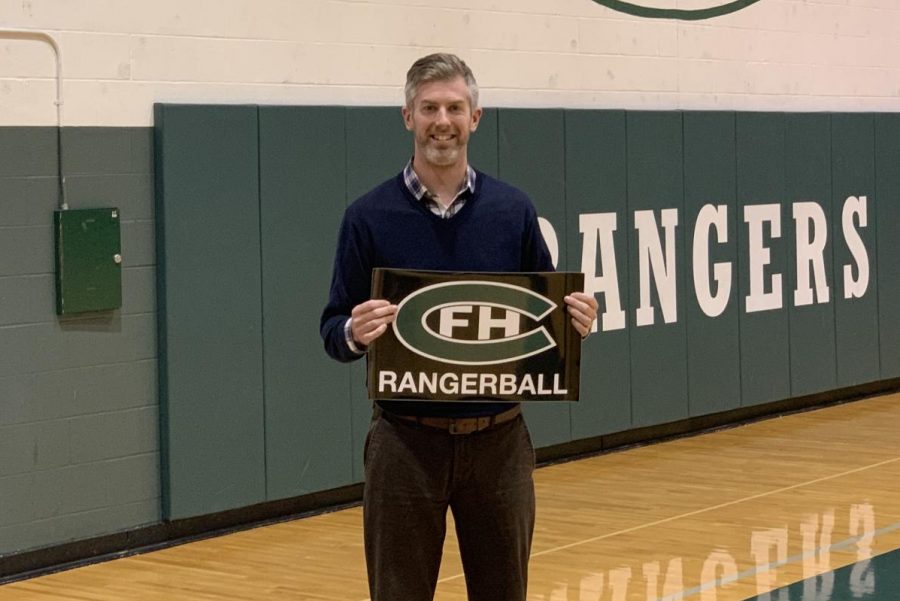 When the basketball season kicks off Friday night at East Kentwood, Rangerball fans will see a familiar face calling plays from the sidelines. Former FHC player and now head varsity coach Kyle Carhart will be taking over the Rangerball coaching and traditions.

“It is certainly a unique situation and one that I never really anticipated happening,” Carhart said. “I am excited to carry on the tradition that Coach George has built over 24 years.”

After the announcement of former head coach Ken George’s retirement from coaching at the conclusion of last season, FHC had some big shoes to fill before the upcoming year.

“The process started with some conversations with administrators and staff here at FHC,” Carhart said. “When Coach George put in his resignation, he contacted me about the possibility of applying for the position.”

Carhart is no stranger to basketball or coaching. While formerly living in Finland, he coached U15 and U17 teams. Upon moving back to Michigan, he completed his teaching degree which earned him a job as both a teacher and varsity coach for Lowell. During his time with the Red Arrows, he even had some competitive games against his alma mater and former coach.

Leaving Lowell after five years was challenging for Carhart after establishing his coaching philosophies there. But making the adjustment to green and white as both a coach and a teacher was a relatively smooth change.

“It was extremely difficult to leave Lowell,” Carhart said. “I had formed great relationships with the staff and students [there]. But the help of the great staff here at FHC, in particular Mrs. O’Brien, Mrs. Chadderdon, Mr. Anderson, and Mr. Briggs in addition to the rest of the social studies department, has made this transition easier.”

Luckily for Carhart, FHC wasn’t a completely new place for him. Moving back meant returning to his childhood roots.

“It has been a long time from when I was a part of the team here at FHC,” Carhart said, “but a lot of the same identities that make this school unique are in place.”

After having time to get comfortable here at FHC with the fall season, Carhart now looks ahead to the winter and basketball season with his new team.

“Looking ahead at the season, it is easy to see that having success is going to be a challenge, as it is every year,” Carhart said. “The players will have a lot of responsibility to ensure that they get the very best out of one another on a daily basis.”

One player that will be taking on plenty of responsibility on the team this year is senior Daniel Deindorfer. Daniel has played on the varsity team for all four years and was adapted to George’s coaching style.

“I met Carhart last summer,” Daniel said. “He’s a really nice guy and you can tell he really cares about the players. He really wants to continue the tradition Coach George built with Rangerball.”

Working with a new coach would take adjusting, but for Daniel, he doesn’t feel much of a change in coaching style.

“He’s kind of like Coach George,” Daniel said. “I think it’s because he was a player for him years ago. We as a team definitely still get that sense of urgency but also a sense of passion and drive [from him] and we need to match that.”

Even with a new coach, Daniel still has a very solid outlook on the season as a whole and the successes this team could have.

“I think we’ll do pretty well,” Daniel said. “I know we had a bit of trouble in the first game of playoffs last year, but I think we can get beyond that. I myself have never won a district game, but I think this is the year to do it.”

Daniel’s first three years of basketball on the varsity team were played under Coach George, who also has high hopes for Carhart taking over the team.

“It’s so comforting to have Kyle in charge,” said George, who still teaches English at FHC. “He is a former player and he was an already successful varsity coach. He will do an outstanding job.”

To George and now to Carhart, Rangerball means more than just a program. Rangerball is a tradition that both of these coaches understand.

“It was important to me that whoever took it over understood how important athletics are here at FHC and to the community,” George said. “Kyle gets that. He will be a very successful coach and I think he comes from all the right places to take over.”

Some of the confidence in Carhart’s coaching ability comes from competing against George in the past when FHC took on Lowell.

“He’s a very difficult coach to prepare to play against,” George said. “His teams competed hard and had excellent game plans. I hope he’s a long-term guy. I look forward to him continuing the tradition that Rangerball has in our community.”

Overall, Carhart has been a welcome change to FHC, both as a teacher and a coach, as he finds a new opportunity to do what he loves.

“These are great and committed students, staff, and administrators,” Carhart said. “Couple that with a supportive community, and it makes for an exciting opportunity to teach and coach at FHC.”