Furyborn was a ferociously good read 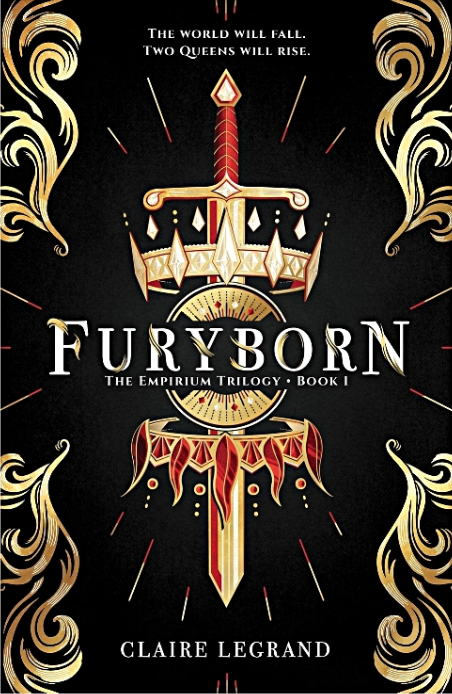 My eyelids drooped. My vision was blurry. My exhaustion had set in. But with Furyborn, I just had to read one more chapter. And then maybe one more. And the one after that.

Before cracking open Furyborn, I had no idea what to expect. I had never read anything by Claire Legrand before, nor had I ever heard the name. But, wow, Legrand can write. She stayed away from the cliches of fantasy writing that make other books feel immature and aimed at a younger audience. She knew the age group that would most likely snatch her book from the shelves– teens and young adults– and wrote with the corresponding level of sophistication.

In order to explain the plot in the most concise manner, you have to imagine a timeline. This timeline is flush with dates of world-changing events and massive gaps. On one end, there is one story, one perspective, one life. On the opposite end, there is another story, another perspective, another life. Since these two stories lie on the same timeline, they are related and pertinent to one another. Yet, the hulking middle section remains a mystery.

The first story follows a well-born young woman named Rielle. To most of society, including the crown prince and her fiance, her lifelong best friends, Rielle is just a normal girl. But, she has secrets, guilt-ridden and powerful secrets; Rielle can harness every power of the empirium, a magical entity that strings the world together. When some of these secrets are brought into the light, Rielle is put through a number of challenges by the royals to prove that she is the prophesied Sun Queen, who is to save the world, and not the Blood Queen, who is to doom the world. The threat: evil and cunning angels.

The second story follows another young woman, Elaina. Trained in the art of deception and murder by her mother, Elaina supports her poor family by hunting down men who the Undying Empire, the cruel ruling government, wishes killed. However, alliances can change. When her mother is kidnapped, Elaina will do anything to find her and protect her brother Remy, including allying with a major player in the rebel underworld, Simon.

Between these two stories, the timeline is as murky as a muddled stream. It is quite confusing in the beginning to have these two plots with no apparent correlation. As the book progresses, part of the hazy story clears up. The information gleaned gives the reader just enough clarity to start to piece the puzzle together so that they feel compelled to complete it.

One of the ‘pieces of the puzzle’ drove me absolutely crazy. In the first chapters, the reader learns the ending of the first plot: Rielle has a baby, and the vile angle Corien takes over the world. As this part of the story is told from the perspective of a young child, many things were left untold. Why did this happen? How did this happen? What could Corien want with Rielle? Question after question zoomed through my head as I tried to force my theories into the shape of puzzle pieces.

Another aspect of this linear plot is the many things happening all at once. If you looked at any historical timeline, dates of economic, political, and social events would be noted as they all occurred because of one another. This book has the same idea; these parts work in twisting tandem to tell the tantalizing tale.

The proponent of Furyborn I liked most was the skillful, and no doubt carefully planned, juggling of the two plots. When one slowed down, the other picked up the slack and became addictingly captivating. If I got bored with one chapter, I knew the next would be much more interesting because it would be from the other plot.

Furthermore, I found the second plot much more intriguing than the first. I wasn’t really a fan of Rielle, which is a really peculiar thing to experience. In so few good books can I say that I disliked a protagonist. Yes, I pitied her, rooted for her, and connected with her. Despite this, there is something about Rielle–perhaps her ignorance or dependence on others– that makes me want to kick her.

Conversely, I loved Elaina. She is a well-rounded character, and her character development was exquisite, completely exquisite. In the beginning, Elaina seems to be this stone-cold, regret-less human hunter. As the book progresses, the reader sees the true Elaina, the Elaina who put her family first and now feels the emotional consequences herself.

Moreover, throughout the progression of the story, Elaina begins to open up. Before, she was very closed off and pushed the majority of people away. Later, she begins to voice some of the emotions threatening to drown her. Elaina spills these emotions to new friends who refuse to let her push them away.

One of these people is Simon. Ever since their first meeting, even though many punches were thrown, things were flirty between them. I absolutely loved it. It was the whole “I hate you, but maybe I actually really like you” sort of deal. It was done in such an original way that it wasn’t like other mundane and banal relationships of this type.

I waited and waited for something real to finally happen to them. While I can’t say whether something did or did not happen between them as to not spoil their romance story, I can say things were left with a promise of these two becoming something more.

With its thrilling action scenes and its loaded 512 pages, Furyborn has easily become one of my new favorites. How will I ever wait until next May to get my hands on the second book?