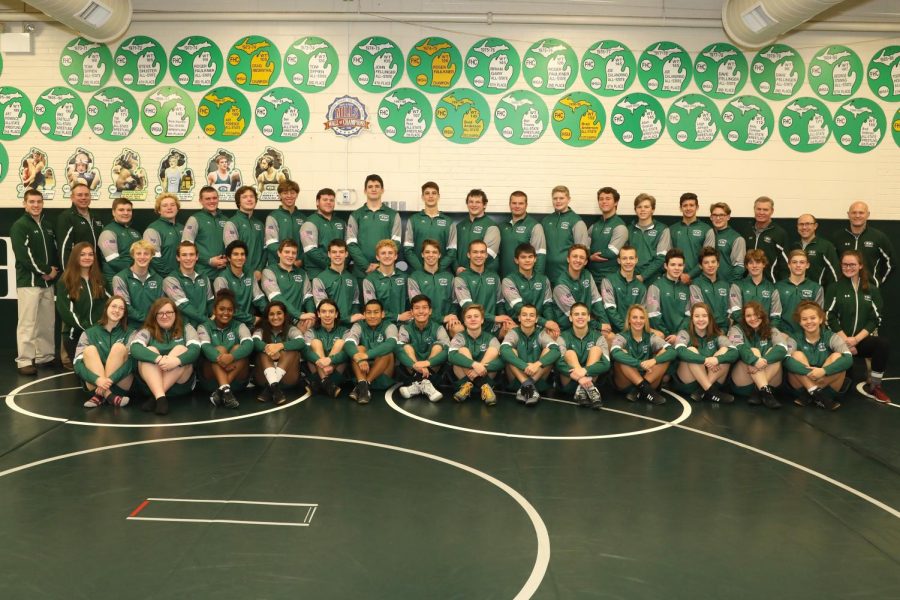 The wrestling team had an overall successful 2017-2018 season with a 14-8 record and an academic all-state team. Two wrestlers reached 100 career wins and took third and fifth in the state. It will be hard to top last year’s season because of the amazing achievements and the loss of great wrestlers. This year, the younger wrestlers will be bred for greatness.

“Last season we had some really big names that have been around the program for a long time,” head coach Brad Anderson said. “Names like Isaac Torrey, Keegan Moore, Seth Udell, Trace Schirmers, and Adam Heneveld; guys that have done wrestling for a long time and had a lot of wins. So, this is kind of a new era for our program.”

The upperclassmen agree that it is a weird feeling having the 2018 seniors not be a part of the team this year. The new feeling of rebuilding and strengthening the program will require the hard work from everyone.

“[This wrestling season] is going to be different than others because a lot of the seniors are gone now,” junior Brandon Weiskopf said. “They led the way, and now it is time for last year’s juniors to step up and lead the group now; it is their time to shine.”

Other wrestlers agree that this is a rebuilding year. There is a lot of potential on the team this year and some stunning young talent.

“We are in a rebuilding year,” junior Cole Kaminski said. “We lost some great seniors last year.”

This year will be led by some great wrestlers. Some leading seniors are John Samsell at 145 pounds, Ben Keaton in heavyweight, and Vaughn Rodriguez at 112 pounds. There are some promising young underclassmen, specifically sophomores, to watch as well: Caden Jacobs as a returning Regional qualifier at 119 pounds, Mason Childers at 125 pounds, and Isaac Gurley at 152 pounds.

With this potential, the team will take on challenging, but not impossible opponents. The biggest competition this year is Grandville, Cedar Springs, and another historically great wrestling program–Lowell— who also lost some major seniors. A huge key to preparation for matches against these threats is training and the invested coaches. With Coach Anderson having motivational sayings and quotes to inspire the team like, “With it, or on it,” or, “Pride, Tradition, Excellence,” it is hard to feel unprepared.

“[We’re gaining] a lot of coaching,” Brandon said. “A lot of coaches help out with us; we have great coaches and great training.”

There is no doubt that the wrestling team has high hopes for the season, but it is how hard they’re working that will take them far. Success this season starts with rebuilding the team and bringing a new band of wrestlers together.

“A long string of brothers has come to an end,” Anderson said. “Now we have a new crop of kids coming up who started in our youth program a long time ago. [I am] really excited about the future and growing this year, hopefully giving our program something to build on.”