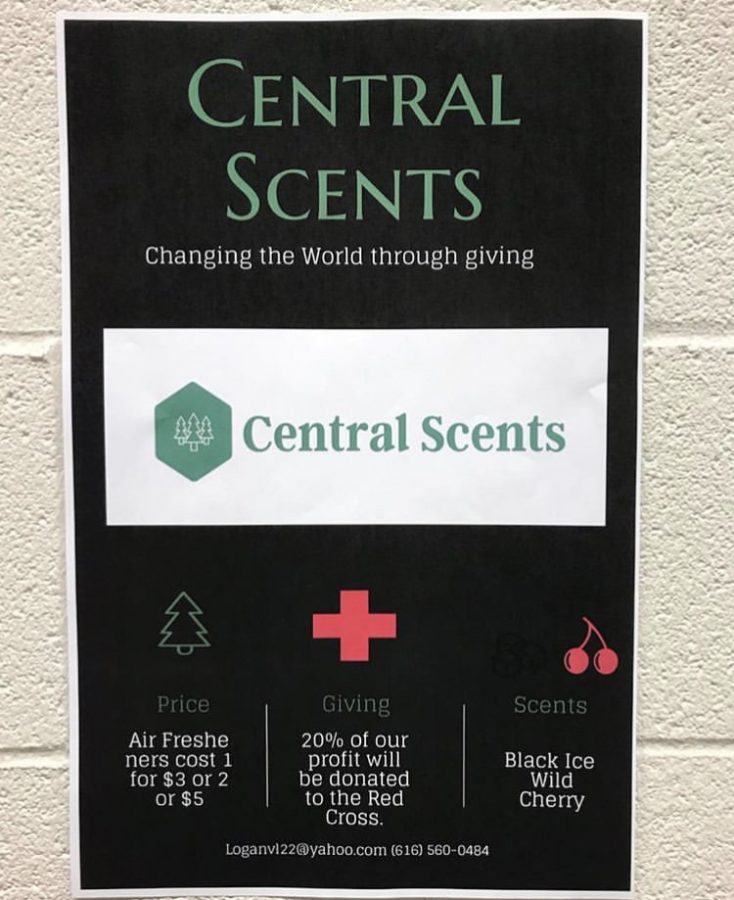 Sophomore Logan VanLente was a freshman in Jared Lowe’s civics class when he started his own business. Hoping for some guidance in undertaking this hefty task, Logan reached out to Lowe. He received not only the help he had been seeking, but a suggestion to take Intro to Business. Taking into consideration Lowe’s suggestion, Logan added Intro to Business to his sophomore schedule. This choice led to the project Logan has been immersed in since the beginning of first semester.

“We were tasked with designing a product for our Intro to Business class,” Logan said. “[My group] got to thinking about what causes were out there and how we could help them.”

Logan’s group also includes senior Mason Leffew, junior Algar Gustafson, sophomore Tyler Brooks, and senior Noah Kingma. Each of them has a designated role in the company, and together they came up with a product idea: air fresheners, cleverly named Central Scents.

“A lot of people just need air fresheners,” Logan said. “If you have little kids [and] after sports they hop in the car, then your car starts to smell.”

Sold at two dollars a piece, the air fresheners come in one of two different scents: black ice and wild cherry. Twenty percent of the total profits will be donated to the Red Cross, and the boys have already sold a little over half of their original inventory, which was somewhere around two hundred. Logan believes that the project will be successful in the end.

“It’s working out so far,” Logan said. “We’re like forty dollars away from breaking even. So after that, everything will be profit.”

However, the current success of the project doesn’t mean the road has been easy. Central Scents has faced a number of obstacles, one of them being the difficult choice to come up with an entirely new business idea.

Originally, the plan was to create headbands with the FHC logo on them. However, they received last-minute news that if they chose to go ahead with that plan, any profits would have to come back to the school.

Logan and his group managed to work past this, and Central Scents came to be. However, it wasn’t the only obstacle on the road to success. How to find a supplier and raise money were a couple of other questions Central Scents were faced with. In the end, the boys decided to each chip in thirty dollars to the business. Their supplier was Kleen Right, a company that provides supplies to car washes.

“As with most business startups, Central Scents has faced many challenges,” Lowe said. “The team continues to work through these challenges and hopes to continue to create buzz about their product in order to increase sales and profitability.”

Although, the biggest challenge is one Logan did not expect. Advertising their product turned out to be a lot harder than the team had originally thought. They ended up having to take time out of class to record commercials and go to classrooms telling students about their product. Their Instagram page, @central_scents, is another source of media outreach.

This project definitely hasn’t been easy, and Logan’s group has put in many long hours to ensure the success of their product. But overall, Logan is very grateful for this experience and the chance to acquire more knowledge in the world of entrepreneurship. He has gained a lot of insight for the future and learned lessons that can be applied to many other areas of life.

“If you fail, just keep trying,” Logan said. “It’ll eventually work out. Don’t be afraid to change your idea. Change is always a good thing.”