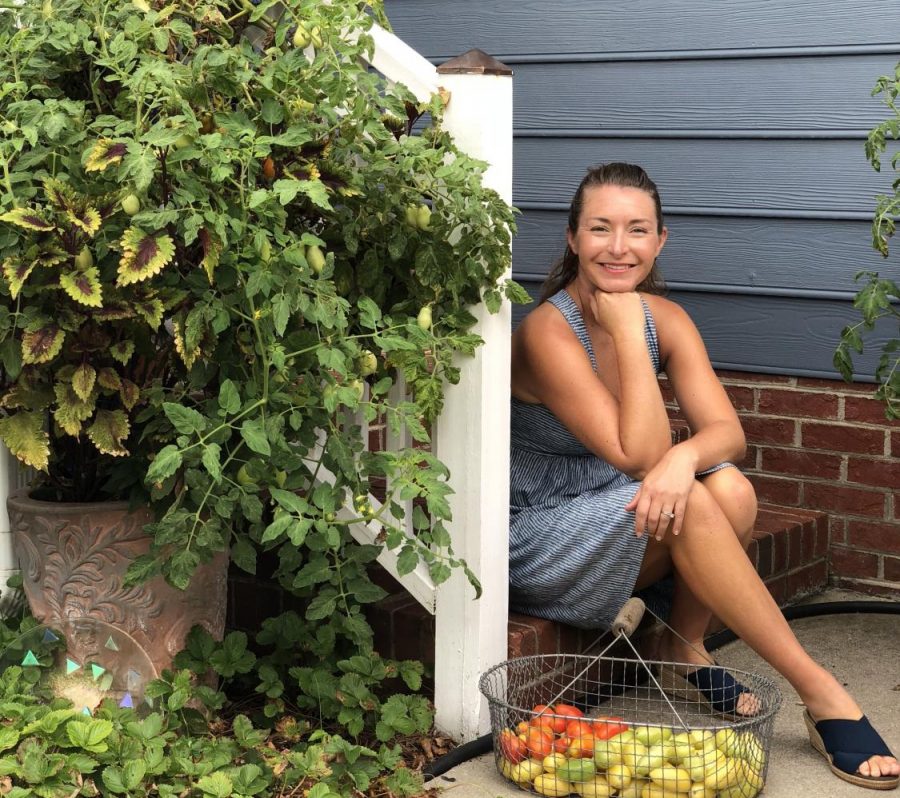 “I fell in love with the concept of using the space that we have for something more practical.”

Powered by her love for plants and food, edible landscaper Brie Arthur has made it her life’s work to produce for her community and to inspire her fellow gardeners with her unorthodox methods. Combining ornamentals with classic garden vegetables, Arthur’s idea is that landscaping can and should be edible, proving to her audiences that it is both cost-efficient and enabling.

This week, we had the opportunity to listen to a podcast featuring Arthur on the Joe Gardener Show, and everything that was discussed I thought was incredibly relevant and revolutionary. Her love story gardening began with her passion for food, eventually evolving into incorporating edible plants into her ornamental landscaping display. Although it requires a certain amount of attention, this “edible landscaping” actually has many benefits, like reducing foodborne illnesses, having control over what you eat/see/grow, saving money, eating healthier, and more. In terms of the U.S. currently, edible landscaping would be especially relevant because it reduces foodborne illnesses like E. coli outbreaks in the lettuce.

A piece of the podcast mentioned by Arthur was the fact that 50% of the produce her neighborhood and her family were eating was from their quarter-acre plot of land. In that sense, her edible landscaping reminded me of the greenhouse and the way that it is feeding many of FHC’s staff.

The podcast was definitely a great look into different ways of gardening with vegetables, and my hope is that in the springtime, we will be able to incorporate some of those principles into the landscaping around the school and around the greenhouse.

This week Mr. Scholten shared a podcast with us that he listened to over break. It was an interview with Brie Arthur, and it was about the concept of foodscaping. This isn’t a podcast I would personally choose, but it was surprisingly interesting and very informational. Foodscaping is the incorporation of edible plants into a traditional landscape. Arthur just came out with a book called The Foodscape Revolution. She has been traveling around the U.S. doing talks about the book and bringing awareness to foodscaping. In the past 20 months, she has done 350 talks. She wants everyone to see how the hobby of foodscaping can make your life better and improve the lives of people around you as well. She says that she strives to give sound, practical gardening advice from one gardener to another.

Arthur became passionate about growing her own food when she became hungry, but she didn’t have the budget to go to the grocery store. She began to fill in the open spaces in her garden and mixed in her vegetables in with the other plants in her yard, but she said that you could barely even tell.

The best way to start foodscaping is to start simple. Site preparation is the most important thing for food scaping, and finding especially sunny places is best for vegetables. Another thing that is important to invest in is your soil. After you do this, you should start creating zones because they are very efficient. Zone one is where the highest maintenance crops go or the ones that have to be harvested the most. Zone three is where the grains and seeded plants go that you just have to harvest at the end of the season. The rest go in zone two.

There are more benefits to foodscaping than just having more room to grow plants. Arthur says that it also reduces the risk of foodborne illnesses and the number of pest problems when there is mixed biodiversity. She finishes the podcast by talking a lot about rice, saying that “rice is the coolest plant on the face of the earth” and that “once you grow something for yourself you will have a greater appreciation for what you eat.”

I absolutely loved listening to the podcast Mr. Scholten recommended to us this week, called  Foodscaping: How to Create an Edible Landscape with Joe Gardener and Brie Arthur. As the guest, Brie talked all about how a few years back, she was dirt poor and needed a cheap source of food. Because of her predicament, she planted vegetables throughout the plants in her flowerbeds.

I had never thought of someone being able to do this before, and after listening to her talk about it more, I think that it should be something everybody should get into. She created an affordable alternative to having to buy imported vegetables from the grocery store every day, and she was able to feed the neighbors around her too. Not only that, but it also made her yard look even better. Everyone around her loved her garden, and people would come by just to take pictures of it. To make it most efficient, she created a plan to make harvesting the easiest.

I love the idea of this because you don’t have to create a specific “garden” or build boxes for your foods, and it is simple and easy to take care of. I’m planning on looking more into this and possibly trying it at home this spring. For anyone who wants to listen to it, you can find it on iTunes and Spotify!

This week we listened to a podcast from The Joe Gardener Show called “How to Create an Edible Landscape,” and their guest on the show was Brie Arthur. Arthur lectures and writes to inspire others to incorporate “foodscaping” into their home landscapes. She defines foodscaping as “the incorporation of edibles in a traditional, ornamental landscape.” She came across this idea because it was something she found interesting and practical.

Arthur has a background in landscaping and horticulture, and using that, she got creative and was able to work around her limited budget. Arthur has proven that growing your own fresh food at home can be very inexpensive. In fact, after planting one 99 cent packet of lettuce seeds, she used what she grew to feed her family salads for six months. Also, after planting a 99 cent packet of rice, she harvested enough to sustain her rice needs for two and a half months.

Some other benefits to foodscaping are that it promotes healthy eating. Not only do you feel good when you eat fresh veggies, but you also gain a greater appreciation for the food you’re consuming because you are exposed to the beauty of its growth. It also reduces the risk of foodborne illnesses because your food isn’t being shipped from far away or handled by many different people. You know what’s going into your food, so you know exactly what you are consuming.

Another benefit to foodscaping is that it makes tending your landscape more fun. A greater biodiversity in your landscape reduces the growth of weeds, and it improves your soil due to the recycling of organic matter. Although we may not be able to grow all the food we consume, we can still use our living spaces to our advantage and reap the many benefits to building our own healthy foodscapes.

In addition to our watering and greenhouse activities this week, we had the opportunity to listen to a podcast called The Joe Gardener Show. The episode we listened to was entitled “Foodscaping: How to Create an Edible Landscape,” featuring special guest and author, Brie Arthur. Arthur’s goal is to inspire the world to fall in love with food and gardening, as well as to think about landscaping in different ways. In her book, “The Foodscape Revolution: Finding a Better Way to Make Space for Food and Beauty in Your Garden,” she provides practical advice from one gardener to another, regarding different aspects of planting and ways to garden and organize edible landscapes. Arthur defines the book’s main topic (foodscaping) as the incorporation of edibles in a traditional ornamental landscape. She describes being drawn to foodscaping simply because she was “hungry.” She did not have a large budget, but she had a background in gardening to rely on. Despite living under strict homeowners association rules, she was able to creatively grow vegetables among the other ornamental plants in an aesthetically pleasing way and obtain food from her own yard.

Arthur explains that if every 4th house in her neighborhood was planted and managed as hers was, it would change everyone’s lives in a positive way. She wants everyone to see this impact and feels it is important for her to share her experience in edible landscaping. To convince the listeners of the impact foodscaping has, she encourages everyone to think about how far our food travels before it reaches the grocery store. Statistics say that it can be anywhere between 15 and 25 hundred miles. This travel creates an extremely large carbon footprint which could be reduced by growing food in our own backyards. Arthur also described the significance of appreciating what farmers do. As individuals, we will never be able to grow everything we eat, but once we realize the effect our consumption has, we will see the value of growing food, as well as the value of farmers and all they provide.

As beneficial as it is, the idea of foodscaping does come with challenges. In the podcast, Arthur addressed some challenges and how to handle difficult situations such as lack of awareness of foodscaping, mammal browse, and pest control. She states that the main reason we don’t see very much foodscaping currently in practice is because people haven’t really thought of it. Arthur has given 350 talks about foodscaping in just 20 months, raising awareness about this idea. For issues dealing with browsing mammals, she explains that there are many crops, such as potatoes, onions, arugula, and garlic, that we humans love, but animals dislike. These crops can be used to create a natural barrier around the garden. She proceeds to refute claims about pests by saying that edible landscapes allow for higher biodiversity, which will repel pest species and increase the number of beneficial insects. 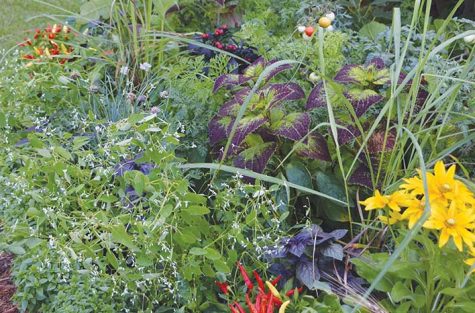 To get started with this plan, it is easiest to look at your landscape in three different zones. Crops that need most water and are harvested the earliest should be planted in zone one, closest to the house, whereas crops that need minimal water or have late harvest times should be planted closer to the edge ofthe property. Arthur states that every average home lot is equivalent to the amount of space needed to raise 48 beds.

Overall, I found the idea of foodscaping new and intriguing. I never considered growing vegetables in my yard aside from the set-aside garden area. As a greenhouse independent study student, I wonder how we could integrate edible landscaping into our school.