Sammy Postlewait’s love for soccer and wrestling encompasses his life 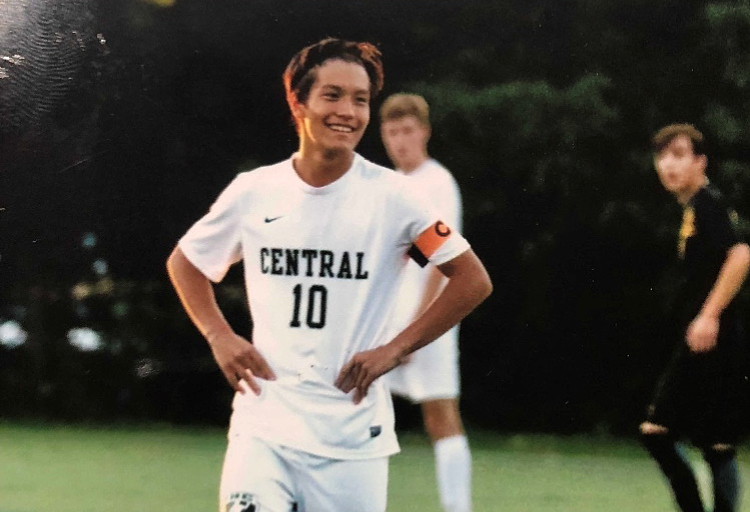 Through junior Sammy Postlewait’s dedication to soccer and his newfound admiration towards wrestling, his undeniable love for sports can be easily discerned. Although he has devotion and an appreciation for both sports, soccer has had a greater influence on his life throughout the years.

Sammy’s love for soccer has been an incentive for his continuing participation in the sport. He dedicates a substantial amount of time throughout the year for it, whether it be with the school in the fall or throughout the rest of the year with Midwest United FC.

While playing, Sammy is drawn to the team aspect of the sport, and it’s one of the reasons why his love for soccer has transcended with age.

“I think I fell in love with it because it’s a team sport, and it’s not as individualized,” Sammy said. “You have to work as a team to be successful, and [my favorite part of soccer] is probably just being with all of my friends that I wouldn’t get to see every single day.”

This knowledge of the importance of teamwork has helped him in his position as a captain on the school’s varsity soccer team. Sammy said that he enjoyed being one of the three captains that led the team in the last season. All three captains are close friends, which made the experience go well for him.

As one of the captains, Sammy has learned the responsibility needed to motivate and lead his team.

“I learned that there are some kids that need to be pushed a little bit,” Sammy said. “There are [times] when kids will be slacking off, and I would have to push them hard for them to play up to their ability because I know that everyone on the team is a good player.”

Along with playing soccer, Sammy is also a part of the wrestling team. Unlike soccer, he hasn’t been wrestling for very long, but, like soccer, Sammy was introduced to wrestling by his family. Although his two older brothers and dad both wrestled, wrestling coach Brad Anderson was the one who pushed Sammy to join the team during his sophomore year.

Sammy allots numerous hours a week to wrestling practices and matches, ultimately making him notably busy with wrestling, soccer, and school. Regardless of its time consumption, he has enjoyed his experience on the wrestling team, and the people who are a part of the team make it even better.

“I’ve made some very good friends from wrestling,” Sammy said. “In the wrestling room, everyone is pretty much equal; even though some people [are better at wrestling than others], we all stick together and treat each other like brothers.”

During his sophomore year, Sammy learned how wrestling differed from soccer. It took more mental and physical strength, but he accomplished an understanding of the endurance needed to get through a difficult match.

“If you want to have a six-minute match, you have to really have mental strength to go through it,” Sammy said. “You’re the only one on the mat, so you have to do everything, but I learned that when you think that you’re super tired, you always have a little bit left in your tank to get through the rest of it.”

Sammy has had a few matches in the past where the person he was going against was more experienced in the sport and was claimed as more advanced. However, according to Sammy, when he overcomes and wins when he thought he wouldn’t, it is an amazing feeling.

“There’s no better feeling than wrestling a six-minute match and winning it,” Sammy said. “You just feel so good after. You’re really tired, but it gives you self-pride; it feels amazing.”

Now, soccer and wrestling are both significant parts of Sammy’s life as a high school student, and he values both sports. But when considering looking in the future, he wants to continue playing soccer past high school and into college, if he can.

“I’ve been playing soccer my whole life, and I’ve been training for it my whole life,” Sammy said. “I realized that the further I go on along with it, I can end up going somewhere with it, hopefully, and kind of make a life out of it.”

He fell in love with soccer from the beginning, and this feeling hasn’t faded.

“I definitely want to go as long as I can playing soccer,” Sammy said. “Since I started young, I fell in love with the sport, and I just don’t want to give it up. I’d say it’s probably one of the biggest [parts of my life].”