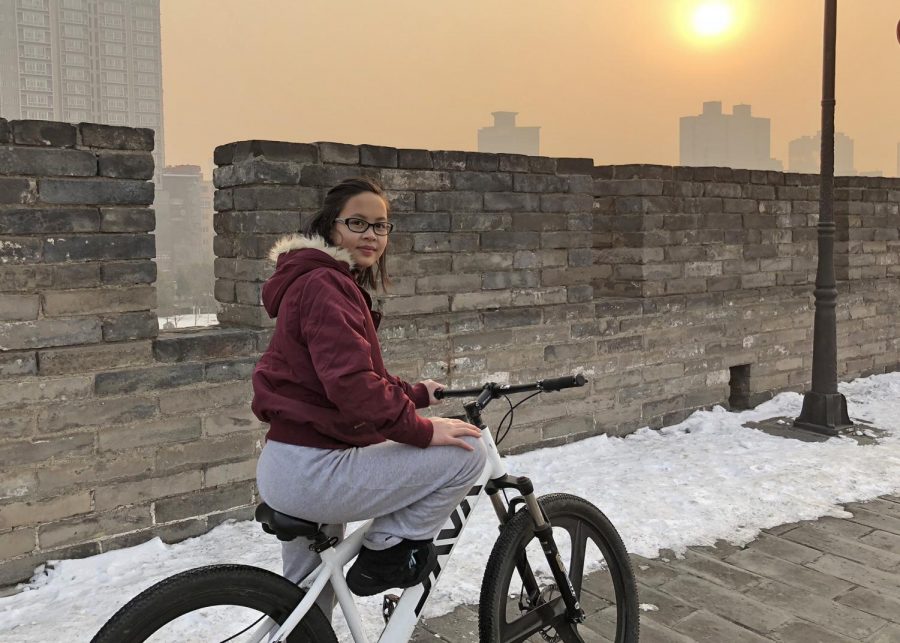 A decrepit staircase leads closer and closer to the burning sun. A stone doorway is one of many in the narrow maze. Bullet holes decorate the walls with memories of the past. Lush land plunges to form a deep valley.

This is The Great Wall of China that sophomore Savannah Elenbaas had the privilege of seeing on her trip to China this past January.

With her mom, dad, and younger sister as her traveling companions, she visited six different cities in two weeks. The active trip took four years for her parents to plan. Waiting that long made Savannah a bit skeptical.

“It was too good to be true at first when they were planning it out,” Savannah said. “I thought it was all a joke like, ‘Wait we can’t really be going.’ ”

Once in China, it was a little different than she thought it would be.

They had a tour every day and were constantly moving from place to place. Getting up early in the morning on top of being 13 hours ahead of normal time took a toll on her.

“Before we went on the trip I thought it was gonna be all hearts and daisies,” Savannah said. “Everything was gonna be great, but we were jet-lagged most of the time. It was nuts. I was trying to stay awake.”

Both Savannah and her sister were born in China, which is one of the reasons why the long plane ride to China took place. While there, she noticed a similarity between herself and the people around her.

“The one thing I realized or saw since I came from there, this is a silly thing but, everyone was my height,” Savannah said. “Everyone here is taller.”

Although she was born there, she doesn’t speak very much Chinese at all. This proved to be a difficult part of the trip, especially when only one member of her family spoke a good amount.

After the guides left them for the night, finding food proved to be a challenge. Savannah and her dad would wander about trying to find a restaurant.

“All we had was each other and Google translate,” Savannah said. “We would just go into these restaurants and hoped somebody spoke a little English.”

She was even more disoriented when it came to the shouting street vendors. The streets were lined with stands of things for sale. People were yelling for attention hoping someone would buy their items.

“It’s almost like manners [aren’t] a thing when you’re doing that,” Savannah said. “People come straight up to you holding stuff they’re selling and shoving it in your face. You’re kind of like ‘I don’t want to buy that.’ It was kind of intimidating.”

Despite the craziness of being on the other side of the world, Savannah was able to admire the incredible pieces that make up China.

Her favorite part was seeing the history and culture expressed through their intricate architecture.

“It was really cool seeing their culture, how [it] was back then, [what] it was like [during] ancient times, and [the] structure of how they did things,” Savannah said.

She felt different after seeing her birthplace and arriving back in the U.S.; Savannah loved being able to learn more about her roots and experience China’s culture.

“I kind of felt connected there because I was born there,” Savannah said. “I was only there for a year, but just seeing everything that [I] grew up in was really different.”