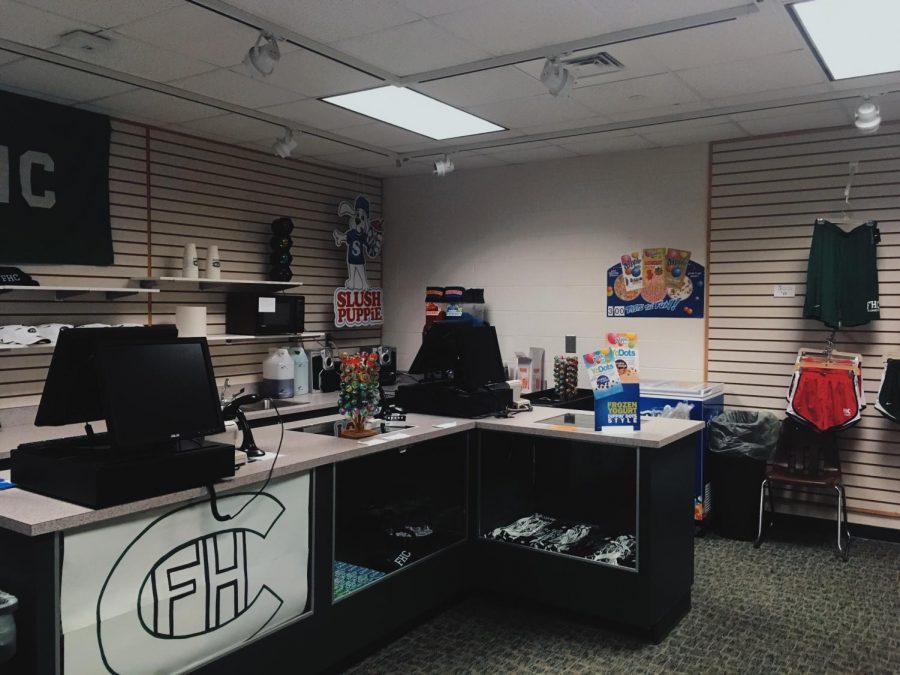 Many students find themselves stopping by the school store during lunch to grab apparel, a slushie, or Dippin’ Dots. But what they don’t know about the school store is all of the in-depth learning and hands-on application of real-life skills that go on behind the scenes.

Marketing and finance teacher Kristin O’Brien has been managing the school store for four years through the class Advanced Marketing. When asked about the inspiration to start the school store, O’Brien explained that the motivation came from what students were learning in classes Marketing 1 and Marketing 2.

“I think a lot of [the inspiration] was learning about different marketing aspects in [Marketing 1 and 2], and they wanted to have something that was a real-life scenario: a business where the kids could actually apply what they’ve learned in the class,” O’Brien said. “I think it’s one of those things that a lot of schools have, so we just kind of followed.”

When it comes to skills, though, students aren’t just learning about the “on paper” aspects of marketing.

“It gives [students] a fun opportunity to apply what they’ve learned, but also to see what kinds of students come in on a daily basis and the behind-the-scenes workings, like what you pick to have in your store and the designs,” O’Brien said. “We’d love to have more new stuff on a regular basis, but our budget really doesn’t allow it.”

The budget for the school store comes from profits already made. O’Brien says that the store can only order products when they have enough money in their account, which allows students to have a fun, hands-on experience without any of the repercussions if business is slow. Since the cost of the products is already covered, even if their merchandise doesn’t exceed the original selling price, they aren’t at risk of being in debt.

When deciding which products to buy, the “circle of money” approach comes into play as well.

“We have a list of things that we want to get during the year,” O’Brien said. “We prioritize what things we are going to get first, and after we make some money off of selling those things, then we go back and look at buying new things to sell.”

The productivity of the store depends on the time of day and the lunch period, O’Brien says, because some lunches are slower than others. The store could get traffic of only 100 students on one day and then have 200-400 students enter on another. New products, popular attractions, and creative advertising can also affect these numbers.

“We just got Dippin’ Dots, so we’ve seen a spike in traffic coming in,” O’Brien said. “When we got the slushie machine, that really motivated people to come in on a daily basis. We also got new hats, visors, and fanny packs fairly recently. We haven’t done a lot of promotion for those, but when we do, we’ll have more traffic.”

Although the store seems to be doing well, there is one question that remains. Would it be more successful in another location? O’Brien revealed that in the past there have been talks with the administration about switching things up. Moving to the fishbowl for a more “cafe feel” and expanding the hours to before and after school was discussed; however, these ideas were never made into plans.

Complications, such as Michelle Obama’s “Healthy, Hunger-Free Kids Act,” put health standards and regulations on what schools can serve and sell. This “Smart Snacks” law prevents the school store from selling items such as pop and candy, which O’Brien believes would boost sales.

The difficulty with this solution, however, is finding students who are willing to work these nontraditional hours. O’Brien believes that this year, though, she has a group of students who may see the value in this task.

“We’re trying to get creative so we can drive more traffic in,” O’Brien said. “I do have more kids that are receptive to doing that because they see the value in how many more customers we can get.”

One of O’Brien’s current Advanced Marketing Students, senior Katie Johnson, likes her job as the schedule manager and thinks that the tools and skills she is learning in the class will certainly help her in her life after high school.

“I like running the school store because we get to meet people who I’ve never seen before,” Katie said. “I think that if I ever go into anything at a store or in business, this will help because I’ll have the experience of working a cash register.”

Katie also agrees with the idea that the healthy food laws are holding the store back and not allowing it to reach its full potential.

“[The store] has been successful, but it’s also hard because we can’t sell anything that’s very unhealthy,” Katie said. “So if we were able to sell more candy, we would get more customers.”

Senior Ethan Vredenburg, an employee of the school store, is also taking away important life skills from his experiences.

“I’m learning a lot about how a store runs,” Ethan said. “It’s actually pretty cool to see how everything works behind the curtain. Delegating different tasks to different people and things like that is what I will take away from this when I graduate.”

While the store is doing well, O’Brien and the students who make up Advanced Marketing are working on special promotional ideas for December. Attractions such as “The 12 Days of Christmas” and a hot chocolate bar are only some of the ideas on the table.

They are also making an effort to make the store more welcoming to nervous underclassmen or people who have never ventured into the school store before. Consolidating working schedules so that only four to five people are in the store at a time is only one of O’Brien’s methods to make things more inviting.

“This year we’re trying to have the lights a little bit higher and hopefully not be as intimidating,” O’Brien said. “Last year’s group was one big group of friends. This year, it’s a more diverse group. They all get along really well, and they’re all really responsible. This year, I feel that they’re better, and they’re more responsive to things that I say to them.”

Ethan also has thoughts on the subject and advises people to not be nervous.

“We seem like we’re big tough seniors, but we’re all a loving group of people. We love when people come in and buy products from us,” Ethan said.

Overall, O’Brien describes the students working in the school store in the most positive ways possible. According to her, students that are outgoing, creative, and passionate are only the start to the many others who make up the school store.