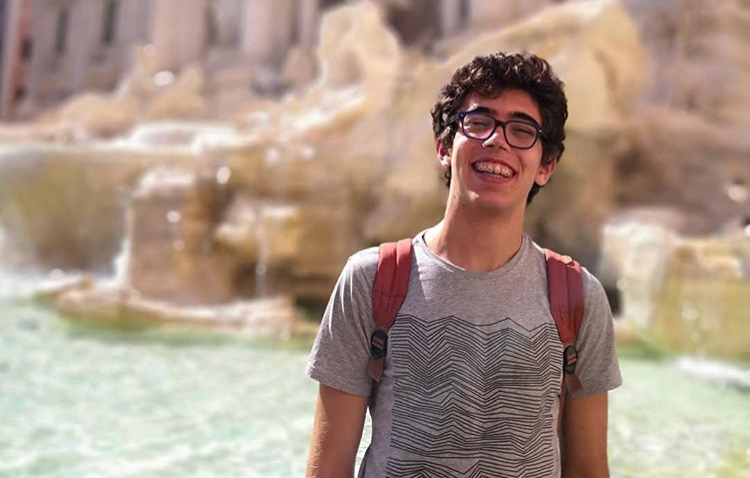 Senior Francesco Licci’s roots to FHC only go as far back as August. Arriving here at FHC through a foreign exchange program, Francesco’s experience here thus far has been a whirlwind of new culture and perspective.

And learning about a whole new culture began right on his first night– through America’s signature serving sizes.

“Everything here is so big,” Francesco said. “I arrived at night, and with a volunteer, we went to Arby’s. I ordered a medium size, but the medium size here is like an XL in Italy. I tried to finish it.”

Francesco’s Arby’s trip was the first of many culture shocks as he adjusted to suburban America after a lifetime of living in Italy. In fact, Grand Rapids is his first intercontinental venture. Thus, the vastly different culture has been all the more jarring.

Besides the pride and joy of the United States- the fast food industry- Francesco’s first impression of his new surroundings was characterized by a contradiction of preconceived notions and the reality of suburbia.

“I associated the U.S.A. with tall buildings like [in] New York or big cities,” Francesco said. “So when I came here, it was a little strange.”

Regardless of his surprise at the lack of soaring skyscrapers and bustling traffic, he appreciates Grand Rapids for its comfort and community.

“[Grand Rapids] is good,” Francesco said. “I like it. I think it’s better because I went to Chicago, and I was feeling like I was too small for the city. A little city for an exchange student is better because you can know more people.”

According to Francesco, Grand Rapids has been good to Francesco in his endeavors. He attests to how welcoming everyone has been– beginning with the host family he was placed with, the Kostbades.

“I am really liking my [host] family,” Francesco said. “My family’s the best family I could ever have.”

Beyond the doors of his temporary home for the year, FHC has embraced Francesco with kindness and enthusiasm– most notably, the members of FHC’s varsity soccer team.

In an effort to truly engage with the FHC community, Francesco decided to join the soccer team with no prior experience playing on a team.

“It was my first year of soccer,” Francesco said. “I played soccer but never on a team– only with my friends. In Italy, we play soccer at school every day. I’d never played on a team.”

Yet, despite little background in the sport, Francesco made varsity and excelled as an athlete on the team. All in all, the season proved to be an enriching experience and was the easiest way for Francesco to meet people and make friends.

“It was strange because I didn’t know how the practice would be like,” Francesco said. “I’d never done that. I didn’t know anybody. But they were welcoming, and the coach was very welcoming. I really liked it.”

Francesco wishes to continue the trend of engrossing himself in FHC and thus has plans to join Science Olympiad for the winter, as he has always loved the sciences. Though science is his favorite, Francesco has always excelled academically and consequently took an impressive course load to reflect that. His schedule bears a whopping four APs:  Chemistry, Physics, Calculus, and Computer Science.

Four of the hardest APs prove to be difficult for those taking it in their first language, let alone in a second language like in Francesco’s case. Yet, he refers to his course load and added language barrier with nonchalance.

“At the beginning, [it was difficult],” Francesco said, “but now I’m able to do it. [I can] understand everything.”

Francesco wanted to participate in the foreign exchange program in part to improve his English. While he has been studying English since he was six, nothing compares to immersion.

“In Italy, we study English [through] more writing and grammar,” Francesco said. “So when you have to speak, you are not able to. I know all the rules of English, but when I have to speak, I forget everything and make a lot of mistakes.”

So, as he’s been learning about the elements, motion, derivatives, and programming, he’s simultaneously been improving his English. As such, Francesco has observed significant growth in his English, though colloquial language still presents a bit of a struggle.

“The English here is not like the English you study in the books,” Francesco said. “There are different accents that I really don’t understand very much like different phrases that are typical of this place.”

Nevertheless, through the strenuous classes and language barrier, Francesco has enjoyed school at FHC, not only because of the students but teachers as well.

“I really like the school here much better,” Francesco said. “In Italy, the relationships with teachers are not like this. Here, most students joke with teachers. In Italy, when a teacher comes in, you have to stand up, you have to say ‘Hi’ or ‘Good morning,’ and then you can [sit down].”

Beyond classroom learning, however, Francesco has gained much more during his time at FHC. The foreign exchange program has forced him to experience and understand an entirely new culture, and that has proven to be an eye-opening and engaging journey.

Though Francesco has already gained so much, he still has the rest of the year to finish out before returning to Italy. For now, his focus is on seizing as much opportunity as possible from the remainder of the school year.

“I hope to meet new people and do different experiences that in Italy I couldn’t do like be more participatory in school activities,” Francesco said. “So I’m trying to join as much as possible.”