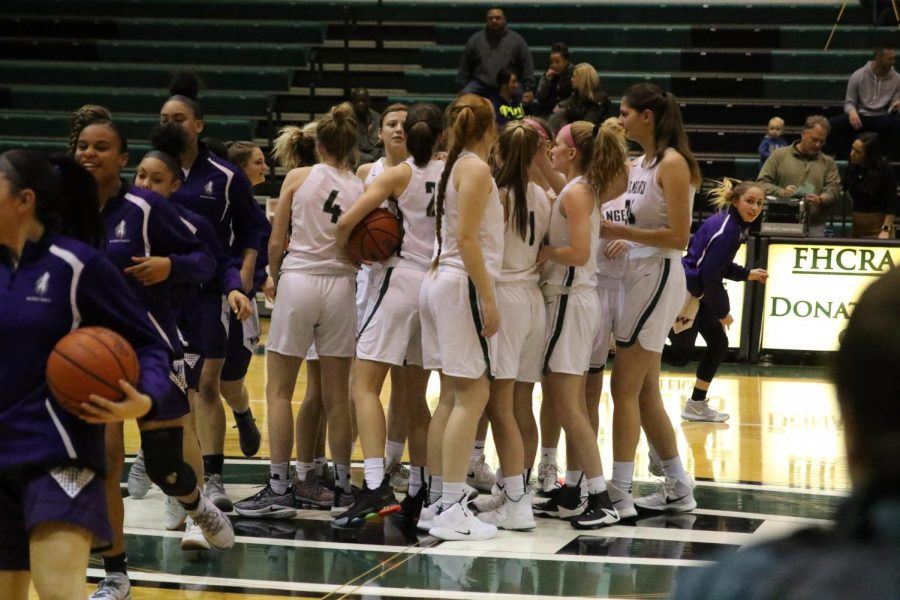 Senior Claire Baguley’s 17-point night led the Lady Rangers to their first win of the season against Wyoming 52-35.

“Claire is such a great leader,” said freshman Theryn Hallock about the sole captain this year. “She works her butt off, pushes all of us, and makes us work harder and we all look up to her.”

Claire returns as the leading scorer from last season but last night was complemented by new faces and hot hands in Theryn and freshman Remmie Ingraham with 13 and 7 points, respectively.

This matchup with the Wolves started extremely fast-paced with the first points coming from Theryn down low within seconds of the tip off.

“I was a little bit nervous [with] this being my first high school game,” Theryn said. “[Making that first basket] boosted my confidence up right away. Hearing the crowd and scoring my first basket on varsity just got me pumped up.”

That initial momentum set the tone for the rest of the game, where FHC seemed to dominate. The Lady Rangers never trailed the opponent and held an 8-point lead both after the first and second quarters. The level of teamwork shown during the first half was impressive for the first game of the season, with FHC already playing with mid-season cohesion.

“I feel like our upperclassmen really stepped up and led,” third-year head coach Kristina Prins said, “but honestly it was like our freshmen didn’t even miss a beat, which was really nice.”

The third quarter started out with a three-pointer from Claire on an assist from Theryn, and from there FHC outscored the Wolves 13-5 to lead 38-22 after three. Stellar passing and smart shots from the starters allowed Prins to clear the bench with two minutes remaining and a solid lead. After one more bucket from senior Danielle Balanda, the Lady Rangers came away from game one victorious, 52-35.

First-game jitters were not a factor initially, but seemed to set in about halfway through the first quarter.

“The first four minutes were incredible, it was so fun to watch,” Prins said. “Then we just kind of slowed down. We definitely had some nerves from everyone, from seniors to freshmen, but I feel like they pulled it together.”
FHC had 14 turnovers and shot at about 65% success last night, in addition to not executing the little things. However, some highlights included 13 team steals and 3 blocks – all 3 of which came from Remmie in her lock-down defensive performance. “We definitely need to work on not turning the ball over, pushing it up the floor, and boxing out,” Claire said. “There are a lot of things we can improve on, but I saw a lot of times where things were going really well and that is really motivating for the rest of the season.”

With this win FHC starts out 1-0 and will be back in action Friday night in another non-conference matchup with the Grandville Bulldogs at home. Once the Rangers iron out early-season mistakes, this team will be able to play high-caliber basketball and will be tough to beat.

“It’s way different playing in scrimmages or playing each other in practices than getting out there in the game, especially in front of a little bit of a crowd,” Claire said. “I’m glad we got that first game out of the way, and I’m really excited to see where the season is headed based on tonight.”