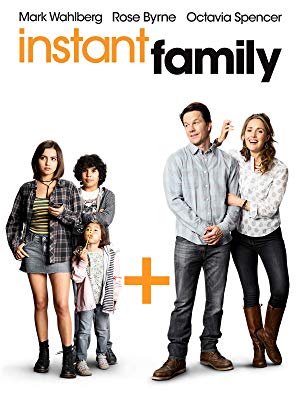 Aimlessly scrolling through Instagram, as I often find myself doing, I came across a short clip from the trailer for a movie called Instant Family. As the clip began to play, I was instantly enthralled by the captivating plot and seemingly likable characters.

So, naturally, a couple weeks after Instant Family was released, I dragged my best friend along to the theatre to see the movie with me. As we took our seats in the small, yet crowded theatre, popcorn and candy in hand, I wasn’t quite sure what to expect.

Instant Family stars Mark Wahlberg and Rose Byrne as Pete and Ellie, a happily married couple in their late thirties who still haven’t had kids. As they notice something missing from their lives, they dive headfirst into the adoption process. As the culmination of all their hard work, Pete and Ellie decide to foster a fifteen-year-old girl named Lizzy (Isabela Moner) after she makes a memorable first impression. However, they find themselves in way over their heads when they discover that Lizzy has two little siblings, Juan (Gustavo Quiroz) and Lita (Julianna Gamiz).

The story is actually based on true events from the life of the writer, Sean Anders. Similarly to the main characters in the movie, he and his wife, Beth, adopted three children in 2012. While it is very loosely based, some of the scenes are actual things that happened to them. One example is a scene in which Pete and Ellie start questioning their decision to potentially adopt the three kids. Anders remembers having a similar conversation with his wife once they realized how difficult having kids was.

Anders hopes that this movie will spread awareness about adoption, specifically of teenagers. Similar to TV shows such as This is Us and The Fosters, Instant Family accurately portrays the bumpy and confusing process of fostering kids and teenagers. However, it also shows how wonderful the end result can be.

Instant Family was equal parts heartwarming and hilarious. I was doubled over laughing one minute and was teary-eyed the next. The writers knew when to perfectly weave a well-delivered joke into a heartwarming scene and when to toss in a scene purely for the sake of getting the audience to laugh.

However, the charm of the scenes wouldn’t have been so prominent had the actors not been as phenomenally talented as they were. Every single actor was flawlessly cast to accurately play the character they were intended to. Wahlberg and Byrne had a chemistry that caused you to forget where you were and be transported into the story. Quiroz and Gamiz, despite their young age, stepped into their roles with significant maturity and talent.

But Moner rose above all of the other actors and actresses and blew my mind with her ability to make me feel the deep emotion in every scene she was in. Lizzy was the typical misunderstood and rebellious teenager, but she shattered the standard for the cliche role and shed light on the truth of her discouraging situation. Whether Moner was portraying Lizzy’s sarcastic and distrusting side or the side of her that was vulnerable and scared, she communicated it perfectly, causing her character to be a fan favorite.

Watching Instant Family turned out to be an excellent use of a rainy Saturday afternoon. I walked out of the movie theatre feeling altogether happier and less stressed than I had when I entered. I plan to rewatch the movie numerous times at the nearest opportunity, and in the meantime, I will eagerly hope for a sequel to this expertly crafted and heartwarming movie.