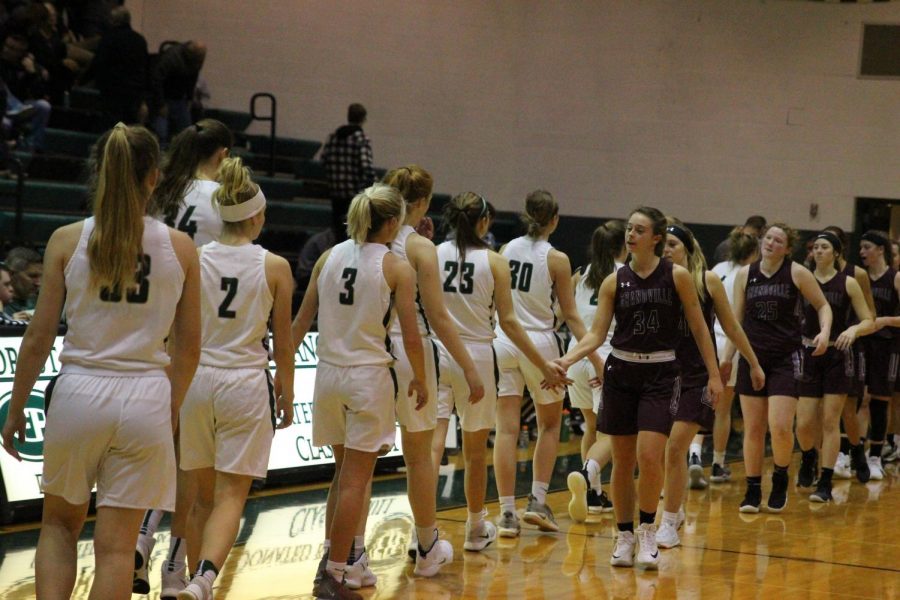 A career-high scoring night from junior Ally Ringler with 19 points was the spark the Lady Rangers needed to take down Grandville 66-51 in an impressive offensive showing last night.

“I felt like coming into [the game] my shot was on, so I knew that it would be a good game,” said Ally, who also had 3 rebounds and a steal.

Four out of five starters finished with double-digit scoring, with senior captain Claire Baguley once again ending as the leading scorer with 20 points on the night. Freshmen Remmie Ingraham and Theryn Hallock added 13 and 12 points, respectively.

“If we can have four players score in double digits each game and play like we did tonight, we’re going to be really hard to beat,” said Claire, who also had 8 rebounds and 3 assists.

The starting five were the only players to score for the Rangers last night, with senior Kaitlyn Piontkowsky adding 2 points in addition to her 10 rebounds.

“Honestly all of our starters had really good games,” head coach Kristina Prins said. “[The starters’] intensity is so high in the first half but then we just die down, so we really need some girls on the bench to be able to step up.”

FHC’s first points of the game came, once again, from Theryn on an unassisted steal and layup for 2. The Rangers went on a 7-0 scoring run to start the game and led 13-1 with just under three minutes left in the first. Fatigue set in for the front five after the fast-paced start, and the Bulldogs crept their way back into the game. Grandville shooting guard and leading scorer senior Anna Hurley found her shot from behind the arc and closed FHC’s lead to 15-10 after the first.

The game would not come closer than that 5-point gap, as the Lady Rangers went on a 13-0 run to start the second quarter and went into halftime leading 32-16.

Remmie’s hand got hot in the third quarter, as 10 of her 13 points came after halftime. Ally also continued her fantastic shooting to score a solid 9 points in the second half.

“It’s really nice to have a player like [Ally] on your team that can just knock down shots when you need her to,” Claire said.

Grandville kept responding with deep three-pointers, but the Rangers would never have less than a 12-point lead for the rest of the game. With 50 seconds left, Prins cleared the bench and walked away with the win.

Two dominant offensive outings put the Lady Rangers at 2-0 on the young season with a lot of potential but plenty to work on, according to Prins.

“Our rebounding [was better this game] which was a big thing we worked on, now we just have to clean up some areas,” Prins said. “I feel like when we pick up an area we start to digress in other areas, but we’ll work on it.”

FHC will specifically work on being better conditioned and reducing turnovers before they take on cross-town rival Forest Hills Eastern at home on Friday.

“The confidence is really high [after these wins], but we have to keep that momentum and keep that intensity,” Prins said. “Every team we play is going to want to beat us, so we just have to play at a high intensity for the entire game.”