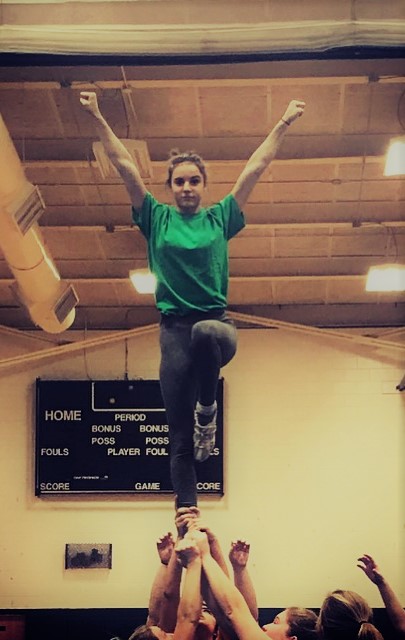 She did ballet for two years when she was little and met Dora Pomeroy, a senior on the team
She did gymnastics for five years
She loves to snowboard
She loves to hang out with her friends
She rarely gets free time

How long have you been cheering?

“I started sideline cheer in third grade and will continue to cheer all through high school. I have many positions in cheer. I am a tumbler, or someone that does backflips. I am also a base, which is the person at the bottom of the stunt holding the flier’s foot. We keep [the flier] in the air, make sure she is safe, and catch her if she falls. I am also a flier, or the girl on top of the bases. A flier has to stay super tight and squeeze every muscle in her body. We also have to have super good balance and upper body strength to keep ourselves in the air. It is a lot of fun but can be very dangerous at the same time.”

Why do you cheer?

“I cheer because of the friendships and memories I create with my teammates. Just the experience of meeting someone new is cool to me. You build a bond with them, and they just become family to you. Cheer has always held a special place in my heart, from the late-night practices to the pump ups in the locker room before we run on to the mat. The celebration that happens after running off the mat and my coach running over and hugging me and saying, ‘You hit it!’ really is the best part.”

Who has been your biggest inspiration in your competitive cheer career?

“I would have to say my biggest inspiration to do cheer was probably my coach. She just really made me feel like I could do anything if I tried and practiced the same thing everyday. She has taught me that if I set my standards high, I will reach them. She also is very funny and open. We’ve definitely created a bond that will last a while.”

Who inspired you to join competitive cheer?

“My best friend inspired me to do competitive [cheer]; she goes to Forest Hills Northern. I thought it would be a cool opportunity to try something new. She was on the team with me and she taught me a ton of new things I never knew. I’m so glad I tried competitive [cheer] because I absolutely love it.”

What is your favorite cheer memory?

“My favorite cheer memory would probably have to be when I had to replace Grace Conn in the last round half an hour before we went out [last year]. I felt so bad for Grace, but I knew I had to do it, and I did. I was scared and nervous, but in the end I knew I took one for the team. It was cool how all the teams lined up for us because they heard what happened and wanted to wish us luck.”

What is your favorite round in competitive cheer?

What three characteristics do you feel are most important for cheerleaders to possess?

What do you think are the team’s best qualities?

“I think the team’s best quality is our ability to be there for one another and have that bond of friendship. It’s really awesome to be on a team with such great teammates.”

Talk a little about your time being a part of FHC competitive cheer, this year and previous years.

“Being a part of the FHC competitive cheer team is really cool. Last year was the first year FHC has had a competitive team in many years. I think the biggest thing that struck me was [although] we were a new team, throughout the whole season we scored mostly second and third place out of ten to fifteen teams that we competed against. I think that really blew people away. I am expecting an amazing season. Our head coach Olivia Obetts works extremely hard and has done an amazing job. This year we have a new assistant coach, Andy Brown. He is a cheer coach at GVSU. I think with both of our coaches we will really improve.”