E-Achieve Leaves Staff with Unique Problem: What to do With Lab Space? 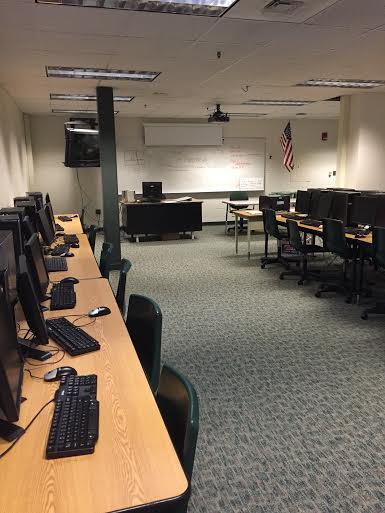 As the school year progresses into the second semester, the e-achieve initiative is in full swing, and has received generally positive reception from both the student body and staff. Laptops in classes have become commonplace, Google Classroom has become a popular tool, and programs like Moodle have made submitting work easier than ever.

While these advancements around the building have been emphasized, applauded, and recognized, one aspect of the initiative that has gone overlooked is a glaring issue: empty labs. Central’s numerous labs have been widely unused this semester, and the media center has devolved from a bustling hub of students using the labs to a quiet, often-abandoned space. Kris Schrotenboer, the building’s technology expert, recognizes the overlooked problem that e-achieve has caused in empty labs.

“With the labs, we honestly didn’t know how much teachers would use them,” Schrotenboer said. “We decided to keep them in their current states because we also didn’t know how many of our kids would bring in their own devices, given that it was a BYOD initiative. In the fall, we saw quite a bit of action in the labs; teachers found that habit hard to give up but as students showed up with their own devices, teachers stopped going to the labs and started keeping students in the rooms. The class devices also arrived, and suddenly students who did not have access to their own devices had access to the devices provided by the school.”

In comparison to staff opinion surrounding the issue, students agree that the labs just are not as useful as they used to be. With almost every student carrying around a laptop, as well as teachers having numerous Chromebooks at their disposal, obviously reduces the need for desktop computers in computer labs.

“I feel like it has been a lot different than last year,” said junior JJ Rabideau. “There have been a lot more lap tops out in class, which has been helpful.”

“I think staff members were skeptical about eAchieve but we have been pleasantly surprised by its success,” Schrotenboer said. “Some staff use it exclusively, others use it for document distribution, and still others use it a lot less than that, even. But it’s been a good transition.”

Moving forward, the staff has tossed around multiple ideas on what to do with the empty lab spaces, and many of the ideas could catch the attention of students. With so much space that is sitting idle, the administration is in an unusual situation, having to create uses for an excess amount of space. Schrotenboer says that the staff and administration will work together to decide the most appropriate and effective use of the empty labs. While the staff definitely has certain opinions and ideas surrounding labs, most of the decisions will be left up to the administration, according to Schrotenboer.

“It’s not our call; that is something that will be decided by the administration in this building and at Central Office,” Schrotenboer said. “One consideration is that right now, the M-Step is taken using computers, and the M-Step cannot be taken on a Chromebook because of the software it needs in order to be able to run. I am sure that will have an impact on whether or not we keep the labs.”

The redesign of the lab space will come at an interesting time, as Central’s media center is being completely revamped during the Summer of 2016 in an attempt to make the space more welcoming and accessible, as well as technologically friendly. The media center redesign will still include space for a lab, but will focus more on charging stations for laptops and more furniture in the attempt to create more of a college library environment. The media center redesign could influence the decisions regarding the labs, according to Media Material Clerk Dora Fowler.

Schrotenboer agrees and recognizes that the media center is in need of a major redesign.

“Our media center desperately needs an overhaul,” Schrotenboer said. “I think it is a consideration, honestly, and given the idea that the media center should be the hub of the academics and socialization of the school, it an important development in our school. It’s exciting because it has been so long in coming.”

Students and staff agree that the redesign of lab space is a small price to pay for the success of the e-achieve initiative, as it has provided students with the skills they will need to succeed in the future, as well as provided teachers with the tools they need to teach effectively. In terms of the labs, it remains to be seen what action will be taken. One thing is for sure, student technology use is changing, and according to Schrotenboer, the shift from labs to laptops has been beneficial for both students and staff.

“It might sound crazy, but even those few minutes saved helps because a teacher does not have to start and stop and start again,” Schrotenboer said. “Students are in the seats and ready to go.”