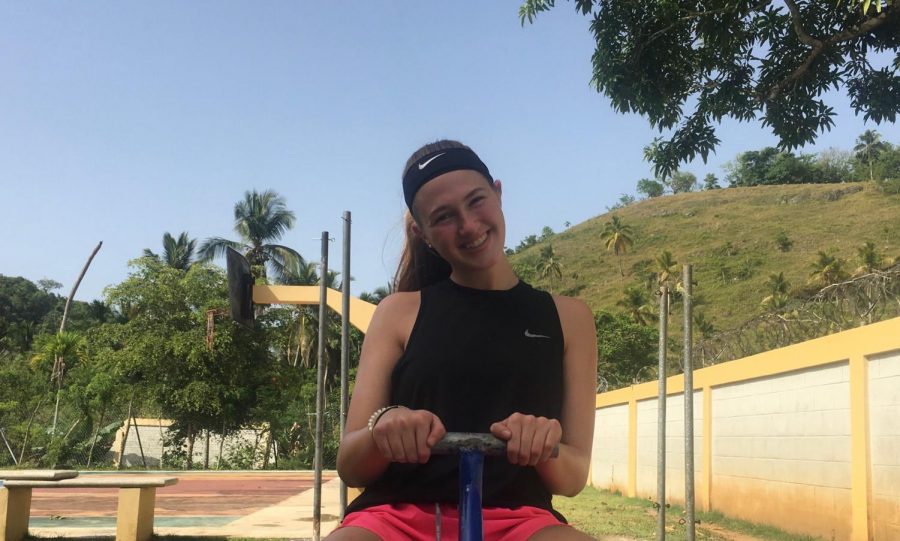 Through every single volleyball game, senior Katrina Bodkins is unmistakable with a noticeably bright white headband decorating her hair. Creating this signature look has taken since seventh grade, and now, Katrina is faced with the daunting end of high school and the closure of her high school volleyball career.

“It’s kind of bittersweet,” Katrina commented about the end of volleyball. “I’m really proud of [who] I’ve become as a volleyball player, especially senior year [with] being a captain, having to lead fourteen other girls, and being an example for your teammates. It’s definitely bittersweet. I’m glad I got to experience [it] but sad that it’s over.”

Rewinding to when it all began, Katrina stepped out of her comfort zone in middle school with some persuasive encouragement to support a friend who was starting volleyball by also joining the team.

Spikes, bumps, and sets quickly filled her everyday thoughts as years progressed in tandem with Katrina’s skills. Quickly, she developed a passion for dominating the court; putting on her white headband became second nature, and she was focused solely on the game.

Her competitive spirit and dedication on the courts kept Katrina playing even when the friend she had joined with had quit; however, despite her friend leaving, support from all parts of her life kept her invested in the sport.

At home, even though her parents were unfamiliar with volleyball and were more inclined to understand other sports, they embraced Katrina’s volleyball career with open arms. At school, her friends and classmates also kept her going.

“My parents definitely were really supportive and wanted to learn about volleyball,” Katrina said. “They came to every single game, and they wanted me to teach them our plays. Even teachers were always really supportive with [volleyball]. It was like everyone was invested in it; I just felt support from everyone. I guess everyone knew that volleyball was such a big part of me, so if it was important to me, it was important to the people that care and love me.”

Katrina continued to challenge herself at practices and kept returning every year, whether for the sport itself or for the people she had met through it.

“I started to really enjoy it,” Katrina said. “I started getting a lot better at it, and I started making a lot of new friendships with it. I enjoyed it and wanted to hang out with the people that I met throughout.”

Through the intense practices and game-winning moments Katrina often experienced on the volleyball team, her teammates became close friends as they spent countless hours together.

Having played volleyball for six years—and on the varsity volleyball team for the past three—Katrina has had time to truly know whom she’s playing with and connect with the close friends she has made. Playing volleyball together, a sport that heavily relies on communication and teamwork results in close friendships that help win games, but this also makes it hard to leave it all behind.

“It’s been a part of my high school career,” Katrina said. “Leaving that behind and leaving some of the younger girls behind [is] always really sad. I’ve met a lot of great people through it, so I’m definitely going to miss that. It’s even weird being in school and not playing volleyball right now.”

With graduation just around the corner, Katrina has been able to reflect on who she is and what she plans to do. Like many, she hopes to keep her passion for volleyball in her life, but no matter what, she is grateful for what her beloved sport has done for her these past six years.

“It [has] opened my eyes and forced me out of my comfort zone and my classic group of friends at school,” Katrina said. “And I know it’s really corny, but it is kind of like a family. When you’re around those people all the time, and you see their personalities and who they really are, you get a lot closer to them. I think they’ll always be important to me and good friends. I’ll always have their back no matter if we’re in season or out of season.”