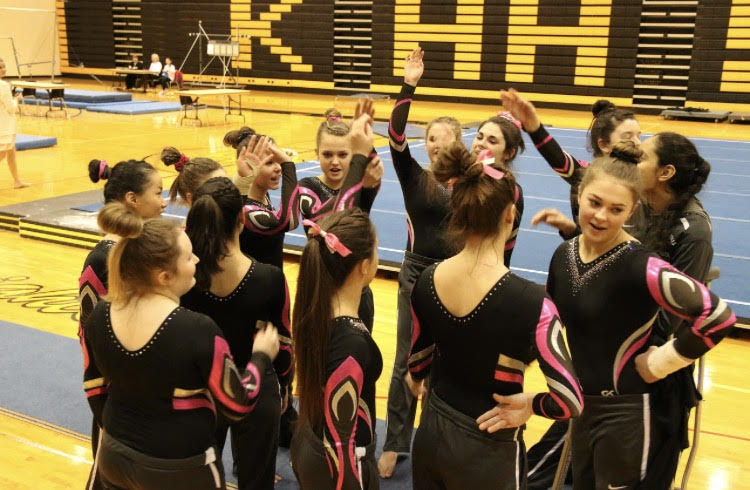 After a somewhat successful 2017-2018 season, disrupted by a devastating loss at the end of the year, the Forest Hills gymnastics team is looking for redemption going into its new season.

“Individually, I didn’t do as well as I would have hoped last year,” returning junior Olivia Jeong said. “As a team, we probably could have done better. But I am really looking forward to accomplishing all of our team and personal goals this season.”

Last year, the Forest Hills gymnastics team’s only conference and regional losses were to the gymnastics powerhouse in the area: Rockford. Forest Hills fell to the Rams twice throughout the season; however, these were not blow-out meets, and Forest Hills hopes to turn the tables on Rockford as they head into this season.

Coming into the season, the team is missing four graduated gymnasts who were key contributors in all of the meets last year. FH does have two new gymnasts that will be on the team this year and several returners who hope to make a big impact this year.

“Last year we lost four seniors who were key contributors to the scores of our meets,” Olivia said. “However, we are all stepping forward to fill their shoes, and we have two new gymnasts who are great additions to the team both skill wise and just overall.”

One of the returners to the team that will be a huge contributor this season is junior Hannah Walters. Hannah has been on the team for three years and has been a stellar teammate in all aspects in and out of the gym.

“Hannah is definitely going to be a huge part of our team this year,” senior gymnast Maheen Mulligan said. “She is strong at every event, but she is currently out with a foot injury, so we all just hope she can come back strong as soon as possible.”

Coming from three different schools in Forest Hills, it would be assumed that team chemistry is lacking, but that is not the case. All three Forest Hills schools combine to make one ten-person gymnastics team, and the girls are making the most of it by building up their team chemistry significantly.

Overall, the Forest Hills Gymnastics team is looking forward to a great redemption year in hopes of a better outcome than last season. Every gymnast will be key to the team’s success, but it is up to them to decide who is going to step up and lead the team to success in this new 2018-2019 season.

“The team chemistry is wonderful this year; it is a really small team, so all the girls are really close,” coach Stacy Steensma said. “Everyone is going to have to step up and be a leader this year, though, because we lost a lot of talent last year.”