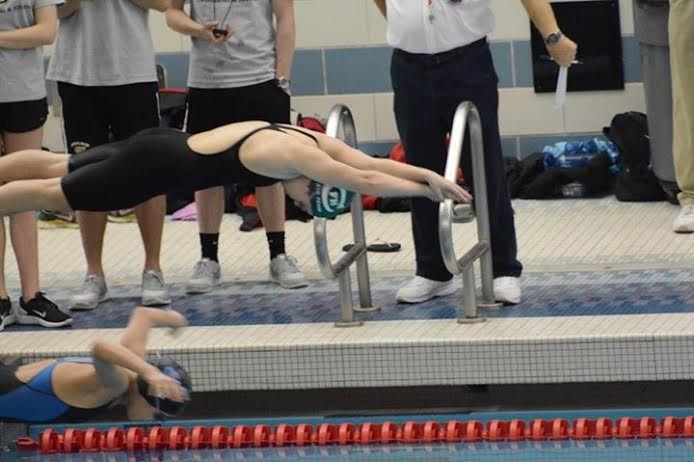 After many years of hard work and dedication, senior swimmer Alex Horman has decided to further her academic and swimming career at Albion College.

“I started swimming when I was in 6th grade,” Horman said. “And I just haven’t stopped since.”

Horman, like many athletes, had a few bumps in the road early in her swim career. At her first couple of competitive swim meets, she had some DQs and other struggles because she was not yet experienced swimmer. However, she decided to get back in the water and keep training in spite of the many difficulties that she faced. And it paid off.

Horman’s love for swimming along with her dedication has left her as a 4 year varsity athlete, a 3 year all conference athlete, and a 2 year all state athlete.

According to Alex’s mom Laurel, Alex has always been able to stay positive and focused on her goals. Alex’s perseverance paid off to the point where she was the Conference champion her by the end of her sophomore year. After her junior year, she set a goal to swim at the YMCA National swim meet and she was able to swim at two different National Meets last year.

Alex has continued to grow as a swimmer throughout the years with both her club team, the RAYS, and with the high school team.

Laurel explains that Alex really enjoyed the meets that she participated in with the RAYS National team last summer. And that traveling along with the team and experiencing that level of swim inspired her to respond to the recruiting process.

Alex is now ready for her next step, one on to a different swimming block than the one at the Forest Hills Aquatic Center. Alex decided that Albion was the perfect fit.

“I really liked that they had the major that I wanted which is environmental science,” Alex explains. “The campus is also really beautiful and it’s small which gives it that homey feel.”

Laurel adds that Alex really wanted the full college experience and Albion offered her that along with a chance to swim. She also explains another strength of Alex’s, saying that she was never concerned about being in the “spotlight,” she just wanted to do what she loved to do, which was swim. She decided to focus on what was happening in the pool and to let her swimming be the focus of her leadership style. This helped her by allowing her to stay focused and continue to improve her swimming.

Alex finished her senior year by being part of Lady Ranger State Swim team that took third place at the State Swim meet this year. Coming off of this, Alex is looking forward to the next part of her swimming career.

“I’m very excited to swim at Albion,” Alex said. “When I went on my visit I realized that the rest of the team and I just really got along, and I’m excited to start my next chapter as a Brit.”