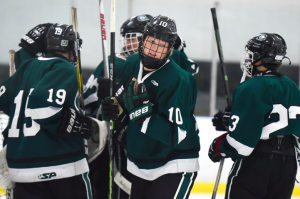 Walking into Patterson Ice Center, the aroma of worn skates, the sounds of enthusiastic cheering, and the empowering looks of determination fill the rink. The players of the FHC Varsity Hockey Team await the vociferous ring of the buzzer as they prepare to chase the puck across the ice.

“Our team has really come a long way since the beginning of the season,” said junior Zak Currie. “We have bonded a lot and we trust and work well together.”

With many wins and few losses, the team has proved their determination, dedication, and hard work ethic. Most of the players have been playing for 10 years, and some even longer. The team practices 4 days a week and every Tuesday morning at 5:30 a.m.

“[Being on the team] has taught me a lot,” said sophomore Charlie Brewer. “Even if it’s hard, you have to do your best and not make any excuses.”

As the only freshman on the team, goalie Carl Mielock comments that you always have to work your absolute hardest. You can’t fall behind or lose focus because then you could be replaced.

“When I first found out that I made the team, I was definitely a little nervous,” Carl said. “I knew that I was the only freshman and I knew that I was going to have to really push myself.”

Although Carl is only a freshman, he has made big leaps and assisted in many of the team’s wins. He is trusted among his teammates and is said to be a very hard and diligent worker.

“Carl is a great goalie,” Zak said. “He brings a trust factor to the team and we all have a lot of confidence in him.”

Despite how tough and tiring the season has been, none of the players want it to end. The team has formed a deep connection and throughout the season, they have bonded from triumphs against rivals to weekend hockey tournaments.

According to Carl, one of his favorite parts about being on the team is hanging out and meeting a bunch of upperclassmen.

“We all just enjoy hanging out together,” Charlie agreed. “We always see each other at practice and when we beat a rival team, it gets pretty crazy in the locker room.”

Through the good times and bad, the hockey team has formed memories, shared knowledge, and grown to be reliable and trustworthy teammates.

“We have all come together this season, through the wins and losses,” Zak said. “They have really defined us as a team.”

As the season may be coming closer and closer to its end, there are still a few goals that the team is hoping to accomplish. They are hoping to continue to play their hardest and hopefully win at states.

According to all of the boys, winning the hockey state championship would be an amazing accomplishment. Through hard work, dedication, and determination, the team has come a long way and we wish them the best in their upcoming games.

“Being on the team has taught me that you always have to work your hardest,” Carl said. “No matter what happens, just come, play, and do your best.”