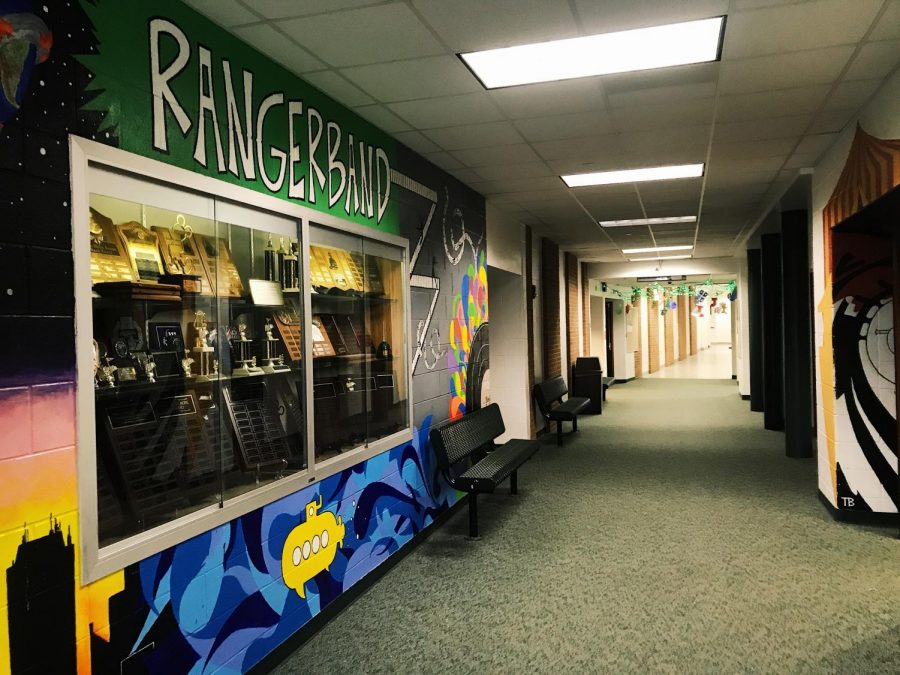 In the past three years, a tradition was born. Junior Alexander Hahn, who had never been without it until this year, is sad to see it go.

“ [The collage concert] was a great, great concert,” said Alexander, who plays the violin and has been in orchestra since freshman year. “I love being with everybody. As an orchestra person, we’d have to all be sitting, and the band was sitting around us– the band’s always very loud–and then you have the choir; It was fun to be out with all of your friends.”

The concert was a time for the majority of the music program to get together and play holiday music. Both main bands, many of the choirs, and orchestra would all attend. Each group would prepare a few songs to play in this two to three-hour concert.

However, the real tradition lies in the final song played, “Sleigh Ride.” Every single musical group would cram onto the stage to perform the finale of the concert all together. Alexander still can recall his first experience doing so.

“I remember, quite vividly, my first time doing ‘Sleigh Ride’ because I was in [the] first violins [section],” Alexander said. “In that, you go into seventh position, which is where you go up in the stratosphere with notes, and it’s just crazy how high up you go onto your fingerboard. It was super scary; you have all these people that are all experienced around you. It’s fun to be able to play and grow with these other people.”

The freshmen this year never had the chance to encounter what Alexander did; this annual concert was cancelled. Instead, each group had a separate holiday concert. Throughout the past two weeks, band, choir, and orchestra have all had their respective concerts.

The decision to forgo the collage concert was a joint one between the music directors. To them, there was more value in separating concerts because their students and budding musicians would be able to perform more songs.

“The worst part was all the waiting,” Alexander said. “There was just tons of downtime, and it took forever. So, now, the concert is more ‘in, music, out,’ and it’s easier.”

Alexander isn’t alone. This aspect of ditching the collaboration concert was appealing to many students, including senior and choir member Maria Finelli.

“[The collage concert] takes so long,” Maria said. “[The divided concert] was a lot shorter, which is nice because we could get home and do homework earlier.”

Despite its sentimental value, Maria overall prefers the divided concert. Similar to the collage concert, many of the choirs joined together for their holiday concert. During this recent concert, not only were they not drowned out by the instruments, but they were also able to make use of their full performance time.

“We get to sing more songs ourselves,” Maria said. “We get a little bit more time on stage when it’s just the choirs. We learned a lot more music. So, we sang Christmas songs, but we also got the chance to sing not Christmas songs. We learned a song in a different language which was really fun.”

Furthermore, the collage concert was a source of chaos many students would be fine without. With a large number of performers, the disarray can be quite complete. Transitions between ensembles were carefully planned out and practiced. “Sleigh Ride” itself was stressful; the different groups never had a chance to practice with one another until the day of.

Sophomore and band member Katie Ritzema loved the collage concert, but she didn’t deny that having a smaller concert helped the disorganization.

Besides this added bonus, Katie still misses playing with all the groups. The collage concert allowed her to play with both Jazz Band and Wind Ensemble in the concert. Playing with the orchestra, in Katie’s opinion, gave the concert a feel resembling a symphony. The choirs added a new level to the music as well.

“Nobody really comes to the concerts,” Katie said. “[At the collage concert], it’s the parents of all three groups, instead of just a few band parents coming. You feel like you’re actually performing versus like, ‘Well, my mom is watching me, she hears me play all the time.’ “

“It helps the musicians feel more confident when they see people, not only their parents, but students at school supporting them like a sports game,” Katie said.

Katie was a big supporter of the collage concert and hopes it will come back in the future. One main reason is because of the culture it built in the music program. Katie believes with the discontinuation of this joint concert, the music program is less unified.

The collage concert allowed many music students to watch and support other musical organizations. Often, concerts are not publicized, so they are easily forgotten and missed. Other times, students’ lives are so busy that it can be hard to make time to attend and support other parts of the music program.

“The best part was seeing the other groups and just hearing them play or sing,” Katie said. “It’s really interesting to see because sometimes you kind of forget– you get so focused on your instrument or your ensemble– that there are multiple ensembles in the school that all do the same thing. So, it’s really cool to see how gifted some of the students are.”

Even so, Katie can’t help but have mixed feelings about the end of this tradition. As a senior, the goal is to experience everything high school has to offer to the fullest, and this concert has been a constant annual part of her high school experience.

“I’m a little disappointed, especially since it’s my senior year,” Katie said. “I was really looking forward to it being the last time that I got to put on my Santa hat and be on stage with all the other ensembles. Even though it’s kind of a discombobulated mash of everyone, it’s still something I’ve done for the past three years and look forward to every year.”