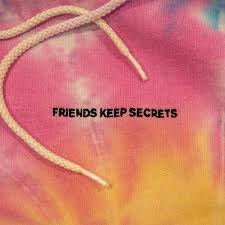 Earlier this year, breakout artist Benny Blanco released his debut single “Eastside,” featuring Halsey and Khalid, and the hit soon became one of the year’s most streamed songs with its catchy beat grounding its playful and high-spirited message.

As a self-confessed “over-streamer” of this song, I spent many hours with “Eastside” playing in the background as it slowly became my summer anthem. Thus, I was very excited to see Blanco’s new album FRIENDS KEEPS SECRETS added to Spotify’s “New Music Friday” playlist. Alas, I was unfortunately underwhelmed by Blanco’s new release.

Clocking in at just over twenty minutes with seven songs, I felt that I couldn’t get a hold on the message or vibe that Blanco was trying to convey. Perhaps if the album was longer, there might be more meaning embedded within it. After all, how much can really be imparted to listeners from an album shorter than most episodes of TV?

The main reason behind my disappointment with FRIENDS KEEPS SECRETS is how lacking it is compared to other impressive choices released this year, mainly due to a lack of depth.

In our recent age, music has become a form of expression. Like writing and artistry in eras before us, now more than ever, music is a way for the misunderstood and the passionate to communicate with the world with each transition, beat, and album cover. This is especially vital in the indie/pop industry and evident in recent releases from artists like The 1975 and Bastille, but I simply do not see this reflected in Blanco’s album.

For this reason, especially, I’m confused as to the title of the album —FRIENDS KEEP SECRETS — as I still can’t see a link between the album and the music held within it. I kept waiting for a revelation or big disclosure, but by the time the short twenty minutes elapsed, I was still left confused.

In addition to this, I felt a lack of flow between the seven songs and no connection linking them together. Thus, a rather “start-stop-start-stop” sensation was generated. It’s not to say that the songs themselves weren’t enjoyable, but the album seemed to be an assembly of several distinct pieces rather than a collective work radiating cohesion.

Cohesion and meaning aside, there were some standout picks in “Roses” and “Break My Heart.” The former features breakout rapper Juice WRLD and Panic! At The Disco singer Brendon Urie, while the latter spotlights Ryan Beatty, a newcomer to the indie field. These variations in guest artists were thrilling and a refreshing change from their rather mundane surroundings.

Additionally, it’s important to mention that Blanco partially made up for his lack of artistry in the “vertical videos” produced to play on Spotify. The vertical videos uploaded served as a collection of video clips and images, many of them with abstract, colorful demonstrations, to accompany three of the songs. However, similar to the songs, the vertical videos were entertaining but lacking in true substance.

While the release of FRIENDS KEEP SECRETS rendered me with a few new songs to add to my playlist, I can’t say that the album as a whole was impactful. Compared to the depth, both physically and metaphorically, displayed by other recent artists, I was sad to see that Blanco truly fell short in his debut album.