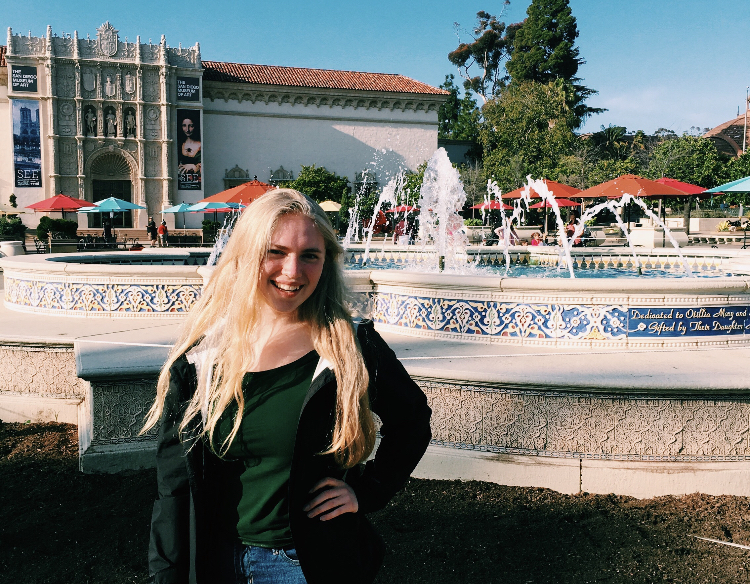 For three years, junior Susan Toppen has been taking advantage of the exciting opportunities high school has to offer. Following in her older sisters’ footsteps, she is immersed in both band and many aspects of theatre. She loves the thrill of being on stage, watching the magic happen behind the scenes, and the interesting environment of band.

Growing up, going to her sisters’ band concerts developed her interest in the atmosphere. When she stepped into it herself, she took up playing the trumpet.

“As my mom likes to put, I’m like the third daughter,” Susan said. “The third has to be heard, in a sense. Both of my sisters played woodwind, [but] I wanted to be different, and I thought the trumpet was really cool.”

Susan has also been doing stage crew since her freshman year when her sister was student director. She loves watching the pieces come together and create a beautiful show. This sparked her interest in acting.

“The people in both of them is what makes it so special to me,” Susan said. “As much as I love being backstage and seeing how every little part comes together, I also love being on stage and performing and becoming someone else. It’s really cool.”

But Susan hasn’t always felt so at home in the often chaotic world of high school. She recalls being intimidated by the abnormal routine during her freshman year. However, she quickly came to realize how much more freedom she was granted and how much less judgment was thrown her way.

And she couldn’t have gotten this far without a loving and down-to-Earth group of friends.

“In middle school, and even in high school, everyone told me, ‘You are not going to keep your same friends,’” Susan said. “‘You are definitely going to lose some, but maybe you’ll keep one or two.’”

However, Susan did not find this to be true in her case. Since sixth grade, Susan has relied on a core group of friends to always be there for her. Now, in her junior year, these people remain dependable.

The same friends that suffered through the awkward days of middle school with her are the people that now come to her house on the weekends to play board games and watch movies.

“That fact that I’ve had this core group of people that have just been around me and [are] just great people [and] very supportive,” Susan said, “[is] one of the best things that have ever happened to me, and I just love them all.”

Susan’s friends are always there with encouraging words as she battles the unavoidable stress of high school. She has realized that she sometimes needs to put extra time and effort into getting good grades. But when things seem impossible, Susan knows her friends are just around the corner with words of motivation.

Their similarities are what draws Susan’s friend group closer together. Susan is a “fixer.” When she sees other people struggling with issues, she is drawn to help them figure it out. This loving quality was also present within many of her friends.

“I realized that some of [my friends] were the same way and trying to help me with my things, and it was a very mutual relationship in that sense,” Susan said. “It was just such a cool experience because I never had anyone that cared for me in such an honest and true way.”

Susan has surrounded herself by people who want her to succeed and help her to become the best version of herself. She’s held onto these friends by making sure every relationship is not only the best for her, but also the best for everyone else.

“I think it’s important,” Susan said. “You know that no matter what happens, you have people around you that are there to support you and love you, and [they] just want the best for you.”