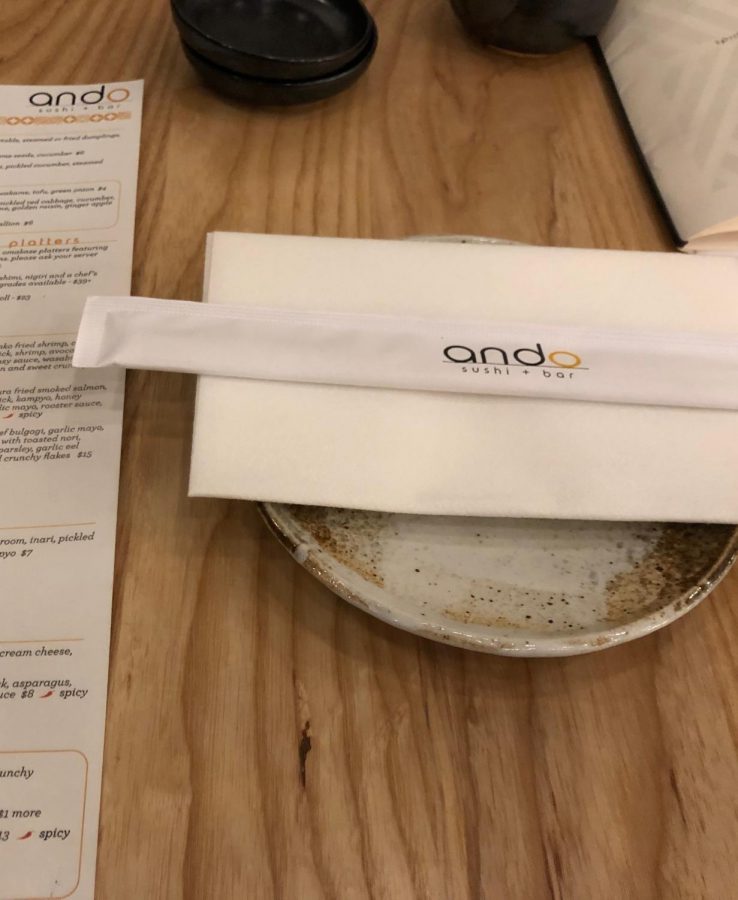 As a severely picky eater growing up—I wouldn’t even eat something if it wasn’t the brand my mom used at home and from the same store—harboring a love for sushi surprised everyone who knew me, to say the least. Constantly casually catering to my insatiable cravings for sushi as a kid, I became an under-the-table sushi connoisseur.

It was yet another one of these continuous cravings that brought me onto the busy roads of downtown Grand Rapids in search of Ando Sushi + Bar. Rocking out in the car to the masterpiece album Trench by Twenty One Pilots, my mother and I almost missed the modern restaurant that Ando appeared to be. On a street corner with chic paneling and large, welcoming windows, the strenuous search for scarce parking had set my expectations high.

After finding sketchy parking that made me question road laws, the brisk walk through the frigid night made the entrance into Ando’s sleek and amiable atmosphere ten times more welcoming. The host, instantaneously noting how bundled up my mother and I were, greeted us politely and showed us to a tiny table for two in the corner. Huddled between a giant plant and a comfortable bench, the chic exterior transferred into the flowing, contemporary decorations.

Perusing the menu, I felt trapped like I was in a box with the options; the food available was scattered throughout various categories, but no category was fully expanded upon. There were appetizers, noodles, grilled food, or the classic sushi rolls. Stuck between items on the limited menu, I ordered the vegetable fried gyoza ($7) and a chef’s special sushi roll ($23).

My decision didn’t take long, seeing as the menu was only one page, so the waiter was back in seconds to take our orders. This quick service, despite the busy restaurant, was a saving grace; I was starving, and I wanted my food.

The appetizer came out in mere minutes, and unbeknownst to me, it would be the best thing I ate. Vegetable fried gyoza had never let me down before in any of my other food expeditions, and this time, it was outstanding. Paired with a tangy but savory sauce to dip in, the awkward fumbling of chopsticks—I have yet to be taught how to properly hold them—was worth it. The vegetables tasted fresh and delicious while wrapped in the warm dumpling.

How quickly I devoured my food most likely concerned the waiter, but there was no shortage of food once my appetizer was cleared. A handful of minutes following that heavenly gyoza, my sushi roll came out: the chef special. By ordering the chef special, I had allowed one of the sushi chefs to create anything he or she preferred. Reinforcing the fact that I am a self-proclaimed sushi connoisseur, this had not been my first time ordering such a roll, so I knew what to do.

My only guideline was absolutely none of that deplorable cream cheese in the roll, and upon closer examination, the sushi roll thankfully contained none.

In the most refined manner I could manage as a fifteen-year-old, I began to eat my sushi roll. The tuna inside and on top of the roll was so tender that it practically melted on my tongue, and all of the flavors combined perfectly. The sauces drizzled around the roll to create a spectacular presentation added to the spice and tangy flavor that was provided, but I did have one gripe: there was an odd cilantro-tasting juice throughout the roll.

This odd flavor, off-balance with the rest in the roll, threw off the taste in my mouth; finishing the roll was difficult once my mind narrowed in on this slightly distasteful flavor, but I persisted nevertheless as I was aware of the hefty price tag. And man was there a lot of the roll to eat. The portions for the sushi roll were unlike any other.

Checking in on my mother, she gave a thumbs up for her ramen while happily digging in, but a thumbs down for her sushi roll, the Soy Joy, which further reinforced the growing opinion in mind that Ando was not up to my sushi standards.

In under forty minutes, my mother and I had finished our food and were itching to get back home. With the excellent service, we were soon out of there, but something inside of me was left unfulfilled as my food had slightly disappointed me.

For subpar sushi rolls, the main highlight of this restaurant, the drive into the city was not even nearly worth it; the food was expensive, with our collective order costing $66, with the only outstanding food being the appetizer, and I do not see myself returning seeing as there are cheaper, closer, and more quality alternatives nearby that can satisfy my next craving.