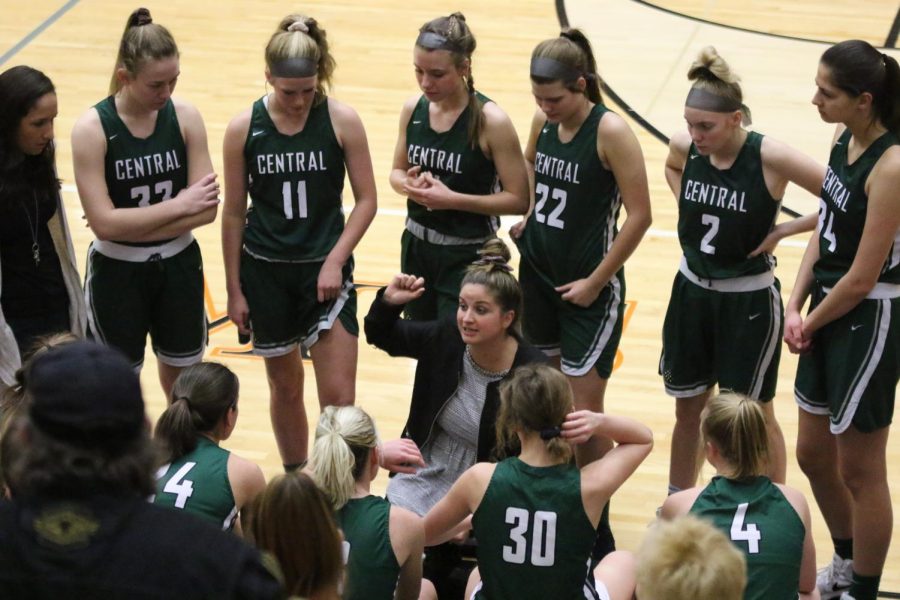 “Claire was spectacular on offense, no one could stop her for awhile,” said head coach Kristina Prins about her leading scorer. “She is just such a good leader and that’s helping with our younger players, but sometimes I feel like she is still too unselfish [with the ball].”

As a team that usually starts the game hot, the Lady Rangers had an unusual beginning to this one, as the first points came almost halfway through the first quarter. The score stood at 2-0, with FHC on top thanks to a freshman Theryn Hallock steal and layup for 2 of her 9 points on the night. Prins then took a timeout, which ended up being a turning point in the game.

“[After the timeout,] we really cleaned up our offense, cleaned up our shots, and had less turnovers,” said freshman Remmie Ingraham, who had 11 points and 5 steals last night.

From there, Claire scored 10 straight points and had 12 by the end of the first to lead 16-4 after one. The offensive explosion and the full-court Ranger press was a dagger to the NorthPointe offense, as they rarely moved the ball past half court.

“After the first couple minutes the momentum was really swinging our way,” said Claire, who was 1 point shy of tying her career-high in scoring. “We really just worked on our press and running the floor. We’ve always tried to limit our turnovers throughout the season and I think we did a better job of that tonight.”

Halfway into the second quarter, the Rangers led the Mustangs 26-8 and the full-court press continued to disrupt NorthPointe. NorthPointe senior center Kaycee Sluiter proved to be a problem once the Rangers dropped out of the press, as her height was unmatched on the FHC team. Kaycee ended the night with 21 points, 9 rebounds, and 4 blocks. Claire ended the first half with 21 points, and FHC went into the locker room leading 33-15.

The scoring in the third quarter was relatively even, as the Rangers only outscored the Mustangs 16-15 to lead 49-30 after three. In the fourth, each player off of the FHC bench worked their way into the rotation and saw some quality playing time. The NorthPointe starters flourished against the Rangers off the bench, and FHC was outscored 14-7 in the fourth. Thanks to Claire’s explosive night, however, the Rangers came away with the 56-44 victory.

“I still feel like we had some challenges,” Prins said. “We tried to get everyone in, but we just need some girls to be able to step up because that [game] should’ve had a different outcome.”

The Ranger defense was a large factor in this win, as FHC had 22 team steals and 12 defensive rebounds. Theryn and Remmie led the team in steals with 5 apiece, and Claire kept the Mustangs’ leading scorer to just 8 points on the night.

“[Their leading scorer] is a really good player, and she plays similarly to me,” said Claire, who also had 4 steals. “I like the challenge of guarding their leading scorer and trying to hold her to as little points as I can.”

The Lady Rangers move to 4-1 after this win, with their only loss coming to Rockford in overtime earlier this week. If the Rams win their first game in the Holiday Tournament, these two teams will find themselves playing once again next week.

“[This win] feels good, but knowing that we [might] have to play Rockford next week, we still have things to work on,” Claire said. “We definitely can’t just settle for this, but it’s good to go into a little break with a win.”