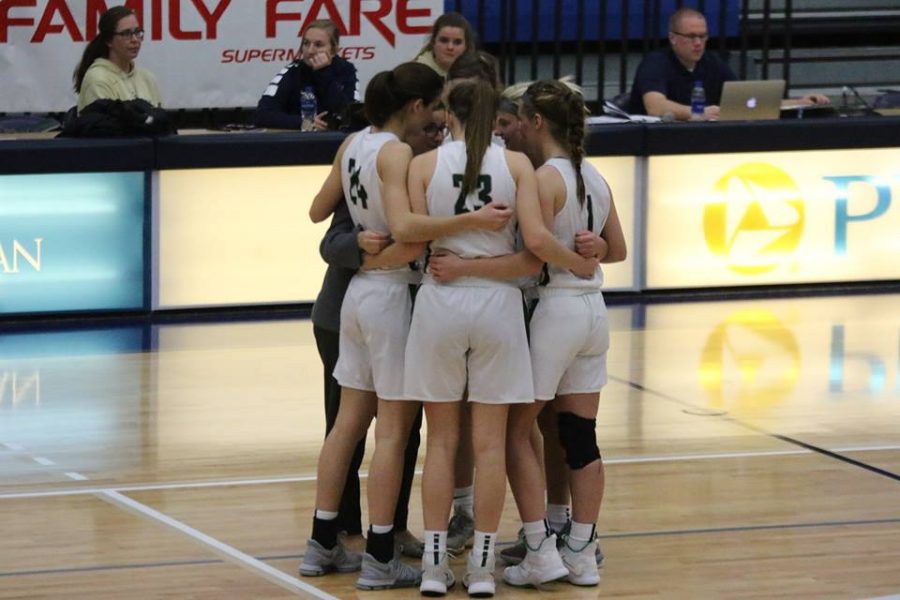 20 points from the Lady Rangers’ leading scorer, senior Claire Baguley, led the team to a revenge win over Rockford 45-37 in the championship game of the Cornerstone Holiday Tournament. Claire was named the Tournament MVP for her 50 points over two games en route to two wins.

“I think these were two of my best games of the season this year,” Claire said. “It feels good to get the win and be recognized for the hard work.”

After falling to the Rams by 3 in overtime last week, FHC was seeking redemption in this game and played one of the best defensive games of the season. Despite only recording 2 team steals, FHC played an exceptional combination of a 2-3 zone and man defense in order to hold a usually potent Rockford offense to minimal scoring by preventing quality shots.

“They are such a good offensive team, the fact that we held them to under 40 points just shows a lot of heart,” head coach Kristina Prins said. “I feel like this game we were more ready to play than we were last time.”

Both teams started out with lockdown defensive performances, as the game was tied at 2 for over half of the first quarter. Claire then took control of the game and scored 8 points in the first for FHC to lead 12-4 after one.

“They shut us down [early on], and we shut them down,” said freshman Theryn Hallock, who was named to the all-tournament team. “As soon as we started moving the ball, we beat their defense pretty well.”

The Rams found a spark early in the second and took the lead for the first time in the game with two minutes left in the half, 15-14. FHC found a couple buckets to respond, but Rockford was hot from behind the arc and went into the half leading 21-19.

“We had a little lull in the second quarter,” Claire said, “and at halftime we were talking about how we need to come out strong like we did right at the beginning [of the game].”

After quickly falling behind 28-19 a minute into the third, junior Ally Ringler created a spark for the Rangers by scrapping for a loose ball and earning the first bucket in what would be a big FHC comeback.

“Ally was on fire tonight, she had so much heart and so much intensity,” Prins said. “We felt like she was a little off last time we played [Rockford], so I feel like she was just redeeming herself.”

The Rangers became extremely scrappy after Ally’s basket and quickly came up with 10 unanswered points, capped off by a freethrow from freshman Remmie Ingraham to regain the lead for FHC, 29-28. After a bucket more from each team, the Rangers went into the fourth leading 31-30.

After missing much of the first half due to early foul trouble, Remmie came in during the third and was a big difference maker on both ends of the court. She earned a final stat line of 6 points, 5 rebounds, 2 assists, and 1 steal, most of which came in the second half.

The fourth quarter was intense, but the Rams never came closer than 3 points to FHC’s lead. Theryn really stepped up down the stretch, as she earned 10 of her 12 points in the second half, while Rockford’s star shooters went cold late in the game. With two seconds on the clock, FHC inbounded to ball to Claire, who held it for the 45-37 Ranger victory.

While fatigue for the FHC starters was a problem against the deep Rockford bench last week, it seemed to be the opposite in this game. The Rangers looked strong and conditioned down the stretch, while the Rams looked winded.

“I feel like the girls busted their butts in the second half, and I actually felt like we had the advantage,” Prins said. “[Rockford’s] starters never have to play a whole quarter like ours do, so I feel like our experience really helped there.”

FHC moves to 5-1 on the year and enters the first round of conference play in the OK White next Friday. On deck is a road game against the Northview Wildcats, which will be one of the toughest conference opponents this season for the Rangers.

“Last time it was really upsetting to come out of Rockford with an overtime loss,” Claire said. “Beating a really good team like [Rockford] feels good going into a little bit of a break and then a good team like Northview.”