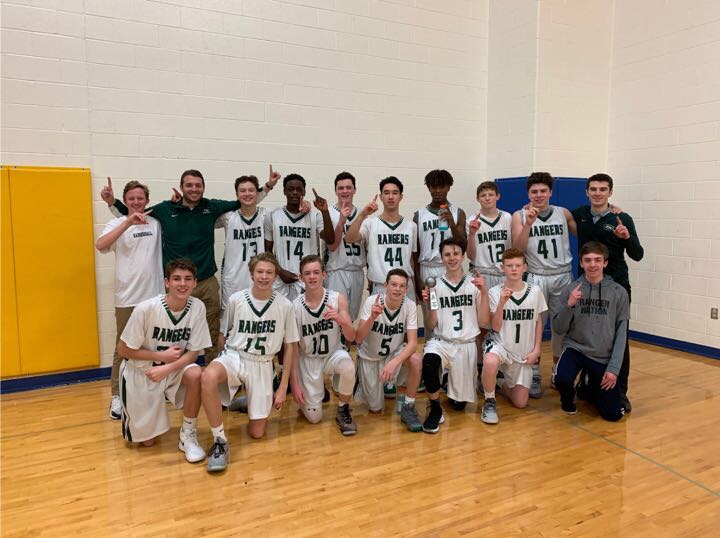 The boys freshman basketball team took home the trophy for the Holiday Tournament with two back-to-back wins against Covenant Christian and Rockford.

Freshman Pierson VanGorp had a season-high 14 points that led the team to the 59-38 win against the Chargers of Covenant Christian. The boys focused on their defensive pressure, which is what allowed them to stop their opponent in their tracks.

The Rangers got up early and showed their dominance throughout the whole game. Along with Pierson, freshman Jacob Bonnett scored 14 points and had many clutch defensive stops that allowed his team to continue to the championship of this tournament.

“I’m extremely proud of how our guys played today,” head coach Adam Monroe said. “From the five on the floor, seven on the bench, and two coaches; we were all together today. The ‘together’ mentality we have been preaching from our first practice was shown today.”

This second game against Rockford was huge; it meant the first tournament championship for the new coach Monroe and for the team. It also meant a big win over a dominant team in the area: the Rockford Rams. The boys knew what they had to do and got it done out on the court, pulling out the 47-43 win.

The game was fast-paced and unlike any game this freshman team had faced all season. With good shooters and a tall lineup, the Rams managed to pressure the ball on both ends of the court. Although the Rangers didn’t shoot the ball well, they still managed to put points on the board.

It was a back-and-forth battle on both sides until the last two minutes, when Rockford pulled away and were up by 5. The Rangers were unable to score until a clutch three-pointer by freshman Benny Scholler with less than one minute left in regulation. With the 3 points came another 2, tying the game and allowing overtime. The overtime was a mirror image of the game, for both teams came out fighting with even intensity. This was until the Rangers managed to pull ahead with two clutch free throws from Jacob Bonnett to secure the win 47-43.

These wins allowed the first real championship win for a new era of freshman Rangerball. The boys are now 4-2 in the regular season and face off at Northview on Thursday, Jan. 3 for the first game of the new year.

“The water bottle shower after the game in the locker room was something I will remember forever,” said Coach Monroe after the game.