“At Eternity’s Gate” is a beautiful, chaotic portrait of Vincent van Gogh in his final years 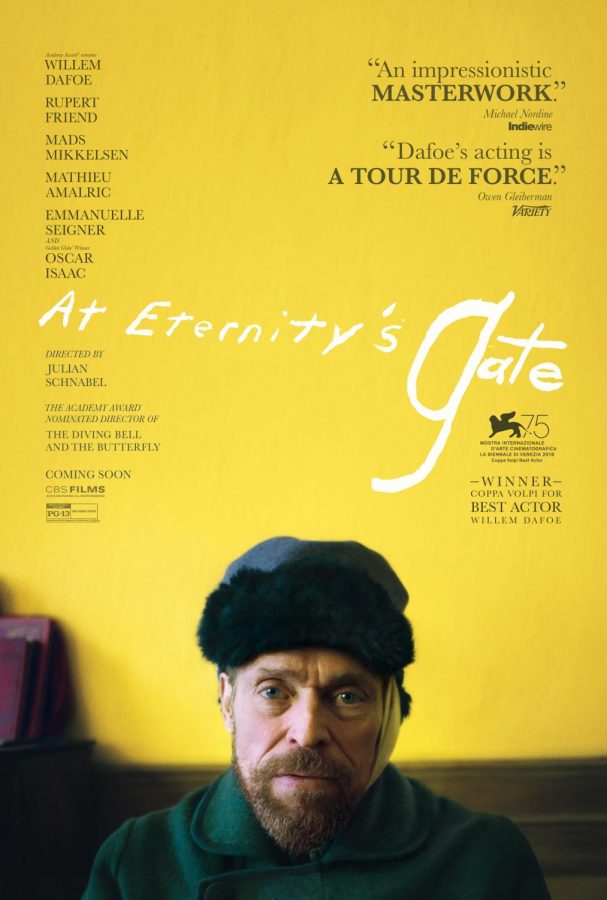 After almost a dozen different cinematographic interpretations of Vincent van Gogh’s grim life, it’s surprising to see director Julian Schnabel attempt to take on yet another perspective of the artist. In his biopic At Eternity’s Gate, the last few years of van Gogh’s (Willem Dafoe) life are portrayed in a unique way. It focuses on van Gogh’s relationship with his art through the film’s imagery more than its dialogue.

The film’s emphasis on symbolism resultantly creates a story that almost reaches an unparalleled beauty. Its stunningly filmed scenes and emotional depiction of van Gogh’s final years before his death capture his impassioned desire for painting. But the way it was often chaotically filmed left the story fragmented, ultimately dampening its power and gravity.

Over a span of 111 minutes, At Eternity’s Gate delves into the world of van Gogh during the late 1880s, specifically the last three years of his life. The movie begins in Paris, France, where he feels alienated by the coterie of artists that live in the city. Unlike the other artists, his art is viewed as abnormal and unpleasant, and for this, van Gogh faces constant ridicule and hostility.

To escape the ignorant people of his city, his only friend and fellow artist, Paul Gauguin (Oscar Isaac), urges van Gogh to go south to Arles, France. His move to Arles is when the story truly comes alive. Van Gogh’s experience in the south results in a full embrace of the natural world, and there, he creates some of his most well known, brilliant works of art that were considered points of mockery at the time.

Living a life exiled from the people and world around him led to van Gogh’s confrontation with mental illness, which moved in full force in his later years as he faced chronic depression, as well as other issues. Although this was never verbally explained in the film, it remained clearly apparent in other ways.

In Dafoe’s uncanny performance, his hollow stares and expressions vividly portray the sorrow and pain in his character. Dafoe fully embodies all of the emotion, consequently creating a piercing image of a tormented artist.

Schnabel further illustrates van Gogh’s mental instability through methods of filming. He emulates van Gogh’s style of painting and the disarrayed aspects of his life by including scenes that are blurred with shaky camera movements.

The symbolism is simple to understand, but with the accompaniment of an almost aggressive soundtrack, it felt overwhelming at times. The filming frequently felt intrusive as well, and Schnabel’s effort to send a symbolic message didn’t quite have the potent effect it was aiming for. Instead, it distracted from the story.

Beautifully filmed scenes of van Gogh painting in landscapes and in nature almost compensate for the intercalary chaotic moments, however. The capture of stunning, rich colors even further represents his paintings, and Schnabel once again uses cinematography to characterize van Gogh’s work.

As At Eternity’s Gate progresses and van Gogh spends more time in Arles, the movie quickly transforms from an appreciation of van Gogh as an artist to an examination on why he paints. These scenes of the movie are the most interesting because they truly unveil van Gogh’s talent and the emotion behind his paintings. His impulsive inclination for creating art, despite having little support, is strengthened during these moments, and it is inspiring to watch his resilience.

The movie gives the recognition to van Gogh that he never could experience himself. It showcases his talent through a blend of unpleasant and beautiful scenes that effectively mirrors van Gogh’s art itself, consequently creating an honest exhibition of it.

The unique composition of At Eternity’s Gate makes the film a brilliant one in theory. Although its power diminished with slightly chaotic filming methods, the movie remains beautiful, but not outstanding.