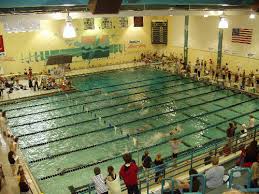 For many winter athletes, seasons are coming to an end and the stakes are going up. Their time is now, during the postseason. Championships are on the line, and many are preparing to take a stab at receiving their share of a trophy. One such team is the Forest Hills United Swim and Dive team, whose boys are set to compete in their Conference meet this weekend at East Grand Rapids.

Getting ready for Conference is no easy task. For these swimmers and divers, Conference is not simply another meet to attend and compete in. Conference is, in fact, the culmination of a season’s worth of work that they have been in the pool since November to get ready for.

“[The boys are] very excited,” said head coach Dennis Neat. “They’ve worked hard all year and they are looking forward to having a chance at winning a conference championship, something that hasn’t happened for 5 years.”

In order to prepare for their chance to win, the majority of the boys are engaging in taper, which captain Josh Ball explains is where swimmers reduce practice time and yardage swam per day in order to rest up for their big meet. He further explains that the boys need to do this in order to be competitive with and ready for their biggest competition at the meet: East Grand Rapids.

“East Grand Rapids for sure is our toughest competition,” senior swimmer Karsen Diepholz said. “They’re going to try to take us down with everything they have.”

Ball agrees, saying that the FHU team lost to EGR in their dual meet by 10 points in a meet that Diepholz cites as one of his favorite memories of the season. However, if the boys can take down EGR this weekend, they have a shot at taking the conference.

“In our conference, [EGR] is currently 1st but if we can beat them at the Conference meet, we’ll be co-champions with them,” Neat said.

The chance to be Conference champions is a once in a lifetime sort of shot for the FHU boys, and is something that everyone on the team is striving for.

“It’s been 5 years since a Forest Hills team has hoisted a championship trophy” Neat said. “So for the seniors, it will be an experience that they’ve never had and for the rest of the team, something to celebrate with this year’s seniors.”

Diepholz agrees, citing their rivalry with EGR as another huge incentive to come out on top.

“For me, bringing home this conference championship would be the biggest win of my high school career,” Diepholz said. “In my 4 years on this team, we have not beaten East once. This is our year to do it and the conference meet would be our best shot to rob them of their perfect streak.”

The swimmers and divers of FHU are not only competing to beat East, however. Above all else, each boy says that their other teammates are why they continue to work so hard, and that the bonding they have done over the course of their season has made them closer as a team.

“One of my favorite memories of the season was winter training,” Ball said. “That was because spending a ton of time bonding with the guys made it worthwhile.”

The Conference meet is filled with all sorts of tough competition, so preparing for it takes more than simply training. The boys who have not qualified for the State meet will be shaving their legs to cut down on their “drag,” and some will even shave their heads and arms. In addition, many will be wearing special swimsuits to decrease drag further and be more streamlined in the water.

“I am excited to wear my tech suit and shave,” said freshman Kazuya Iwatsu. “I’m hoping I can really cut down my times by suiting up.”

The Conference meet is one with many traditions, especially during the Finals portion on the second day. Although Neat has seen his fair share of Conference meets, his favorite part is one of these traditions: the walk-out parade.

“Watching our team finalists in the parade walk to the blocks for the Finals on Saturday is always amazing,” Neat said. “As well as the team creating a tunnel like effect and cheering for them, seeing your best get to be recognized is very cool.”

For the swimmers, the meet is also one with many emotions, the biggest being of excitement for when the Finals roll around.

“The fast swimming is great, of course, but I always enjoy the atmosphere of conference,” Diepholz said. “Everyone is very excited and ready for people to do great things in the pool.”

Ball agrees, saying that the atmosphere is “just incredible” and that “even for those of us who aren’t swimming for points, [watching Finals] is still a really exciting culmination to the season.”

Although the meet offers tough competition, the FHU boys are ready to rise to the challenge.

“We have a lot of swimmers to watch for this weekend,” Neat said.

As the competition looms large, so does the end of many swimming careers for seniors on the team, which is one reason why Diepholz is hoping to see a lot of students at the meet.

”I really hope we can get somewhat of a student section out on Saturday, Febuary 27, at noon for finals. It will be an incredible meet and it will be very exciting,” Diepholz said. “It’s most of the seniors’ last ever meet, so it would be awesome to see a crowd in the stands cheering on our team.”

As far as endings of seasons may go, the 2016 Conference meet will be one to remember for everyone involved; and the opportunity to see how all of the boys’ work will pay off there is one Neat does not take for granted.

“Every team and every season is different,” Neat said. “Whether we’re 1st, 2nd, 3rd or wherever after the Conference meet, just having the opportunity to watch each team grow and bond continues to be a special opportunity for me as their coach.”