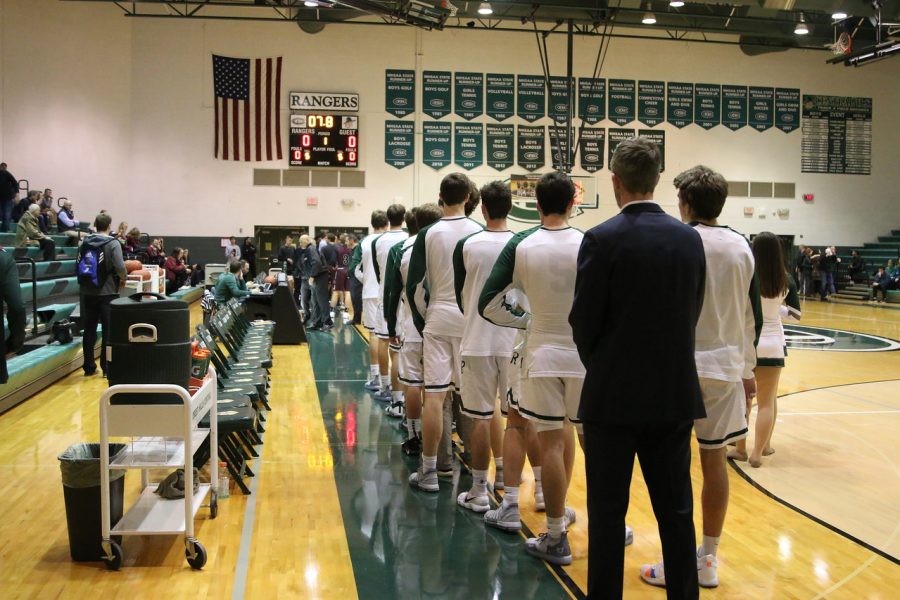 The boys varsity basketball team enters a pivotal conference game tomorrow night, as it hosts the Cedar Springs Red Hawks on the heels of its first conference win of the season. The Rangers played smothering defense and hit timely shots to defeat the Greenville Yellow Jackets 62-47 earlier this week. The Red Hawks have struggled early on this season and are 2-5 on the year.

Cedar Springs has blowout losses to two very good teams in the area: the Jenison Wildcats and the Forest Hills Northern Huskies. The Red Hawks’ two wins on the season were against Kent City and Holland.

The Red Hawks are led by their backcourt, which stars senior and third-year varsity point guard Dawson Wood. He is one of the best shooters in the area and is a great ball handler that can get to the rim at ease. Junior guard Trenton Cooper was on the varsity team last season and returns alongside Dawson Wood to head a very good backcourt. The Red Hawks’ frontcourt is led by two 6’4 sophomores in Mannie Barnett and Bryce Marvel. Mannie Barnett is a very athletic player who can at times be a matchup nightmare for the opposing frontcourt.

The FHC front-court trio of senior forwards Dan Deindorfer, Jake Ball, and Tate Hallock will have their hands full with Cedar Springs’ frontcourt. An advantage that the Rangers’ frontcourt could have is their experience. Dan is a four-year varsity player, and Jake and Tate are both in their second season on the varsity team. For the Red Hawks, both of their sophomore forwards are in their first season. The Rangers will look to attack them by getting the ball down low to Dan for easy buckets. The Red Hawks do not have very much depth in their frontcourt, so they could be in a deep hole if the Rangers are able to get them in foul trouble.

The Rangers’ backcourt of juniors Jimmy Scholler and Mitch Wilkinson, who combined for 36 points in the win over Greenville, will have a stiff test against Dawson Wood and Trenton Cooper. Jimmy and Dawson are two of the best guards in the West Michigan area. They both are great shooters and are able to both get to the rim easily and set up their teammates for open shots. Each will be a tough test for the other, especially because they both are very good on-ball defenders. Mitch is a tremendous defender and rebounder as of late and can really score the ball. He will have the advantage over Trenton Cooper, and a solid performance from Mitch will be one of the biggest keys in order to win on Friday night.

A big key to the game will be the Rangers’ depth. Having Tate and senior Josh Wise both coming off of injuries recently is big for the Rangers. Jake and seniors Jay Shields and Tom Tomsheck stepped up admirably in their absence, and that has created more depth for the Rangers than they had at the start of the season. If Jimmy is on his game as a scorer and a distributer to shooters like Mitch, Jay, and Josh for open shots, the Rangers will have a great chance to move to 2-1 in conference play this season.