Because of his love for learning, Andy Travis diversifies his interests across the board 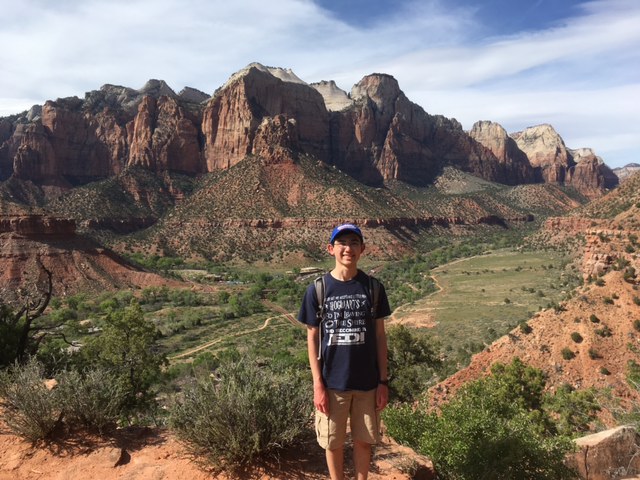 While junior Andy Travis’s knack for learning and school, among other things, is his own talent, the inspiration behind it actually stems from the classic story of the American Dream, as embodied by his grandparents.

“One set of my grandparents immigrated here, so they came here with really not a lot,” Andy said. “It really inspired me how they really showed so much perseverance in the face of the challenges, and now, they’re here.”

Because of his grandparents, Andy is much more appreciative of the immeasurable opportunities that FH has to offer the community.

“I’m really grateful for family, friends, and the community we have here,” Andy said. “We have a lot of people [in this community] who are willing to help you out.”

As a well-connected community member, Andy participates and excels in clubs, classes, and competitions, some of which include HOSA, Science Olympiad, and various math courses and competitions. Grateful and motivated by the opportunities he has, he has developed an unreserved passion for learning, finding it easy to discern and take away small lessons in everything.

“Even if [a class] isn’t really interesting, it’s still something where you can probably gain something from it,” Andy said. “I like [all of the classes I’ve taken], even if none of them are related.”

All that he does feeds his love for scholarship in different ways, but he particularly finds joy in competing with the teams he’s on.

“I love learning new things,” Andy said enthusiastically. “When we actually go to competitions, it’s fun to apply what you learned about the topic that you’re interested in and also hang out with friends the whole day.”

HOSA has especially made a big impact on Andy’s life because he is learning much more about the medical field while also gaining new leadership skills by serving as this chapter’s president. During competitions, he competes in an area that is the intersection of many interests of his– epidemiology– which combines math, science, and public health.

HOSA and Science Olympiad both supplement Andy’s other science classes by teaching him more about the sciences, which has in many ways revealed itself to be a passion of his.

However, while science may be one of his true interests, several aspects of math intrigue and interest him. Mainly, that is the reason why he became so advanced in that subject, deviating from the usual math curriculum so he could take dual enroll at GRCC to take Calculus 3 for the first semester of this year.

“Math is kind of fun because it’s like you’re solving puzzles,” Andy said. “Also, I love how you can apply it to different situations; like in physics, it’s really cool when you suddenly realize that there’s a reason [behind the numbers].”

Beyond his math curriculum, Andy also has honed some of his math skills by joining the Math Club, which is advised by teacher Daniel Garbowitz.

“Last year, I joined Math Club because I wasn’t taking a math class and didn’t want to forget all of the math,” Andy said. “Also, Mr. Garbowitz always has a cool thing to show us. It’s really cool how he’s so passionate about [math], and you can tell that he’s really excited about it.”

Because of Garbowitz and joining Math Club, many new doors were opened for Andy in the math world, like math-specific competitions and tests where students can earn money and also gage their proficiency. In the recent Michigan Math Prize competition that he competed in, he actually continued on much farther than most students usually do by making it to the second round of the competition.

Through all of the chaos of Andy’s hectic schedule both in and out of school, he has still found the time to pursue one of his long-standing hobbies: the violin. His love for music and his stringed instrument dates back much farther than many other high school musicians, making it all the easier when he transitioned to playing for the school.

“Ever since I was little, I’ve wanted to play [the violin],” Andy said. “I started early, and then in school for orchestra, I just decided to keep playing it. [I started playing] when I was seven [years old].”

By continuing both private lessons and also learning through the school’s orchestra program, Andy’s fondness for the violin has increased exponentially. The instrument, the class, and the teacher combined have made orchestra class more than worth it, and it definitely has given him a break from his otherwise strenuous workload.

“[Orchestra] is kind of my fun class,” Andy said. “Making music is a great way to wake up in the morning. [Mr. Pool] is just amazing.”

Further diversifying his interests past academics and the arts, Andy is also an avid hiker. With his family, he has spent his last several summers visiting and hiking in national parks, including Zion National Park and Yosemite. Throughout his life, he has conquered a total of eight national parks all over the U.S., enjoying the scenery and the wonder of it all.

“We went to Yosemite over the summer, and it was really cool to be so close to nature and see how pretty everything is,” Andy said. “I’ve been to several parks. I think it’s so amazing [how there are] so many land formations on our own continent [and how] you don’t need to go that far [to find beautiful landscapes].”

Although his resume and diverse array of extracurriculars are quite spectacular, an important realization he made was that intelligence and talent cannot be compared on the same scale.

“I’m not really that special,” Andy said with a smile. “I just kind of do my own thing, and I think everybody at this school is pretty special. I learn something new about people every day. Everybody is advanced in their own way.”

Constantly putting the needs of others first, no matter what he does, Andy makes it his mission to help others, something he accomplishes through learning and encouragement and hopes to do through joining the medical field later on.

Optimism and courage may have been the main motivators for the ancestors before him, and in the same way, they have also lived on in Andy as he also pursues what he loves and braves the world before him.

“[The key to high school is] to stay positive,” Andy said. “Even if there’s something that didn’t go well, there’s still a while to go where you can pick it back up. Nothing is ever that bad; there’s always something more to look forward to.”