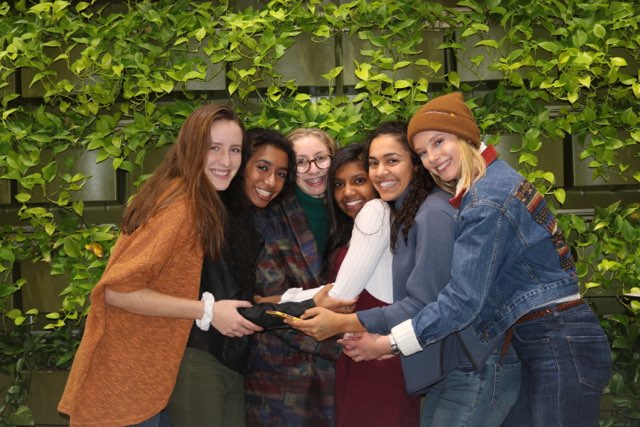 If you happened to enter Room 139 during sixth hour on any given day, you would find a group of dedicated students hard at work creating not only stories, but memories. Each of these students plays a role in producing nearly forty articles a week for the school’s online newspaper: The Central Trend.

Advised by Honors English 10 teacher Ken George, the staff works hard to keep students updated on events regarding sports and the general community, while also showcasing the students’ talent in opinionated writing.

“I think that this class is obviously very unconventional,” said senior Reena Mathews, one of the newspaper’s three Editors in Chief. “A journalism class, in general, isn’t the traditional type of class that you take in high school, but specifically, the way we do it here at FHC is very different than most schools. It’s very independent, and it’s 100% student-run.”

The students are the driving force behind The Central Trend. They come up with their own story ideas and take the steps necessary to properly execute them. Through hours of hard work, they have all developed into talented journalists who each bring something special to the table.

The inviting atmosphere of Room 139 is another product of its occupants’ hard work. The thrift store furniture, blue walls, and Christmas lights make the classroom unique from others in the school, and it was all designed by the students themselves.

Within this comforting and homey atmosphere, the students are like a family. Every one of them has made a huge time commitment and devoted themselves to the success of the newspaper. These common decisions have united them and forged lasting bonds between the students.

“Everyone is just really passionate about what we do and wants to make it the best and be there for the people around them,” said senior Nisha Rajakrishna, another of the Editors in Chief. “The fact that we’re so close and that we have a lot of genuinely kind people in there means that the people in that room [each have] their own thing to add that makes them a part of what we do.”

Currently, The Central Trend is on the brink of an annual change to their staff. Students wishing to join must first complete the intro class: Writing for Publication, which is also taught by George. For the first nine weeks of the class, he prepares them and teaches them everything they need to know. For the second nine weeks of the semester, students get to experience what it’s like to be on staff. At the end of the semester, they make a final decision regarding their permanence on staff.

However, Writing for Publication was a bit unconventional this year. Rather than taking place at a separate time than the advanced class, it’s during the same hour. The students in the class had the opportunity to see the inner workings of The Central Trend while they learned.

This, of course, presented a few obstacles. Learning to share the space was difficult to navigate at first, but eventually, the two classes found a rhythm.

“I think if we were in a completely different hour and not with the actual Central Trend, it would really, really feel like we were just like the newbies,” junior Meredith Vanskiver said. “I feel like because we’re all in the same area, it just feels more like a transition.”

Meredith is one of the students becoming official staff members at the beginning of next semester. She is accompanied by nine others who wish to continue putting the necessary time and effort into The Central Trend.

Another difference this year was the increased class size. When it came time for the Writing for Publication students to join The Central Trend, the number of stories being produced was far more than anybody was used to. The workload was overwhelming for the editors, but ultimately, the changes resulted in increased camaraderie between the two classes and a higher quality of writing.

“I think we really connected as a group more than in past years,” said senior Susannah Bennett, also Editor in Chief. “We’re in the same hour, and we have meetings together. We talk together, and we edit each other’s papers. So there’s just a lot more connection.”

The Writing for Publication students have been temporarily on staff since early November. While there may have been initial apprehension among them, they have each individually grown to be better writers and learned valuable lessons through the process.

“I feel like it’s just like a muscle,” Meredith said. “Like, you have to keep practicing and keep using it, and that’s how you get better. I definitely think that it’s worked for me.”

Another first this year was the opportunity for the Writing for Publication students to attend MIPA, a journalism and media conference held in Lansing. About 15 of the students from the intro class attended the conference, and it served to not only further their knowledge of journalism, but also connect them more with the official staff of The Central Trend.

“I think it helped a lot with the bonding with the other people in the class,” said junior Amanda Bartolovic, another student joining The Central Trend second semester. “Before it was really segregated. It was like, the intro class is focusing on learning to write well, and the Advanced Writing for Publication was kind of just like doing their own thing. When we went to MIPA, it’s kind of like we all came together.”

Amanda, like many students, joined The Central Trend after hearing George talk about it in Honors English 10. Her love for writing and her level of comfort in Room 139 made the decision an easy one. Being in George’s room didn’t feel like the rest of high school classes.

George is grateful that he gets to provide this opportunity to students. He loves to let them take charge and make decisions with nothing more than a little guidance from him.

“I love how student-driven it is,” George said. “I sit at my desk, and if someone needs me, they need me. But it is not my show.”

George strongly believes that The Central Trend is the best high school news site in that state. He expects the best from his students because he knows they are capable of it. His plans for the future of the site involves more student interaction. Although The Central Trend is already experiencing high levels of success, he wants to make it even better.

George’s plan for success is achievable through his support of the students in his class. It’s eminently apparent to each of them that he cares deeply and wants them to succeed.

“I just think Mr. George inspires so many people,” said junior Olivia Luplow. “I think a lot of people in this school have so much talent and so much to bring, but people aren’t always motivated to do their best. Since Mr. George is such a supportive teacher and just a nice person, we want to put out our best for him.”

There’s no doubt that The Central Trend is the product of many people’s valuable time and efforts. Like any community, each member plays a vital role in the overall atmosphere. They are consistently working hard, stepping outside of their comfort zone, and interacting like a family.

“I love the [students],” George said. “Just like when sixth hour hits, I just know that I get to hang out with the best kids in the whole school in a nice, relaxed atmosphere, and they pay me to do it. So it can’t be bad.”