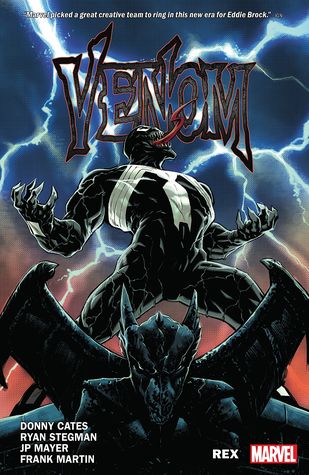 Donny Cates always brings fresh and unique stories to the Marvel comics characters he writes for. Whether he’s putting Doctor Strange and other unusual heroes up against Mephisto or taking a new Ghost Rider on a journey across space, I’m always intrigued and ecstatic whenever Cates weaves a new story. With Venom, Cates brings a story loaded with mythology that shows just how riveting and captivating Eddie Brock and the symbiote can be.

Venom is a new series written by Donny Cates and illustrated by Ryan Stegman that follows the story of Eddie Brock, a reporter with a tarnished reputation who gains his powers from an alien organism called the symbiote when it bonds with him. As the story begins, we see how Eddie’s relationship with his symbiote is in shambles. The symbiote induces bizarre nightmares while Eddie sleeps, and he’s forced to take antipsychotics to drown out the symbiote’s seemingly broken mind. After a violent incident where Eddie loses control of his symbiote, we are dragged into a world of insanity. Stakes are high as Eddie faces an incredibly powerful individual who has been manipulating the symbiotes.

The story Cates delivers with Venom is brilliant. The plot is something that the reader will become invested in immediately, and the characters are refreshing and compelling. Exposition is carried out effectively through flashbacks from characters and frightening visions. Eddie’s relationship with the symbiote plays a large role in Venom which really reveals different aspects of characters. It makes us really wonder who Eddie Brock is without the symbiote. Venom also delves deep into the character and Marvel mythology while building upon it with some astonishing surprises.

Ryan Stegman’s art can only be described of nothing short of spectacular. From the musculature to the leathery wings of the symbiotes, Stegman has a flair for capturing the texture of everything which helps to fully immerse the reader into the story. Stegman was clearly the perfect choice as the penciler for the series since the story allows him to showcase his range through art that is visually striking and at times psychedelic. The art both enhances the story and makes it more gripping.

Marvel is putting out many good comics, but at the moment, Venom is definitely one of my favorites. I haven’t felt as invested as I am in a story like this for quite a while. Something as wild and vivid as Donny Cate’s Venom places it as one of the character’s best stories.