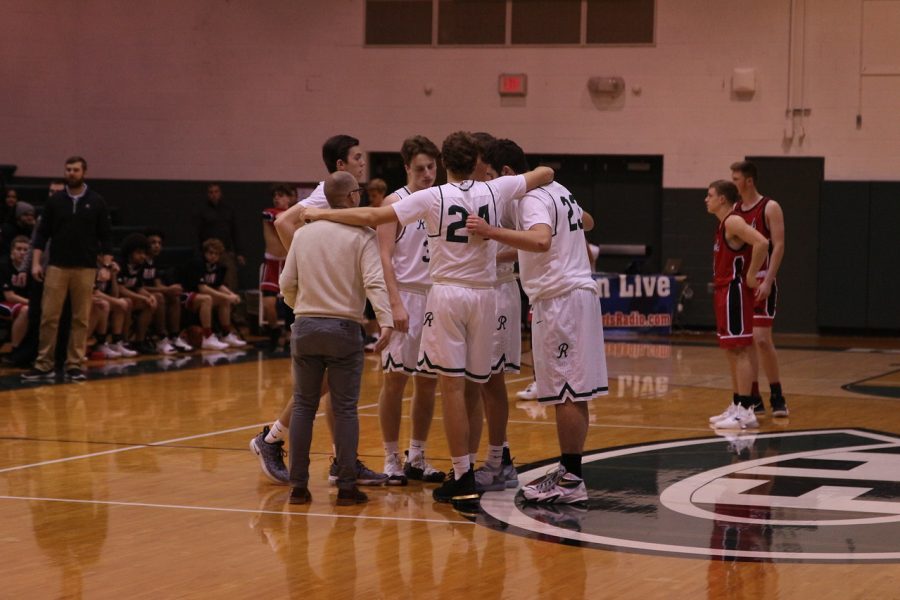 Junior point guard Jimmy Scholler rewrote the record books, although not in the way most people would think, as he helped lead the boys varsity basketball team to a 62-42 victory over the Cedar Springs Red Hawks. Jimmy, who was averaging nearly 20 points a game coming into this matchup, finished with just 2. Instead, it was his ability to find others that put him into the record books. Jimmy had 6 rebounds and dished out a single-game record in Forest Hills Central history of 13 assists.

“Jimmy didn’t take as many shots as he usually does,” head coach Kyle Carhart said. “He took what the defense gave him tonight, and that resulted in a ton of open looks for his teammates. He gets the ball to his teammates regularly, so it wasn’t very surprising, but he did a great job tonight.”

Despite an unusual start to the game that saw the Red Hawks shooting two free throws due to the Rangers not having their scorebook present when the referees went to check it, the Rangers got off to a good start in the opening quarter. Seniors Dan Deindorfer and Josh Wise and junior Mitch Wilkinson combined for all 16 of the Rangers points in the first. Jimmy had 5 of his 13 assists in the quarter with one coming on a thunderous one-handed slam by Mitch, and the Rangers led 16-10 after the first.

“The dunk was definitely cool,” said Mitch, who scored a game-high 20 points on the night. “Taking off I wasn’t exactly sure if I got high enough, but thankfully I did. I thought that Jimmy did a great job of finding all of us all night for wide-open looks.”

The Red Hawks climbed back within 4 points and kept the score at that margin until 2:30 left in the second quarter. Josh, who scored 10 points off the bench, hit a long three, followed by a tough bucket and-one from Dan, who converted on the three-point play. Dan was impressive all night and scored 8 of his 18 points in the second quarter. Mitch capped off the string of buckets with a finger roll off of a great pass from senior Tate Hallock to end the half on an 8-0 run. The Rangers led 30-18 at halftime with Jimmy not scoring a single point, but he finished with 9 of his assist in the first half.

“We executed a lot better towards the end of the quarter defensively,” Carhart said. “Doing that gives us the opportunity to run in transition, which we do a really good job of.”

Mitch caught fire from behind the arc to start the second half, as he knocked down three of his four total three-point shots on the night in the third quarter. Jimmy added 3 more assists that tied him with the record of 12, previously set by 2018 graduate Ryan Dunn. He also added his only 2 points on the night and 5 rebounds in the quarter, as the Rangers led 47-29 at the end of three quarters of play. The Rangers were able to assert their dominance on the glass in the quarter, and they were able to win the rebounding battle 39-31 at the end of the night.

“We struggled to rebound early in the season,” Carhart said, “but we’ve really started to rebound the ball very well lately, and I’ve been really proud of my guys and how physical they’ve been.”

With six minutes remaining, Jimmy threw a beautiful bounce pass on a backdoor cut by senior Jay Shields, who made the layup to give Jimmy the record all to himself with 13 assists. Jimmy and all the starters got a round of applause as they came off the floor and a fresh five went in the game with a comfortable lead. The Rangers outscored Cedar Springs 15-13 in the final quarter to seal the 62-42 victory.

“The record is definitely a cool thing to get,” Jimmy said. “Beating Ryan’s record is awesome because I love RD, I learned so much from him last season. Honestly I’m just happy that we were able to get the win, that’s always the most important thing every game.”

With the win, the Rangers improve to 6-3 on the season and 2-1 in the OK White. FHC will be back in action next Tuesday night when they host the Lowell Red Arrows.