DECA dominates at districts through determination and dedication 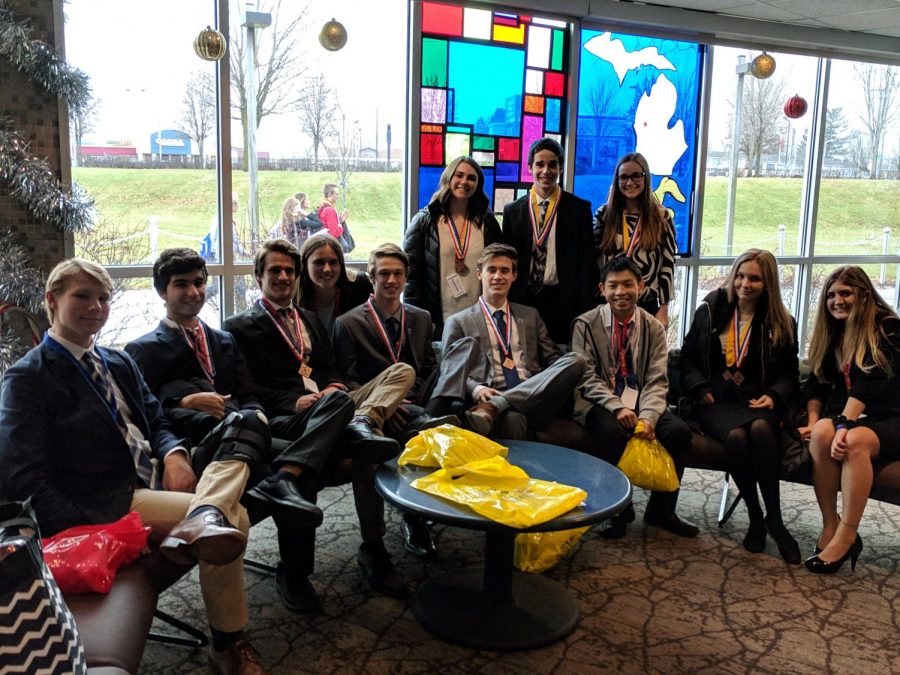 With nothing but a scrap piece of paper and a pen, senior Will Clancy and his partner had a mere thirty minutes to prepare a promotional plan for a company. Given their fictional scenario minutes before— which was a small travel-based company looking to diversify their products and expand into other cities across the country— Will and senior Tess Bond headed into a separate room to formulate their plan.

After thirty minutes of planning and preparing, Will and Tess were ready to present their promotional plan to the judges—a task that determines their qualification for the state competition.

“We took [the] piece of paper,” Will said, “went into [a] separate room with the judge, and we presented our ideas in a business presentation type of way.”

The company they were presenting for sold travel gear for small families while on vacation, so their presentation centered around practical products for the fictional families. Throughout the presentation, they were asked simple questions and interacted with the judges.

Immediately following the presentation, though, the judges asked more hard-hitting, clarifying questions—which were asked on the spot and can’t be prepared for.

Testing their quick-thinking skills, Will and Tess were presented with a variety of thought-provoking questions in a matter of minutes.

“One of the questions [the judge] asked us was ‘We’re looking to make money, and we want to find another market to hit besides just families with small children,’ ” Will said. “We came up with hitting [the teenager market] by renting out video games for hotel rooms and things like that.”

The element of surprise with the questions was daunting for Will, and he distinctly remembers the difficulty of the specific questions. While they did have knowledge of business, marketing, and entrepreneurship under their belts, it’s tough to think of an answer to a distinct question so quickly.

“It is pretty nerve-wracking because you really have to come up with an answer right on the spot on a topic that you don’t know a ton about,” Will said. “I don’t know much about what families with small children need on a vacation because I don’t deal with small children— ever. It was a little tricky to quickly come up with an answer, but you kind of figure out an answer whether you have to make it up or not.”

The scores from the role-play, which was the business presentation, and the written test are the determining factors for advancing to the state competition. Medals are given for top test scores and role-play scores, and then an additional medal is given for state qualification.

Will and Tess earned a perfect role-play score, qualifying them for states in early March. Will, specifically, earned a medal for performing well on the test.

Senior Evan Metaj and his partner, senior Alec Norris, experienced a similar morning to Tess and Will’s, but their results were drastically different— much to Evan’s dismay.

Evan, a second-year DECA member, and Alec felt prepared for their role-play scenario— more than prepared, even.

“I [have] a lot of experience under my belt,” Evan said. “I felt very prepared [because I knew] what it was like last year, and [I knew] the standards that I needed to succeed.”

Walking into the room with the thirty minutes he had to prepare a similar presentation to Will’s, Evan felt confident. Will had chosen the travel and tourism category for the business presentation because it interested him the most, but for Evan and Alec, it was a different story.

“We chose entrepreneurship because we are very creative individuals,” Evan said. “[We] would probably be billionaires if we were business partners.”

With experience, self-confidence, and a scrap piece of paper, Evan and Alec were eager to use every last second of their thirty-minute time limit. Already having half an hour of practice for the day they would eventually become billionaires, Evan and Alec emerged from the room with an aura of self-confidence like no other.

“Alec and I absolutely crushed [the role-play],” said Evan with a tinge of sarcasm, whose scenario was to advertise a pottery company through various social media platforms. “It was probably the best role-play ever in DECA history.”

Evan and Alec qualified for states, but it was their high test scores that determined their qualification— not the best role-play in DECA history.

“We should have gotten the role-play performance medal,” Evan admitted. “We achieved a very high score, and I was very confused on how we did not get the medal.”

Recovering from their devastating loss, Evan and Alec are now preparing for states, which they did manage to qualify for because of their performance on the written test.

DECA as a whole is currently in the midst of their preparations for states, including fourth-year Advisor, Kristin O’Brien.

With numbers fluctuating from 70 state qualifiers her second year to 17 qualifiers currently, planning varies each year for the competitions. Always remaining a helping hand and shoulder of support, O’Brien can tell that this year, the smaller group of students are driven, dedicated, and determined.

“I like having a little bit [of a] smaller group,” O’Brien said, “because you can tell that people are really dedicated. I feel like it’s quality over quantity.”

Not only do students have to prepare for two role-plays for states, but they also have to take their written test at school prior to the competition. With the early-March competition date quickly approaching, now is the time for students to start practicing for their role-plays and studying for the tests.

Advancing to nationals after states is a difficult task, seeing as 10 out of the 35 qualifiers from last year advanced, but the determined DECA members are more than ready for the hard work and dedication that these coming months will bring.

States are soon, but in Evan’s eyes, nationals are just around the corner.

“[Alec and I] were very excited [that we qualified for states],” Evan said, “but we still have a lot to do before we make it to nationals.”