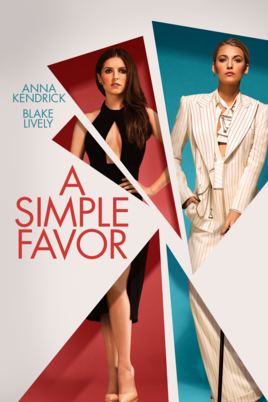 As I mindlessly scrolled through numerous movie options on my TV screen, the remote stumbled onto the new movie A Simple Favor. After watching the intense and humor-filled trailer, I quickly rented the film that proved to be a refreshing and comedic success.

In the film, Stephanie Smothers (Anna Kendrick) is an ambitious single mother living with her son Miles. After the death of her husband and brother, she began making vlogs for other mothers about tips for parenting and fun things to do with children. After her son Miles befriends fellow classmate Nicky, Stephanie meets his gorgeous and busy mother Emily Nelson (Blake Lively). The two mothers are as opposite as truths and lies, but they agree to a playdate for their children, and the two become fast friends. Emily lives in a contemporary Connecticut home with her husband and son; she works for a well-known fashion designer who provides her with the money needed to keep up with her family’s lifestyle. Her husband Sean Townsend (Henry Golding) is a struggling English professor at a local college who happens to have written one of Stephanie’s favorite books.

Emily’s life is an enormous mystery to nearly everyone who knows her. Even after the two mothers have established each other as best friends, there are still so many things that just do not make sense to Stephanie about Emily’s life. One day, Emily asks Stephanie for a simple favor: pick up Nicky from school. At the end of the day, nobody is able to contact Emily, and she is determined to be missing. As the weeks go by, Stephanie, Sean, police, and Stephanie’s viewers work to find the missing woman all while traveling through love, pain, and fear.

While the movie followed an intriguing mystery, the scenes full of intensity and pressure were relieved with kicks of comedy that came out of nowhere. The humor that filled the scenes was perfectly placed into the script; it never seemed forced but was rather purposeful. The words spoken from the characters fit their personalities like a glove, and the appearance of each and every actor fit the role of today’s well-to-do families in high-end cities.

Directed by Paul Feig in 2018, the film stars greatly-known actors including Kendrick and Lively who are able to make the movie feel as if it is truly happening right before your eyes. Every emotion they portray can truly be felt by the audience on the other side of the screen. The words of humor, sadness, and worry can all be heard through their voices and truly makes the movie much more realistic than the plot may actually be.

As I intently watched A Simple Favor, I was reminded of the 2015 film Paper Towns. The two movies both entail a little bit of romance along with the greater issue of solving an unheard of mystery. A similar meaning is also found deep within the scenes of the two movies. The films both show the audience the issues surrounding trust in today’s society. People may jump into things without truly knowing the people they are surrounding their lives with. The mistake many people are making too often in today’s world is inflicting pain into the lives of many people that could have easily been avoided.

As I watched each and every scene in the movie, I never found my eyes stuck to my phone or my mind to be wandering off towards something else. Every scene had me trapped on the couch and made me wish the movie would never come to an end. As the credits rolled and the screen turned to black, my hand reached for the remote and gently pressed the “play from beginning” button.