From engineering to riding horses, Alaina Briggs revels in all aspects of her day 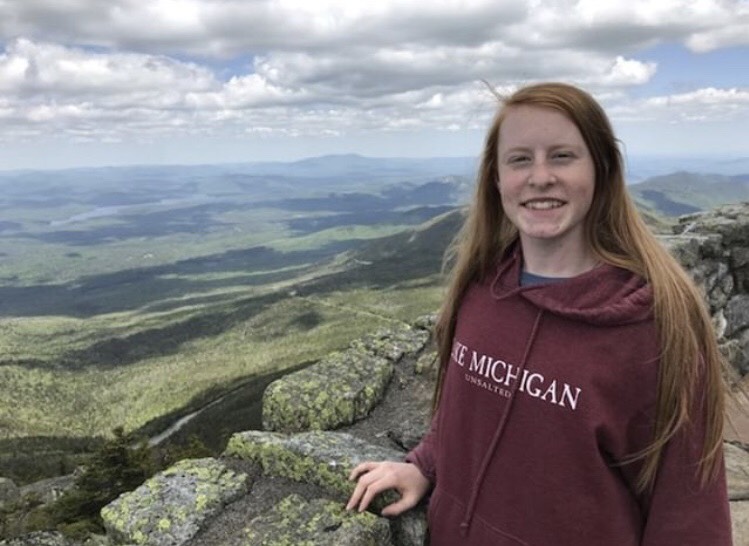 The ring of the first-hour bell initiates the beginning of sophomore Alaina Briggs’ school day. With a hazy mind that accompanies her early mornings, she takes pleasure in not having to put her brain into action immediately. Instead, bass in hand, Alaina eases into her day with playing music.

“I like having orchestra in the morning,” Alaina said. “I just like waking up and playing, rather than trying to learn or something, and [I feel] generally pretty happy when I play. I mean, it can be frustrating trying to learn certain fingerings or notes, but it just takes practice.”

For the past five years, Alaina has found herself side by side with a string instrument, first playing the violin for two years and then switching to the bass. The exchange of instruments mainly occurred because, in eighth grade, no one in her class played the bass; however, her original selfless alteration played out favorably for her, as she now prefers the bass’ range and tone over the violin’s.

Her involvement in music has given her extended opportunities outside of the traditional classroom setting. Alaina played in the pit orchestra for Goodwillie Environmental School’s play this year and frequently plays the electric bass in church as well. Overall, playing in the orchestra, whether in or out of school, is where Alaina finds solace.

“I have a lot of friends in orchestra, so it’s fun being in class with them,” Alaina said. “It’s also just kind of a free hour of the day where I’m not as stressed. I can just be more chill.”

As the few hours of the morning trickle away from Alaina after orchestra, she returns to an unperturbed state once again a few hours later. Instead of through music, Alaina indulges herself in the joy she feels when she goes to FHN halfway through her school day for her involvement in the STEM program, which is a program for those interested in mainly math and sciences.

Since her freshman year, Alaina’s focus on math, science, and engineering has derived from the program, and the experience so far has been welcoming and exciting for various reasons.

“[Being at FHN] is probably like my better half of the day,” Alaina said, “because I’m less stressed, and I have friends in all the classes. It was kind of awkward for the first couple of months because I didn’t know as many people from FHN. But now that I know everyone, and I started a lot of friendships there.”

To be a part of the program in the first place, it took multiple steps of an application process, including an interview in eighth grade. Alaina, who was a grade level ahead in math at the time of the application, knew about the program before many others in her grade and felt ready to take on the challenge.

“I definitely wanted to get in more than other people,” said Alaina, who knew about the program through her older sister. “I was just so happy when I got into it because I definitely would not be able to get through high school without it, honestly.”

Alaina’s work during her time at FHN consists mainly of project-based education, especially in her engineering class. During one group project, Alaina and her friends had the opportunity to take apart an engine, and now, they’re working on creating a system that shoots rounds of ammo without reloading.

For her current project, Alaina is using an online program to 3D print parts, keying in her knowledge of geometry and brainstorming.

“It’s kind of fun working with all of my friends,” said Alaina, who prefers groups projects. “[Being a part of the STEM program] is challenging, but I feel like I’ve gotten a lot out of it. I always feel like there’s somebody I can talk to in that class too.”

Over the next few years until the end of high school, Alaina will continue spending half of her school day exploring ideas in projects and learning about engineering, consequently expanding her education in this field and creating lasting bonds with classmates.

After her school day ends with her time at FHN, Alaina frequently spends afternoons with another stress-free and comfortable aspect of her day: riding horses.

She has been riding horses for as long as she remembers, originally starting on backyard horses to familiarize herself with it. After fourth grade, she vacillated among several options of barns and finally landed on one, and she’s continued to ride in the fall season with the equestrian team.

One of Alaina’s favorite aspects of riding horses are the shows that she often travels around the state for, as well as occasionally around the country. Satisfaction and joy bubble inside of her when she does well while riding in shows because the hard work pays off for Alaina during these moments.

“I ride all year long working for that moment,” Alaina said. “Especially when I’m showing at bigger shows, it’s always super cool to beat people who spend like a lot more money on their horses and have the money to just buy a really good horse. Whereas, I’m trying to train my horse to do well.”

Alaina works hard for those grand moments of accomplishment, but she also enjoys the simple joy of riding horses itself too. It’s a secure and relaxed part of her day, as well as her life.

“I like how familiar it is to me,” Alaina said. “I love the feeling of accomplishment at horse shows, and I love going to shows with my friends. I definitely feel like I’m going to come back to it later in life because [riding horses] is definitely my favorite feeling.”