A love letter of some sort 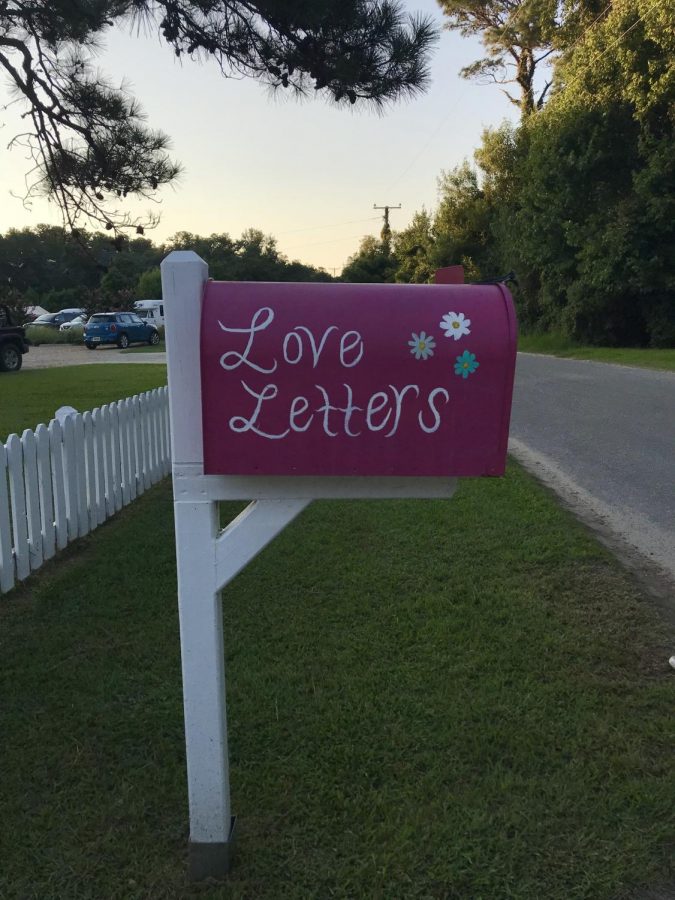 I once found my feet trudging along, almost involuntarily, with no particular destination down a narrow, gravel road. Where the road led to remained unknown, but I continued on anyway. Maybe it was the pure comfort and warmth of standing alongside the pine trees in the delicate August air that made me obliviously continue, tempting the unknown.

My minuscule adventure eventually led to an encounter with a little mailbox hidden at the end of the road. The peculiarity of the mailbox caught my attention. It read “love letters” on the side of its tin composition, and sure enough, words of infatuation scribbled on torn pieces of notebook paper sat inside of it.

I immediately felt a compulsion to write my own letter. I didn’t know why. My words and thoughts clamored to unleash themselves, struggling to join the weight of words in the box. But the language’s rush, its impassioned desire, only resulted in a series of tumbles and falls. I became entangled in my own thoughts. I didn’t know who to write it to, so I wrote nothing at all.

Maybe while searching for someone to write to, I should’ve employed the idea of writing to something instead. Now, my thoughts beg to be exposed.

I often find traces of you everywhere I go. I walk down a street, and unsurprisingly, your fingerprints are scattered along the sidewalk and buildings, staining them with your leftover adoration. I go to school, and your prevalent fervor jumps from friend to friend, from child to child, innocently linking them together.

You make your existence an obvious presence, yet at the same time, the whispers throughout the streets and throughout the halls tell me of your rarity. They tap on my shoulder, eager and avid, letting me know they’ve struck gold.

Gold? I find that absurd.

All of the gold in the world fits into three Olympic swimming pools, but you, Love, you are extravagantly greater than 246 feet.

I see you in between the hands of my neighbors. I see you on the lawn of Jay’s elaborate house. I see you live in Hazel’s dying eyes. Your work is seemingly ubiquitous, but all of the whispers remain fixed on your supposed rarity.

You have an erraticness to you. Wires of your ambiguity constantly loop over one another, becoming tangled and disarrayed; therefore, you can never simply be one distinct embodiment. Instead, your presence is an interwoven mess of emotions. You are a blend of warmth, bliss, and tragedy. You are dusk, and you are dawn. You are everything, and you are nothing.

Conceivably, the complexity that derives from your existence lives in a puddle of mud.

No offense, but I believe that people’s tendencies of looking past you stem from your characterized mess.

But just because I see you often, doesn’t mean I understand you and your ambiguity either. Once again, I can’t blame the others because sometimes I am one of them. The only difference is that I choose to hold on to the thought that you are ceaseless because, without you, humanity is simply empty.

Others may disagree with your vitality. They mock your mess and spit at your cliches like you’re a lousy pile of insincerity. Their whispers describe you not of gold, but of fool’s gold, all artificial and faux.

I believe the reason for their bitterness is because they only see parts of you or what they think is you.

They stamp a definition onto you, a permanent name tag, confusing you of solely existing between two people in a romantic way. What they don’t see is that you’re so much more than that.

You are the cliches and the foolish chocolate hearts.

But you are also my mother’s smile as I took my first steps.

You are the triumphant force behind the hours of dedication people put into their craft.

You are the hope found in the eyes of the struggling people, those trudging through adversity and misfortune because of whatever it is in their life that’s worth living for.

Thus, I find it unreasonable when people skip by all of your fingerprints. I think their search narrows you down to a perfect version of you, the versions found in the books and movies. When instead, you’re a mess, a beautiful, wicked mess.

Maybe I don’t necessarily understand your mess, but I can only hope that it’s there, stringing people to each other and to the world.