Osaka Steakhouse Proves to Know a Thing About Sushi 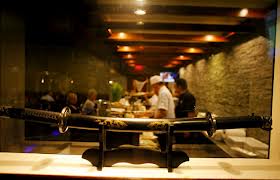 I have an obsession with sushi. I could have just eaten a three-course meal with my stomach fully bloated, and if you offered me a California Roll I would find room for at least one piece. Considering I will eat it from pretty much anywhere, I have come to know what constitutes good quality sushi from bad quality sushi.

At first I was a little timid when considering eating sushi from a self-proclaimed steakhouse, but Osaka does offer half price for any roll every Wednesday so I set aside my inhibitions in the name of my checking account.

I strolled into Osaka where I was promptly greeted by the hostess with the question, “Two for sushi?” Was my love for sushi really that apparent to the outside world? Either way I was happy with the minimal effort I had to put in in order to get a booth. Surprisingly enough, it was a pretty lively place for 4:00 PM on a Wednesday, yet not enough for it to slow down the service.

Almost as quickly as the hostess met us at the door,  full glasses of ice water and menus were set on our table along with our drinks being ordered. After both me and my dinner guest claimed we were just fine with water, thank you, the waitress left us alone to skim the extensive menu. Around twenty different regular and sixteen different specialty rolls provided more than enough to choose from. The fish variety ranged from the typical crab meat to the more exotic eel. Despite the seemingly endless potential selections, I decided to stick with my safe order of one California roll and one avocado roll.

Quick was an apparent reoccurring theme for Osaka because not 15 minutes after we placed our order, our food was placed on our table and ready to enter my waiting stomach.

My first bite of the California roll proved to have it’s own distinct style compared to others I had before that I had enjoyed. Less rice and more cucumber and avocado created an even ratio that provided just enough mix between sweet and savory that I didn’t know existed until now. After inhaling the California roll, I moved on to the avocado roll.

The rice with this particular roll was wrapped in the somewhat nectarous seaweed that was commonplace for sushi. Surprisingly, this simple change from the sticky rice being inside the roll as opposed to garnishing the outside gave a whole new taste that I was not expecting. Buttery avocado juxtaposed the sweetness of the rice and seaweed harmoniously resulting in a clean plate and fulfilled appetite within minutes.

The employees were polite without being fake and overly friendly, something that I greatly appreciate in restaurants and retail stores alike. Getting people served as quick as possible was made their main focus. Collectively, we were probably in the restaurant for a concise thirty minutes.

As far as the atmosphere of Osaka, the booths and tables were spaced out enough so that you felt as though you had your own private space and the dark interior furniture and walls made the sushi restaurant comparative to a soothing lounge.

Most importantly, the price was an unbeatable $20 for six rolls, each roll having 6-8 pieces.

If you are as much of a sushi freak as I am, or even if you enjoy the occasional roll, I highly suggest you take advantage of the half-off sushi Wednesday at Osaka. I can say with confidence that your experience will be one of satisfaction and leave your wallet and stomach content.